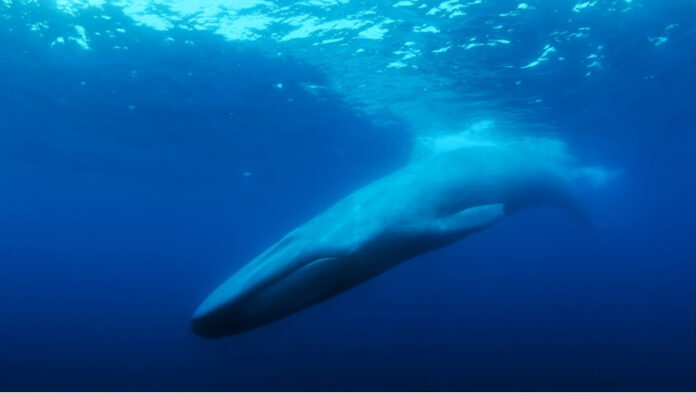 THE LONELIEST WHALE: THE SEARCH FOR 52 is a documentary quest written and directed by award winning filmmaker Joshua Zeman in his attempt to record any trace of the “52 Hertz” Whale. Zeman has been at the forefront of investigative documentaries for the past decade. His most recent work was the hit Netflix docuseries, The Sons of Sam: Descent into Darkness. His critically-acclaimed film Cropsey, a look into the disappearance of five children, is widely received to be a terrifyingly good horror documentary.

Scientists believe that this one of a kind whale has spent its entire life in solitude. The song of this particular whale has a frequency very different from any other whale known in existence. The 52 Hertz Whale, aka “52” was originally discovered in 1989 by marine biologist Bill Watkins. Watkins figured out that the sound the Navy was picking up on was actually a whale and not a submarine. Most whales sing or communicate around a frequency of 20 Hertz. The unidentified yet, popularized lone whale has a unique song frequency of 52 Hertz. Thus, the name he/she was given. These songs are below the normal threshold of what humans can hear. Over the last 3 decades, “52” has become a global sensation capturing the hearts of fans around the world.

Fascinated by the ideal fantasy (like the novel by Herman Melville, Moby Dick, minus the revenge killing plot), Zeman gathers enough funding, a rag-tag team of scientists, some geriatric Navy sonar equipment (with some newer technology) and embarks on an engrossing 7 day journey to find “52”. Zeman and his team produce beautiful oceanic imagery, interview scientists/researchers, collect data from blue and fin whale pods and do their best to be as informative as can be regarding what little is known about this mysterious whale. This is the only film that set out in search of 52 since its initial discovery in 1989.

Viewers will explore what this whale’s lonely plight can teach us — not just about our changing relationship to the oceans, but to each other and the role we that pertains the oceanic ecosystem. Zeman succeeds at breaking open the discretion surrounding The Loneliest Whale but fails to fully recognize and comprehend the difficulties that keep this whale at a deliberate distance. That disappointment is not properly acknowledged but is clearly visible among the faces of Zeman and the team he embarks with.

My frustration grows with every obscene circumstance hindering their nautical quest that wasn’t devised ahead of time. It’s of no fault, nor secret that researchers and scientists are limited, if not deprived, of the proper tools, etc, to do thorough investigations as well as the vast magnitude of industrial ships occupying the sea. Given that commonly known tidbit of information, their adventure should’ve been planned for better preparation. It also goes to show that the majority of our global leaders are running a shit-show of the so-called “functioning” of this planet. Sinking all aspects of life and prohibiting that knowledge into a hellacious nonexistence!

Joshua Zemans quest to document The Loneliest Whale has well intentions but misses a great opportunity to expose the complicated and diminishing platform of understanding marine biology. Researchers, environmentalists, and scientists require time, funding, up-to-date equipment, and protection to garner answers entailing the oceanic subject matter. Rarely do any of those necessities which, especially these days, are ever granted to those just trying to do the right thing. Nor was there any guidance on how or what, we the viewers, could do to help. Even if that meant reaching out to political affiliates/outlets to attract attention to donating funds. Sadly, those potential requests could have been but were not addressed.

Even when these science/environment groups are finally able to get to sea, they are severely overshadowed by the gargantuanism of the global, trillion dollar corporate shipping industry. Collecting data is nearly impossible and/or may take several attempts over what could be, a lengthy period of time. The oceanic ecosystem that marine life survives on is drastically interrupted, if not destroyed. Most countries are not interested in producing laws and/or regulations to protect our oceans either.  It’s no real wonder as to why “52” (and who knows what other species and areas are out there) haven’t exactly been found. Although admirable, Zeman is way over his head. I don’t think he quite comprehends the complexity for the thought that this beloved task could be so easily explored.

As for “52”, there is good news. Despite all the setbacks, Zeman and the team he journeys with were able to collect some vital information. It is learned that this unique whale is not as lonely as most think/believe. “52” is known to travel with other pods, such as fin and blue whales so, he/she is never really alone. A DNA test taken by scientists hypothesized that he/she may even be a hybrid of both.

It is also discovered that the “52” whale song can be heard in two different locations at close to the same time. To researchers, scientists, Zeman and to viewers, this implies that there may be more than one of these hybrid whales and are ecstatic about this new insight. Unfortunately, trying to acquire the ability to dive further into this may take years, if not longer. Perhaps, not even at all. At least we have the assurance that “52” is not completely alone and that their could even be another of his/her breed. Thankfully, “52” is still thriving after all these years!

The Loneliest Whale: The Search for 52 will be in theaters July 9th and on demand July 16th.