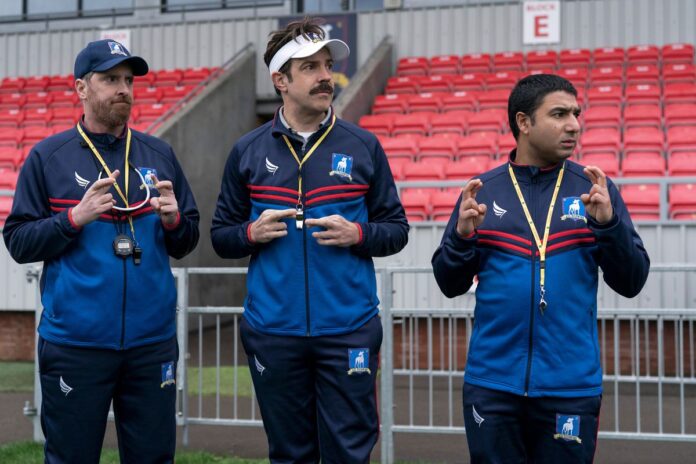 One of the few bright spots in 2020 was Apple TV+’s Ted Lasso. A surprisingly touching comedy about an American football coach who moves to England to led a professional soccer team, the series found its inspiration from a series of NBC Sport commercials and is now nominated for 20 Emmy awards. The show slowly built a following and a reputation for finding the good in the cynical. Now, it’s back for its second season and though it still has the kind, hilarious, and folksy Lasso spirit we’ve come to know, this time around the show makes a few bad passes.

Created by Jason Sudeikis, Brandan Hunt, Joe Kelly, and Bill Lawrence, Ted Lasso left its characters all over the place last year. The entire AFC Richmond Greyhound football team was officially relegated to a lower division after losing to their pompous and rude former teammate Jamie Tartt’s (Phil Dunster) new team Manchester City. Teamowner Rebecca Walton (Hannah Waddingham) finally came clean to Ted (Sudeikis) that she set him up to fail as coach to exact revenge on her ex-husband. While Ted forgave her, his own demons and anxiety around his divorce continued to linger.

Ted was very much a static figure last season, with most of the characters changed by him, season two tests everything we’ve come to know Ted stands for. For a man who doles out words of wisdom like he has extra to spare, the man make it known he hates therapy and therefore struggles to adjust to the new no-nonsense sports psychologist Dr. Sharon Fieldstone (Sarah Niles). Niles it the perfect foil to Sudiekis’ Ted, testing every button he has and points out Ted’s use of positivity to dodge some of life’s more complicated issues. However the show doesn’t use the character to her fullest potential, dropping her off for a few episodes to focus on other storylines.

Which brings us to the next issue: three main conflict hung over last season’s head. 1. Rebecca using Ted to sabotage the team, 2. The threat of relagation, 3. The entire teams resistance to the Lasso. This season doesn’t have a clear overarching thread to connect subplots together. Instead smaller arch pop in and out depending on the episode, making the season less predictable and coherent. Ted Lasso is still as funny as last year and most of the characters are just as loveable as ever, but its hard not to feel as though its structure is all over the place.

This season belongs to Brett Goldstein’s Roy Kent. The grumpy player who was headed towards retirement at the end of last season finds himself immersed in that decision in season two. While still navigating his relationship with the team’s PR head Keeley (Juno Temple), he struggles to find his place off the soccer field. With every grunt and “fuck you,” Goldstein once again finds a way to pump heart into every scene he’s in. While Ted may have been the soul of last season, it’s Goldstein’s Roy who gets the best lines and gives the best advice.

The second album, book, or season is always the hardest for an artist. Though Ted Lasso doesn’t quite reach the heights it did last year when everyone was in quarantine, it does a lot right. Its humor hits right where you would want it, Ted is more three-dimensional this season, its supporting cast is given a chance to shine in all the right ways, and it packs the same emotional punch you want from Ted Lasso. If its first season was the surprising underdog of last year’s bleak TV landscape, expect this season to still medal, just not come in first.