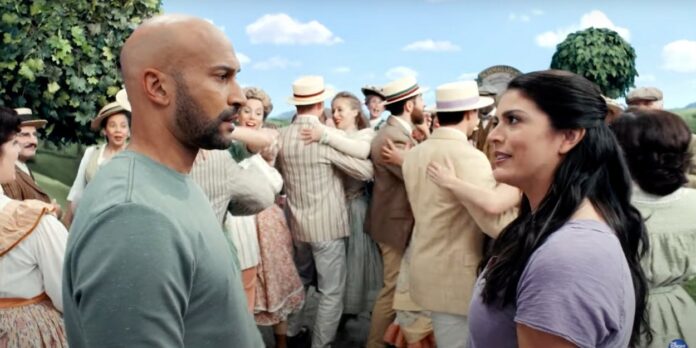 In the new Apple TV+ musical comedy, Schmigadoon!, Cecily Strong and Keegan-Michael Key are at a crossroads in their relationship – literally. Stuck in a rut and overly comfortable with each other, Strong’s Melissa suggests she and her boyfriend Josh (Key) take a week-long hiking trip to try and shake things up. In the middle of a fight over their future in the woods, in the pouring rain of course, the couple finds a small little town straight out of a movie – a movie musical that it is. Produced by Lorne Michaels and co-starring Fred Armisen, Dove Cameron, Jaime Camil, Kristin Chenoweth, Alan Cumming, Ariana DeBose, Ann, Harada, and Aaron Tveit, this comedy series leans into its classic movie source material rather than give us something new to sing.

Within the first opening number, Schmigadoon! references an enormous amount of classic movie musicals, the most obvious being Brigadoon (whose plot is very similar to this show), Carousel, Sound of Music, Guys and Dolls, Music Man, Oklahoma, and pretty much any other song and dance film of the 1950s and ’60s. Kitschy from the get-go, this small singing town is not Josh’s jam at all and wants to leave the celibate and love-obsessed townsfolk behind. However, the couple finds themselves unable to leave until, as a leprechaun played by Martin Short tells them, they find true love.

Forced apart, the couple must look for their true love amongst your typical musical archetypes, foppish town leaders, demure school teachers, religious zealots, questionably young love interests, and the “bad boy/carnie who isn’t really that bad by today’s standards.” The casting is spot on (which we won’t reveal to keep some of the magic) and Strong and Key’s performances set a strong tone for the rest of the players.

If you have seen a musical sketch on SNL in the last eight years, chances are Strong was either behind it or in it. Clearly, in her element, her Melissa works a bit better than Key’s Josh, pointing out all the troupes and the differences between modern-day PC culture and the dated one is currently stuck in. Key, who was last in The Prom, plays a curmudgeon similar to his past roles, feels one-note.

Obviously, the set and production design is impeccable. The music and lyrics are smart and clever and clearly know what they are referencing. Schmigadoon! does have a few problems working against it. Because its cast is so expansive, supporting characters often fall by the wayside by the final episode. Armisen, who plays a closeted pastor dressed like a Catholic priest and is married to the town’s prude and religion fanatic (Chenoweth), is severely underused.

The show also lacks the biting humor you’d expect from something with Lorne Michaels name on it. Rather than being a sharp and humorous take that slightly criticizes the genre, Schmigadoon! ends up falling into its trappings. Instead of parody, we often get a straight-up cutesy musical. Creators Ken Daurio and Cinco Paul, who write or co-write a majority of the episodes, are known for writing some of the most famous animated kids movies of the last fifteen years including Dr. Seuss’ Horton Hears a Who, The Despicable Me Franchise, Dr. Seuss’ The Lorax, and The Secret Life of Pets. Even with their work history, their co-writers known for more edgy projects, like Bowen Yang (Saturday Night Live), Julie Klausner (Difficult People, Billy on the Street), Kate Gertsen (The Good Place), Allison Silverman (Russian Doll, Portlandia, Unbreakable Kimmy Schmidt) fail to bring any real spice to the sugar fest that is a schmaltzy movie musical.

There is a Sound of Music “Do Re Mi” style number that breaks down, in detail, the female anatomy in terms of conception, easily becoming the best part of the series. But overall Schmigadoon lacks the biting humor you’d expect from Lorne Michaels/SNL affiliated musical comedy. Overly sentimental and not adding to the genre, its a song and dance we’ve seen before.

Schmigadoon! airs every Friday on Apple TV+. Watch the trailer below.

‘House Of Spoils’: Ariana DeBose To Lead Amazon/Blumhouse Thriller From ‘Blow The Man Down’ Duo