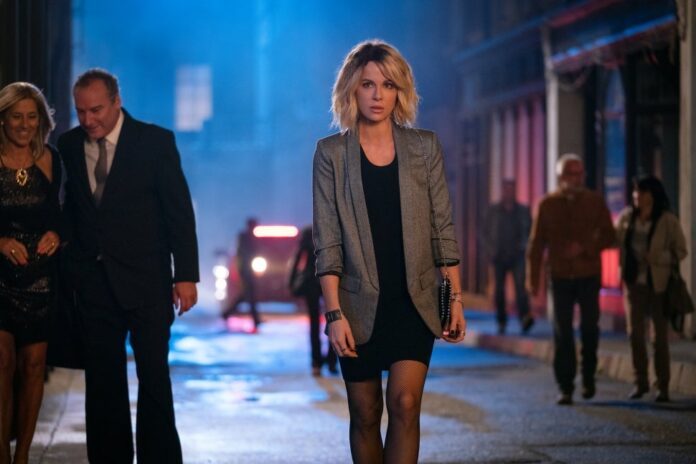 Long past the skin-tight leather and icy skin of a vampire in the long-running Underworld franchise, Kate Beckinsale finally returns to action with Jolt, and it’s good to have her back. the character she plays, Lindy, might as well be a comic book superhero. She even has the perfectly silly origin story, having been born with a neurological problem, intermittent explosive disorder, that gives her incredible strength…oh, and an uncontrollable rage that she uses against everybody, especially those who get on her nerves. It makes building lasting relationships with men virtually impossible, but when she finally finds the right one and he ends up dead, look out.

The difference between Jolt and Crank: High Voltage is willingness to push the limits, and the screenplay by Scott Wascha never goes far enough. There’s some much-needed lunacy as Lindy images doing the absolute worst to the people who piss her off, but the best is saved for those she actually hurts. In most cases these are toxic dudes in awe of her beauty and unaware she’s a killing machine; sometimes it’s a particularly snooty waitress who makes the mistake of getting cornered in the women’s restroom.

Jai Courtney plays Justin, the man of Lindy’s dreams mainly because he’s charming and doesn’t run away from her violent urges. When he turns up dead after a night of carnal bliss, Lindy gets very angry. You wouldn’t like her when she’s angry. Bobby Cannavale and Laverne Cox play the cops hot on Lindy’s trail, wondering who this woman is leaving so much death and destruction in her wake. Cannavale’s character is sweet on her; Cox’s is considerably less so.

Jolt holds a lot of promise of balls-out insanity, but the screenplay never goes far enough. If you’re going to make a film as wildly over-the-top as this you have to raise the bar constantly, and too long it settles into a familiar groove. Beckinsale is still as credible as ever at beating people up, and she makes the whole thing far better than it has any right to be. Susan Sarandon shows up and basically has a cup of coffee in a role designed to set up a Marvel-esque franchise, but if Jolt doesn’t electrify as much as it could why should we expect the prospect of a sequel to get us charged up?