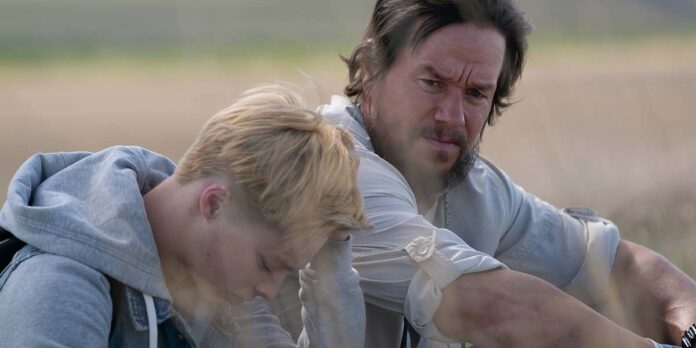 We could all do with more compassion being put out into the world. Especially on the issue of bullying, and how it relates to homophobia, it seems like we are again in dangerously short supply. Reinaldo Marcus Green’s Joe Bell (originally titled Good Joe Bell) is a sensitive, moving drama with its heart in the right place, and while flawed in execution and occasionally unfocused thematically, it earns an emotional catharsis through the strength of its lead performances which do the real-life story justice.

“I mean, everybody’s against bullying, aren’t they?”, says well-meaning father Joe Bell (Mark Wahlberg) at one point to his wife Lola (Connie Britton) while preparing to make a cross-country walk in honor of his son, Jadin (Reid Miller, a true find). She quickly notes that he wouldn’t need to be making the walk to begin with if that were the case. What goes unsaid, because this takes place in 2013, is that years would follow with America championing and even voting into the presidency a bully.

But Joe’s question suggests his naivete on the reality of hate in this country. The film actually begins with Joe well into his journey. A strong, blue-collar family man, Joe can’t quite understand how his son Reid is gay. He isn’t ready for that. His response when Reid comes out, admitting that he is being bullied in school, is to tell his son to “kick the asses” of his tormentors. Joe means well, and tries his best to show support in his own way, but it’s clear that he is lost in how to give Jadin what he really needs.

During the walk from Oregon to New York, Joe begins to show the kindness and warmth that was so hard for him before.  With an exuberant Jadin by his side, Joe lets his guard down and the two find common bonds as a father and son, even getting down to some Lady Gaga in the process. It all sounds very formulaic, and Green, along with reunited Brokeback Mountain writers Diana Ossana and Larry McMurtry, seem to recognize that and play with our expectations. Although, an emotionally charged “twist”, revealed at a gay bar by an inquisitive Dolly Parton crossdresser, is telegraphed from about ten miles away. It nonetheless serves as the catalyst for Joe Bell to venture into uncharted territory for this otherwise familiar story of guilt and redemption.

While our inclination is to want to follow Jadin’s heartbreaking story of the physical and online torment he suffered for being gay in a small, conservative town, this is about Joe and the evolution he went through. Joe is often a very angry man, and he tends to lash out at the people around him, especially those he loves most. He’s not an easy guy to like, in these scenes that take place prior to his journey. The screenplay struggles to make clear where the anger comes from, and once Joe gets beyond it, to clarify why he feels this walk needs to take place. Is it to make amends with Jadin? To try to make some good out of the tragedy that befell his son? Or is it, as suggested at one point, for the adoration and publicity that comes with such a newsworthy undertaking?

Joe Bell is a real tearjerker, and can be emotionally manipulative in the way it gets its messages across. But it also doesn’t paint Jadin, the real-life kid whose death in 2013 became the subject of national headlines, as a victim. Reid Miller breathes such tremendous life and energy into the film, refusing to paint Jadin as anything less than a strong, heroic kid fully aware of himself. Miller and Wahlberg share some great scenes together, with the latter given a rare chance to show some vulnerability. Wahlberg isn’t always comfortable doing so, and you can almost see it, but Miller draws it out of him and the two work together extremely well. Miller shares many great moments with Britton, as well, and even young actor Maxwell Jenkins who plays Jadin’s younger brother.

Green, whose previous film Monsters and Men was a standout at Sundance, excels in capturing the smaller, character moments. Joe Bell is probably going to be more impactful the less you know of Joe and Jadin Bell’s story, especially in the bittersweet conclusion which bucks our Hollywood expectations of a purely happy conclusion. Life doesn’t work that way, there’s always sadness mingled in with the good, and sometimes an epiphany comes with a heavy price.