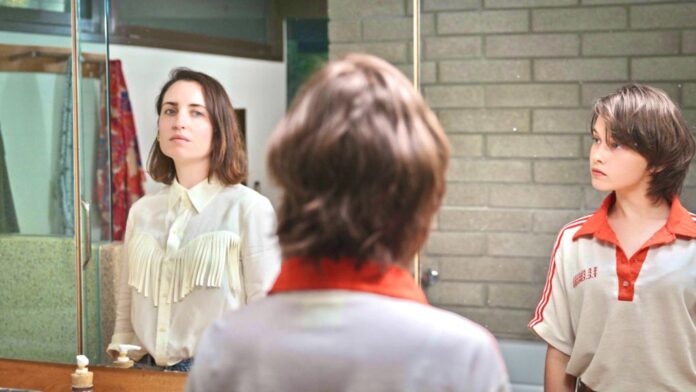 *NOTE: This review was originally posted as part of our 2021 Sundance Film Festival coverage. How It Ends is available now in select theaters and digitally.*

The calmest end-of-the-world catastrophe film you’re likely to find, Zoe Lister-Jones and Daryl Wein’s How it Ends follows in the same tragi-funny footsteps of Seeking a Friend for the End of the World. The long and short? It’s never too late for self-improvement and closure, even on the streets of Los Angeles on the final day before an asteroid is set to destroy the planet. Featuring a star-studded cast that Lister-Jones and Wein emptied the Rolodex to lure out of quarantine, the film takes some time to get going and meanders a bit, but proves an easy watch.

Lister-Jones co-directs, co-writes, and stars as Liza, who plans to spend her final night on Earth getting high all by her lonesome. She’s talked out of this notion by who we think is a roommate or kid sister (Cailee Spaeny), but turns out to be her younger self. She’s “metaphysical”, as we’re constantly reminded, and she’s not only full of energy but very opinionated. One of the film’s pleasures is the way Lister-Jones and Spaeny come to move and act more like one another as the story goes along.

On this final day, Liza’s younger self is pushing her out into the world to wrap up some loose ends. So this won’t be a time of panic, and actually everybody seems to have just moved into the “acceptance” phase of this catastrophe, it will be a time of reconciliation with her inattentive father (Bradley Whitford), her wayward mother (Helen Hunt), an old friend she left behind (Olivia Wilde), and possibly the guy (Logan Marshall-Green) she loved who got away from her. She’ll have to hoof it through the city streets because, even at a time like this, car theft is still a thing.

While watching How it Ends I kept thinking back to the insane chaos of the recent disaster film, Greenland. This is basically its polar opposite. You’d be hard-pressed to know anything was happening at all. The L.A. chill is in full effect. A guy buys up the weed dispensery and is more than happy to share; a teacher performs her stand-up routine on the street corner, while a break-dancer decides today’s a good day to rock the old school boom box. There’s a certain amount of liberal privilege at play here, for sure, and Liza is definitely a part of that. Her concerns are minor, her hang-ups about not being able to “accept love” sound like something her therapist beat into her head.

The reason we eventually give a shit is the dynamic between Lister-Jones and Spaeny, which is playful more than it is painful, although there is plenty of the latter. The two actresses couldn’t be more different. I expect the quiet, somewhat judgemental humor of Lister-Jones’ excellent Sundance comedy Band Aid, while Spaeny is just boundless energy. The contrast is key, and says a lot about the person Liza has become as an adult.

Although it clocks in at about 90-minutes, there’s plenty of room for trimming some of the excess cameos that go nowhere. Indulgences are plentiful, such as a sudden duet with Sharon Van Etten that stretches about a thousand notes too long. In L.A. where nobody walks anywhere, Liza’s moseying from place-to-place, occasionally bumping into celebrities (It’s Always Sunny cast members are plentiful), can get a little tiresome.

Shot during the pandemic but not directly addressing our current global nightmare, How It Ends is a better cinematic use of this moment than bigger productions such as Locked Down or Songbird. At the very least, we get to see people communicate directly, face-to-face, rather than face the destruction over a Zoom meeting.