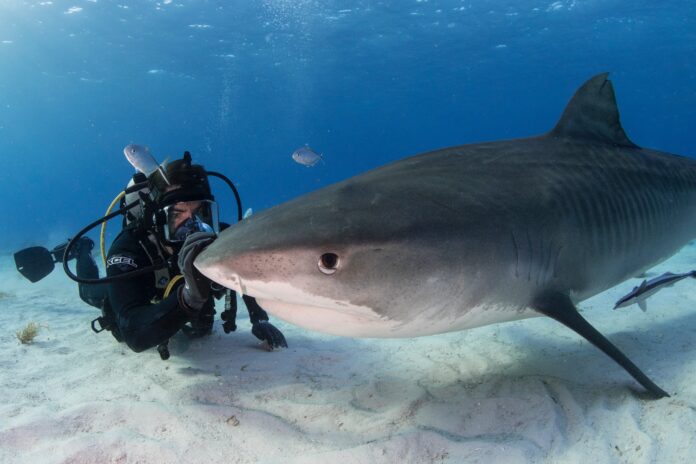 Fin is a documentary film revealing the horrific magnitude of inhumane and excessive practices used by the global fishing industry of sharks throughout the world. Horror filmmaker Eli Roth (Cabin Fever, Hostel, Death Wish) is equally fearful yet intrigued by the shark world. The ultimate goal is to uncover and scare viewers into social action, inspiring them to save the shark species and populations that are rapidly depleting.

Roth wrote, directed, and executive produced this documentary with the assistance of a professional group of scientists, researchers, and activists. They meet around the globe to unveil the brutal truth behind the deaths (accounted for) of over 100 million sharks per year. Hoping to expose the criminal enterprise while investigating the detrimental impact that’s leading to the extinction of these majestically misunderstood creatures.

Fin will stream globally on Discovery+ as part of the company’s much celebrated, “Shark Week”. Photography work is provided by Michael Muller. Environmental organizations such as Oceana, Sea Shepherd, and WildAid express major support and also contribute to the making of this film. Oscar® winner Leonardo DiCaprio executive produces as well as, actor, producer and shark activist Nina Dobrev and President of Lionsgate Nonfiction Television, Pilgrim CEO, and Chair Craig Piligian.

Eli Roth visits places that are highly affected by shark fishing and how it impacts their location and economy. He travels to Mexico where he meets with Regina Domingo. Regina is a dive instructor, sailor, conservationist, producer, photojournalist, campaigner, and passionate researcher behind the documentary Game Over Fishing. She and Roth join local fishermen on a shark hunt with small boats, fishing rods, and a metal bat used to stun or rather, kill the sharks. Roth travels to Hong Kong, meeting with Gary Stokes of Sea Shepherd Asia. He informs Roth of the hard truth of how Hong Kong is the shark capital of the world. Stokes shows how fins are collected, dried and sold before it even reaches the stomachs of buyers.  Believe you me, it’s fucking gross!

California (Malibu), Liberia, and The Bahamas are other major areas traveled by Roth. He speaks with Asian Food Blogger, Daniel Chung. He takes Roth into the kitchen to see and taste the infamous soup. A soup favored by one guy, an emperor. Two hotels, later in a rival marketing race, claimed that one could eat just like the emperor. The desire and demand for shark fin soup soared simply to feel like royalty. Hotels catered to elite wedding parties where the fin soup was regarded a luxurious delicacy. Chung, being of the younger generation, called the practice passe.

In his journey, Roth also speaks with several researchers and activists including biologist Boris Worm and campaign manager for WildAid, Alex Hofford. WildAid released a commercial in 2013 publicizing the morbidity entailed for that ridiculously expensive bowl of soup. I vividly remember that commercial and even thought then that I hope some good would come from it. Shark “Finning” was banned but not without further repercussions for the shark. An unexpected backfire that was not intended to happen.

Roth’s documentary, Fin has a rocky start. He’s in Liberia boarding a well known shark hunting ship with National Guard and security people. At first, it’s assumed that the purpose of the search pertains to illegal shark fishing. However, the real reason comes to light much later in the film. Camera shots fumble around in the beginning that had me wondering what the hell was going on. His timeline eventually settles down and is steadily fluent for the remainder of the film. The background music sticks to simple melodies feeding the loom to catastrophic feel of the data and experiences provided. Roth even includes ASMR type sound effects that are more reminiscent of type-B horror films. The intent is to accentuate the darkness of the problematic ways of how shark food and products are used. Although effective, it did come across a bit cheesy.

Shark Week is celebrated by several networks and watched by millions of viewers all over the world.  Shark Week originally aired July 17th, 1988 on the Discovery Channel. Think about it. We have been educated and have grown to love sharks for over 30 years. For a world that fears yet, idolizes such a beloved creature..how the hell did we ever get to the point that the shark species and their populations could be completely wiped out less than 20 years from now?! Fin is the exact documentary that needs to be seen! Eli Roth and the other people involved provide detailed information unveiling the threats and dangers of the depleting ocean life. He adds ways that viewers can contribute to prevent further destruction and protect the shark world.

Congress is set to vote on a ban that would make it illegal to sell or buy shark fins in the U.S. If people do not voice their concern, sharks may be lost forever. Sharks have amazingly survived 5 mass extinctions. Roth’s documentary conveys that at the current rate, sharks will not survive a 6th extinction caused by humans. If you find the time to watch Shark week because you are intrigued, love sharks, or whatever your reason may be, I recommend watching Fin to truly understand just how important they really are to the planet.