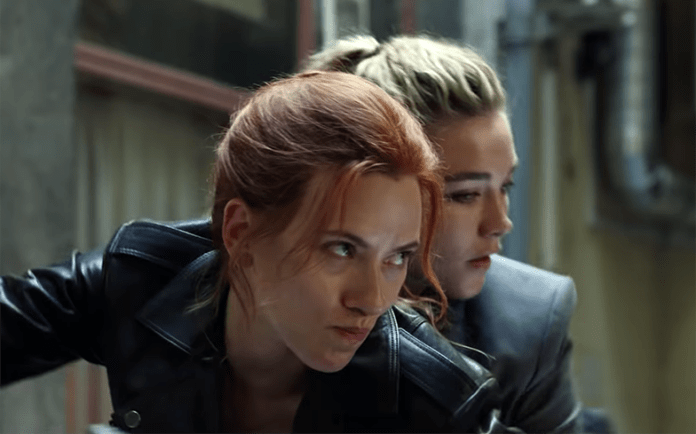 Fans have been asking for a solo Black Widow movie for years, and Marvel has paid lip service to it for much of that time. The character has come a long way from her cheesecake debut in Iron Man 2, with Scarlett Johansson making the most of being a background character to the flashier Avengers. But now that the film is here, coming on the heels of her heroic sacrifice in Avengers: Endgame, Black Widow delves into Natasha Romanoff’s past, the “red in her ledger’, in an action-packed thrill ride that provides the character depth that we’ve become accustomed to in the Disney+ shows. The wait was definitely worth it.

Given what we know of Natasha’s fate, Black Widow is a prequel set in a very specific time in the MCU, during the gap between Captain America: Civil War and Infinity War. The Avengers have split up, and with her superhero family gone, Natasha gets pulled into a deadly plot involving the only other family she’s ever known. The film actually kicks off in the 1980s, with a young Natasha living in a middle-class Ohio suburb with her young sister Yelena (later played by Florence Pugh), father Alexei (David Harbour), and mother Melina. All appearances to the contrary, this family unit is neither a family or a unit. They’re Russian spies on a mission, and with that completed and their cover blown, it’s time to escape to the Motherland. Uprooted from their stable home lives, the girls are thrown into a harrowing chase with SHIELD right on their trail.

While the opening montage, set to an annoyingly slowed-down rendition of Nirvana’s “Smells Like Teen Spirit” is exciting, what it also does is introduce a human trafficking component into the MCU for the first time. We see glimpses of the Black Widow program and the infamous “Red Room”, run by Russian big-wig Drekov (Ray Winstone) who takes young girls literally off the street and indoctrinates them to become assasins. Natasha and Yelena are thrown into this fire, as well, to be used up as assets for the government. Not only are their childhoods taken away, but as we learn later, any hope of creating a real family of their own.

In the present, Natasha is on the run from SHIELD yet again, only this time due to the Sokovia Accords. But going off the grid only somehow gets her entangled with now grown-up sis Yelena, who has been freed from the chemically-induced brainwashing of the Red Room and seeks to free the other Widows. She can’t do it without her big sister, and ultimately her father, the former super-soldier Red Guardian, and mother who is a former Widow herself.

Black Widow is an unstable mix of twisted family drama and big superhero action, with the latter closer in tone to The Falcon and the Winter Soldier, or even Mission: Impossible. It’s a tough combo for writer Jac Schaeffer and director Cate Shortland to nail, and sometimes one can get lost in the other. But the interactions between this makeshift family are priceless, and explore the strangeness that keeps them bound together. They were basically living one giant lie, and yet they need to believe what they went through together was real, because without it they’ve got nothing.

And of course, they bicker like any real family would. Natasha and Yelana have sibling and professional rivalry to literally fight over. They know exactly how to punch the other’s buttons, too. A great running gag has Yelena mocking Natasha for her sexy superhero poses, which the younger sis both mocks and emulates.  Alexei, a great bear of a Russian patriot, clings to the notion that he and Captain America are contemporaries. Melina has her own complications, juggling her maternal instincts with a desire to serve the country.

It can look at times like Natasha gets lost in her own movie. Her redemptive arc, which finally tells us about that thing she went through in Budapest (something hinted at in previous movies) is distinct but is sidetracked often by the need to highlight Yelena, who will conceivably be sticking around for a while. There’s also a very heavy theme about female autonomy, and fighting back against powerful, toxic men who seek to control women. Drekov is the closest thing the MCU has ever had to a mustache-twirling bad guy; he’s purely grotesque in his motivations, and it makes him a little bit bland even with an actor like Winstone playing him.

In what is likely to be her final Marvel movie, Johansson slips easily into the role she’s played for more than a decade. There’s more humor for her to chew on, though, trading back-and-forth with Pugh whose comic timing is impeccable. What’s great about Yelena is she’s similar to Natasha but has her own unique personality. She’s cynical about the world, ambivolent towards the Avengers, and yet eager to live a life finally able to make her own decisions. The real scene-stealer is Harbour, however, who as Red Guardian mostly offers comic relief as the out-of-shape former hero. But there’s depth to him, as well, having been left behind by the government he fought so valiantly for. He, too, must decide what the value of family is to him.

The chief physical threat comes in the form of Taskmaster, who I’ll admit is one of my favorite characters in the Marvel comics. A soldier who can copy the fighting techniques of any opponent, Taskmaster is more of a mysterious, cold adversary here but looks badass when firing arrows like Hawkeye, hurling a shield like Captain America, or fighting with finesse similar to Natasha. Part of me wishes they had stuck with a more traditional approach to the character, rather than changing Taskmaster to fit with the overall theme. I also quite liked The Handmaid Tale‘s O-T Fagbenle as Rick Mason, a charming private contractor whose business relationship with Natasha edges pretty close to friendship.

Of course, this being a Marvel movie, all of that character-building stuff comes crashing down in the final act, along with buildings, helicopters, a super secret spy base, etc. Shortland’s taut direction in previous films Berlin Syndrome and Lore inform her approach here, and fans of the acclaimed director will be pleased she hasn’t been chewed up by the Marvel machine. Fights are mostly hand-to-hand and realistically brutal similar to Atomic Blonde, with the environment playing a vital role in every battle. An early close-quarters scrap between Yelena and Natasha, in which they throw insults and fists in equal measure, is a real highlight.

Black Widow leaves a lot left on the table, and can’t help feeling like its purpose is to set up the next new thing. And you know what? I’m okay with that when the next thing has so much potential for awesomeness. Some might argue that Johansson’s swan song should have been more of a tribute to Natasha, but what better way to show how meaningful she was than to see her impact on others?

Black Widow is available in theaters and Disney+ Premier Access on July 9th!