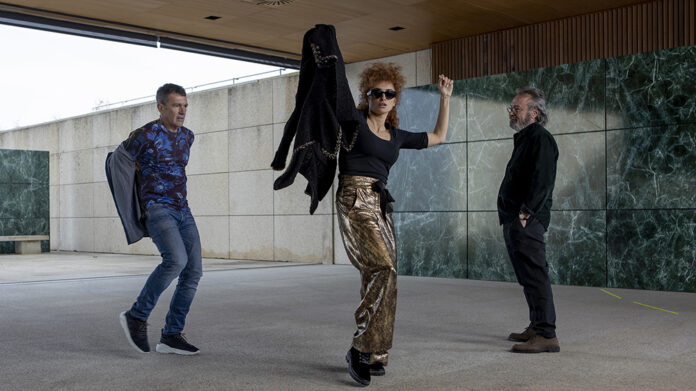 Hard to believe that Antonio Banderas and Penelope Cruz, arguably the two biggest stars in Spanish cinema and Pedro Almodovar favorites, have only one movie together. That film was the (atrocious) I’m So Excited, and it was for all of about 90-seconds. Well that changes now with the meta-comedy Official Competition, which is likely to be an official selection at the Venice Film Festival. Hey how ’bout that?

Directed by Mariano Cohn and Gastón Duprat who also co-wrote with Andrés Duprat, the film finds Banderas and Cruz alongside Argentinian legend Oscar Martinez. The story follows a billionaire who hires a renowned filmmaker, a heartthrob actor, and a radical thespian. Surprise surprise, none of it goes very well based on the footage seen in this new trailer.

Official Competition doesn’t have a release date yet, but considering this is the first time Banderas and Cruz will have a whole movie together it’s a pretty big deal. Expect it to be huge overseas and, eventually, right here.

In search of significance and social prestige, a billionaire businessman decides to make a film to leave his mark. To do so, he hires the best: a stellar team formed by famous filmmaker Lola Cuevas (Penélope Cruz) and two renowned actors, both enormously talented, but with even bigger egos: the Hollywood actor Félix Rivero (Antonio Banderas) and radical theater thespian Iván Torres (Oscar Martínez). Both legends, but not exactly the best of friends. Through a series of increasingly eccentric challenges set by Lola, Felix and Iván must face not only each other, but also their own legacies.