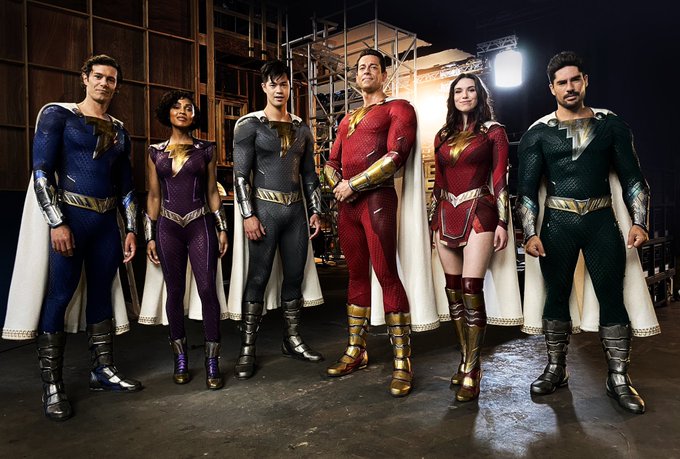 To be honest, I haven’t paid a ton of attention to Shazam: Fury of the Gods as it has gone into production. The casting is what’s caught my eye, mostly, with Helen Mirren and Lucy Liu joining the cast as villainous siblings Hespera and Kalypso, and Rachel Zegler in a mysterious key role. But we haven’t heard much about the rest of the Marvel Family, but good news as all of them will be returning and director David F. Sandberg has gathered them all together for a first look.

Don’t know how long we can keep the new suits from leaking so here’s a pic I took the other day pic.twitter.com/41wStJ6oe2

Sandberg confirmed that Fulton now plays both versions of Mary, the teen and the mature. Michelle Borth played the adult Mary in the first movie.

Who we don’t see are Rachel Zegler, who is expected to be a villain, as well, plus stars Asher Angel and Jack Dylan Grazer.

Zachary Levi Is In The Dark In New ‘Shazam: Fury Of The Gods’ Teaser

‘Shazam 2’ Won’t Include Henry Cavill As Superman, After All