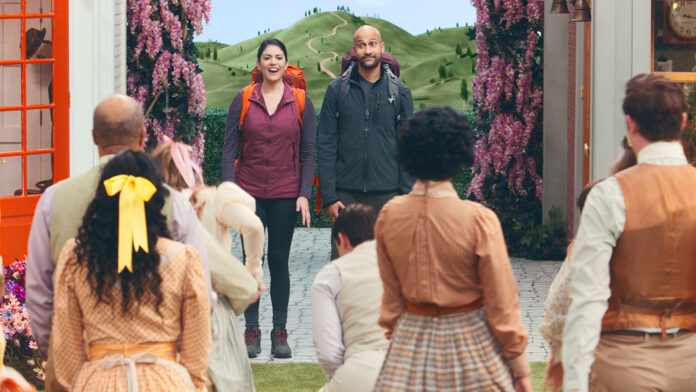 A lot of couples reevaluated their relationships during quarantine – just not set to music. In the trailer for the new Apple TV+ show Schmigadoon! Cecily Strong (Saturday Night Live) and Keegan-Michael Key (Key & Peele, The Prom) must work out their relationship issues in front of a cast of musical characters.

“Schmigadoon!,” a parody of iconic Golden Age musicals, stars Strong and Key as a couple on a backpacking trip designed to reinvigorate their relationship who discover a magical town living in a 1940s musical. They then learn that they can’t leave until they find “true love.”

The trailer alone references Oklahoma, Carousel, South Pacific, and West Side Story, not to mention the title is a play on Brigadoon, a musical about a mystical town in Scotland that is found by two American men.

Most of the supporting cast have either been on Broadway or are known for their singing ability. Strong routinely sings on SNL and appears in musical sketches a lot on the show. Key sang his heart out as the principal in last years The Prom (which also starred the above mentioned Ariana DeBose as his student but we won’t talk about that).

If a classic yet zany musical with a modern twist is your thing, check out Schmigadoon! on Apple TV+ July 16.