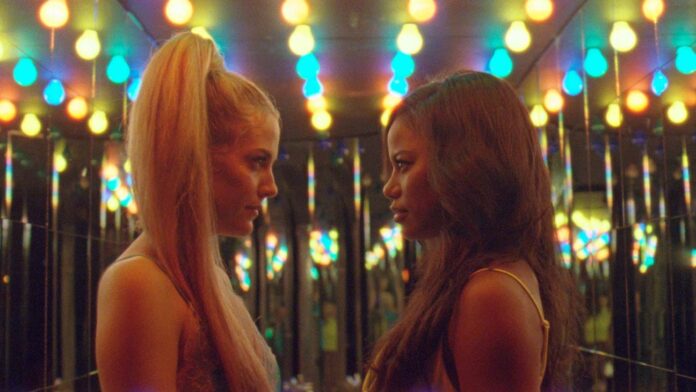 Strap in and get ready for one of the wildest experiences of the year. Janicza Bravo’s Zola had Sundance buzzing earlier this year, and I always regretted not experiencing it for myself. Because now that I have, “experience” is the right word for it. Inspired by A’Ziah “Zola” King’s epic Twitter thread from 2015, the film takes you on a nutty road trip through the seedy side of Tampa. Social media plays a major role, as it should, both stylistically and in capturing the free-for-all nature of this journey where seemingly anything can be said, anything can happen, and almost always does.

Ma Rainey breakout Taylour Paige plays King, a server who has an ill-fated encounter with Stefani (Riley Keough) at the restaurant she works at. Both women instantly bond; straight-up, there’s a certain hoodrat ratchedness to them both, and they sense it in one another. They’re also the types to go out and get what they feel they deserve, and so when Stefani invites Zola on a road trip to Floria where they’ll dance at some strip clubs, Zola jumps at the chance. She’s only known Stefani for a day, but so what? It looks like fun and there’s money to be made.

Along for the ride are Stefani’s idiot boyfriend/cuck Derek (Nicholas Braun) and, her supposed roommate X (Colman Domingo) who is…well, let’s call him unpredictable, but even that seems like too cautious of a word. The man is borderline psychopathic, with an accent that changes like the wind and a demeanor to match. It isn’t long before Zola realizes she’s been duped into some crazy shit she wasn’t prepared for. Shit goes south quick when Stefani starts selling her ass out to random dudes to make every money, with X clearly as her strongarm pimp. He also wants Zola to get in on the action, creating an unbearable tension because X is not someone to say “no” to. Making matters worse, Derek is none too happy about his girl trickin’ around.

And that ain’t even the half of it.

Zola falls squarely between two other favorite Florida films of mine; Harmony Korine’s manic, neon-lit Spring Breakers and Sean Baker’s The Florida Project. There’s unhinged behavior and hilarious sight gags (a random midget chillin’ by the pool after a denouement moment had me dying) abound, but Bravo is quick to tackle Internet culture, fame, sex, female friendship, and the plight of the underclass. What is it about our current climate that makes these people do what they’re doing? Everything revolves around Zola and Stefani’s relationship, which is constantly reorienting itself, tilting to give one power and taking it away from the other.

At every turn, Zola is forced to consider how far she’ll go to survive this shockingly dangerous predicament she’s in. There’s also how much of herself she’s willing to sacrifice, because it would be easy to just let herself go and become part of the insanity. X would certainly make it worth her while, and Stefani makes no secret that she’s looking for a sister to ride this shit out with. But is sisterhood worth compromising yourself over?

As someone who only found the initial Twitter beef after it was long over, I was curious how Bravo could capture its energy, Zola’s chaotic prose which, in 140 characters per, is Shakespearean and stripper slang rolled into one. Bravo does it with an excess of flourish, such as pinging us with the Tweet beep every so often like a reminder where this all sprang from. Characters read their tweets verbatim like that’s just how things are supposed to work, and who knows? In a few years, we may all be adding “lol” to our vocabulary. But at no point does it ever feel like a cheap gimmick.

The cast is great all around, with Paige really shining as Zola. She’s a fierce character, someone who is at turns brilliant and gullible, but always looking out for herself and observant of these weirdos around her. Keough is absolutely perfect casting, reminding of her bikini-clad entrepreneur from American Honey with a much darker, satirical twist. And props to Colman Domingo for taking a character that, not unlike James Franco’s Alien (Franco was initially attached to this film in early stages), is like a cartoon come-to-life and making him feel real. That’s what’s so scary about X, is that he’s a real person out there in the world somewhere, being cordial one minute then threatening in African to kill you the next.

Zola can’t keep up the frantic pace forever. Things wind down towards the end, and there doesn’t seem to have been any lessons for these people to have learned. But do you go to Twitter to get educated or entertained? Exactly, and Bravo knows that, too, delivering the cinematic equivalent of a tweet storm.