In West Texas, football is life and Abilene is no exception. In 2008 the Abilene Eagles were heavy championship favorites. Their season came to a crashing halt when they lost a heartbreaker in the first round of the playoffs. Under the Stadium Lights is the true story of the 2009 Eagles team. With so many prominent players graduating, the 2009 team was overlooked with championship aspirations being long gone. However, quarterback Ronnell Sims (Carter Redwood), his cousin running back Herschel Sims (Acoryé White) and linebacker Boo (Germain Arroyo) have a different idea in mind. After the team gets off to a quick start, they have a chance to make this vision a reality. The only thing standing in their way is rival Cedar Hill, a championship contender in their own right. 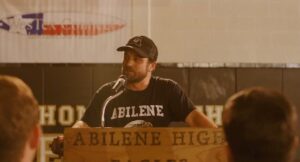 In addition to the comradery from their teammates, the players also have support from various adults in the community. Coach Warren (Glenn Morshower) tries to teach the players valuable lessons about hope and moving forward. Team chaplain/police officer/pastor Chad Mitchell (Milo Gibson – Mel’s son) is always there when anyone needs him and establishes an open culture within the team. Harold Christian (Laurence Fishburne) is the local BBQ restaurant owner that might be the Eagles number 1 fan. Football is an escape for most of the players. They have numerous familial hardships weighing on them, but the love and support of their teammates lifts them up. 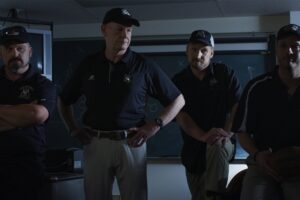 Under the Stadium Lights is written by John Collins and Hamid Torabpour based on the book Brother’s Keeper by Al Pickett and the aforementioned Chad Mitchell. The film is also the feature length debut for director Todd Randall. Randall tries to keep things fresh with little cinematic gimmicks popping up on screen and upbeat music. With Mitchell’s book being the source material for the film, it’s no surprise that he has a prominent role. Randall struggles with keeping focus throughout the film. At times the players and their stories take center stage before being dethroned by football, even without proper closure. Once the big game arrives, everything else goes out the window. After having spent a majority of the film on character development and attempting to have the audience care for these players, we are robbed of a fitting conclusion to their individual stories. 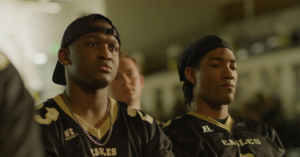 With a film being titled Under the Stadium Lights I expected more of it to actually take place under stadium lights. While there are multiple instances where old game film is provided, the audience has no context of what they are watching. Die hard Abilene fans may recognize plays and moments, but the rest of us aren’t so lucky. Under the Stadium Lights feels disjointed, hopping from one scene to another with no real continuity. This hurts the flow of the film and progression of the story. Under the Stadium Lights has the feel of a straight to television film. It lacks the excitement of sports movies that have come before it and true drama that pulls you in. Well before the final whistle blows, it is clear that Under the Stadium Lights is not worth a watch.