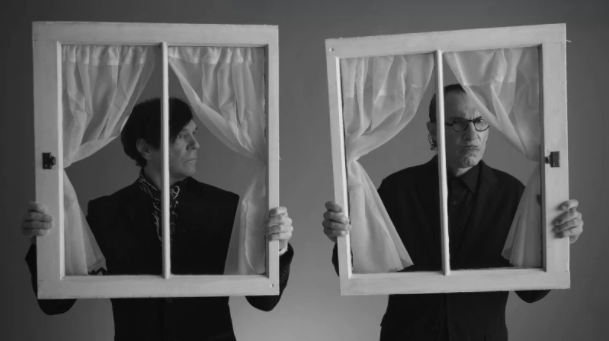 Director Edgar Wright (Shaun of the Dead and Scott Pilgrim vs. The World) makes his documentary debut with The Sparks Brothers about the musically talented and brother duo, Sparks. Ron and Russell Mael have been making music since the 1960s and still creatively rock on to this day. How can one rock band be successful, underrated, hugely influential (mostly throughout Europe), and criminally overlooked all at the same time?

Described in the film as the “bees” of the music industry, Sparks are your favorite band’s favorite band and labeled by their global fandom as “the best British band from America”. The Sparks Brothers features many people praising Sparks for their influence, including Beck, Flea, Neil Gaiman, Mike Myers, Patton Oswalt, Jane Wiedlin, and so many more. This documentary successfully peels back the layers to the wildly eccentric persona and respectable talent that each brother possesses.

The Sparks Brothers opens like how most documentary typically do; from the beginning. Ron and Russell describe their middle class upbringing in sunny California. Their father made beautiful paintings and mother supported and deeply encouraged the boys’ lifestyles. Overall, the Mael brothers were fortunate to have some seriously awesome parents. They provide a wide array of family photographs and video recordings, opening the door to the early life and influence that brought brothers, Sparks, to the world.

It was at their time at UCLA when the duo decided to really bring their love of music and performing in a band to fruition. Ron and Russell gained attention but not enough to peak a nationwide interest in the states. Their musical taste was largely influenced by British bands like the Beatles, The Who, and The Rolling Stones. With that being said, both thought they would have a better chance of gaining popularity by forming a band in the UK. They weren’t wrong.

The Sparks Brothers beautifully captures the journey experienced by the legendary pair and the amazing artists who’ve worked with and are inspired by them. At nearly 2 hours and twenty-one minutes, no detail is spared. A fascinating story that chronicles five decades, dozens of albums, and countless hurdles popping up while trying to survive in the music industry. Ron and Russell are recognized and respected for their lyrical genius and unique taste of french film-making, fashion, and use of stunning imagery that embodies their mystique ambiance. Wright does an excellent job of shining light on those specific qualities in his documentary.

These two gentlemen are always evolving themselves musically and their hard work, determination, and dedication to their craft. Their ability to “push the envelope” and fantastic attitude toward keeping their talent alive is phenomenal and gains new fans throughout each decade they’ve entertained to even now, including myself. It’s a long haul but totally worth every minute. The Sparks Brothers will educate and fully inspire you to want to be a fan. Definitely worth a watch!

The Sparks Brothers will be released in theaters June 18th.