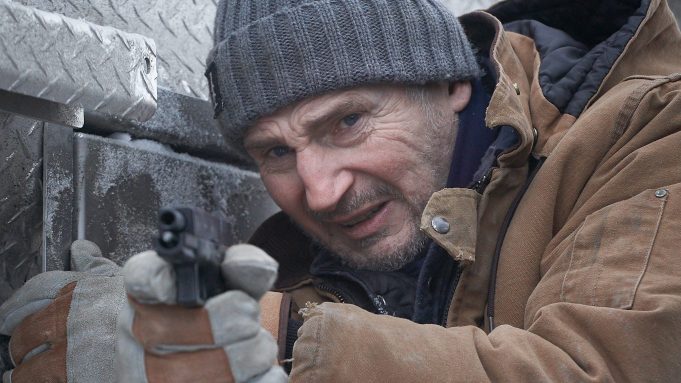 Over the years we’ve seen Liam Neeson beat people up on planes, in trains, in foreign lands, and even with lightsabers. When his character gets mad, watch the f**k out because he won’t be stopped. Now put Neeson behind the wheel of a massive big rig, give him a target and someone to hit, and watch out. The Ice Road is a Neeson action flick targeted at fans of the Ice Road Truckers reality show, taking one of the world’s most dangerous jobs and Hollywood-izing it into something that’s ridiculous and thrilling at the same time.

Because, y’know, it isn’t enough to have these giant trucks skidding around on the cm-thick ice of Lake Winnipeg. Nope, this is a Liam Neeson movie and he needs a more tangible enemy with a face you want to see punched. The blue collar thriller stars Neeson as Mike McCann, an ornery hauler who can’t keep a job due to caring for his PTSD-afflicted brother Gurty (Marcus Thomas). One look at Mike and you can tell his particular set of skills goes beyond the driver’s seat of an eighteen-wheeler.

When a diamond mine run by a couple of shady corporate suits explodes, trapping the miners deep inside with dwindling oxygen, Mike joins a ragtag bunch to deliver the needed equipment to save the day. Along the way, they face an endless supply of cracking ice, flimsy bridges, a raging snowstorm, and an avalanche of mistrust and deception. Laurence Fishburne has a cup of joe as veteran hauler Goldenrod, while Amber Midthunder is a scene-stealer as Tantoo, a rebellious Native American driver who is hired straight of jail and is so tiny you wonder if her feet can reach the pedals. But she’s got fire, a sense of humor, and knows her just as well as her male counterparts. She can also smell a rat, no, not Mike and Gurty’s pet rat riding in the middle seat, but corporate stooge Varnay played by Benjamin Walker. He’s there to keep tabs on the company’s investments,  and we know how those characters tend to fare in these movies. Anybody seen Aliens? Corporate malfeasance, anyone?

The Wages of Fear this ain’t. Writer/director Jonathan Hensleigh plays fast and loose with the rules of the road. He’s quick to give us the math on how these massive trucks can stay atop the melting ice; go too fast and you’ll sink, go too slow and you’ll sink. But any tension that might’ve created evaporates every time the action cuts away to the trapped miners, who rapidly, and implausibly, go Lord of the Flies on one another.

Hensleigh does make the most out of the big rig stunts, however, which are impressive given the limitations afforded by their size, speed, and the barren landscape. You have to set aside any hope for authenticity, however. The trucks don’t just fall into the frigid waters below. They frequently tip over, crash, payloads are lost, all of this recoverable without so much as a hint of trouble. Yeah, okay. The Ice Road doesn’t take itself too seriously and neither should you, dear viewer. When the film devolves into a low-speed chase between semi trucks over the frozen surface, it’s a laughable sight that only someone like Neeson can make work.

“Now I’m angry!”, Mike shouts, not because he’s nearly died a half dozen times already but because he got embarrassed. In that moment, we know somebody’s going to get dead real soon. It takes a slippery path to getting there, but The Ice Road at least delivers the goods Neeson fans want.

The Ice Road is available now on Netflix.