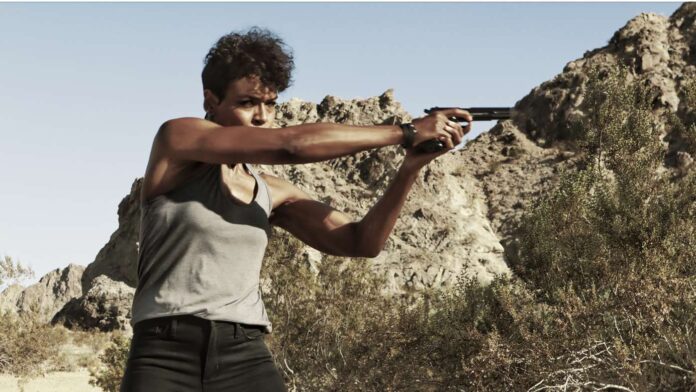 As the landscape for female action stars gets steadily more competitive, it’s always exciting to see a brand new face enter the picture. Gillian White, wife of fan-favorite actor Michael Jai White, gets her moment to shine in Take Back. White is by far the most impressive aspect of a thriller that starts off hot, then cools down to such a degree that it never quite recovers, despite the presence of a lethal Michael Jai and a scummy, leather-faced Mickey Rourke.

Gillian kicks ass in the role of Zara, a small-town lawyer with a deep, dark secret. She’s married to her sensitive husband and martial arts dojo partner Brian (Michael Jai White), who seems to have come to accept Zara’s troubled past. Their quiet life goes up in smoke when Zara becomes an instant celeb after beating down a criminal at a coffee shop. Turns out, the perp was part of a sex trafficking ring led by Patrick (Rourke), a murderous, chihuahua-stroking terror from Zara’s past.

It’s easy to see the potential in Gillian White as an action star. Her physicality and intensity matches that of her husband’s past peformances. Together, they’d make quite a lethal team and hopefully the movie comes around that allows them to do that. Take Back isn’t that film, however. The plot grinds to a halt right around the time when it should be heating up, mainly because of the slow teasing of Zara’s backstory, which we’ve long since figured out by then. Director Christian Sesna and screenwriter Zach Zerries use the real-world issue of sex trafficking as reason to be overly serious, contradicted by Rourke’s cartoonish villainy.

While it’s not often I comment on production values, the limited budget does the film no favors, resulting in a very condensed style of filmmaking that is a distraction. Take Back still manages to be somewhat entertaining as a fresh introduction to Gillian White as possible genre fixture, and if we’re lucky this film will just be a footnote in her career.

Take Back is available now in select theaters and VOD.