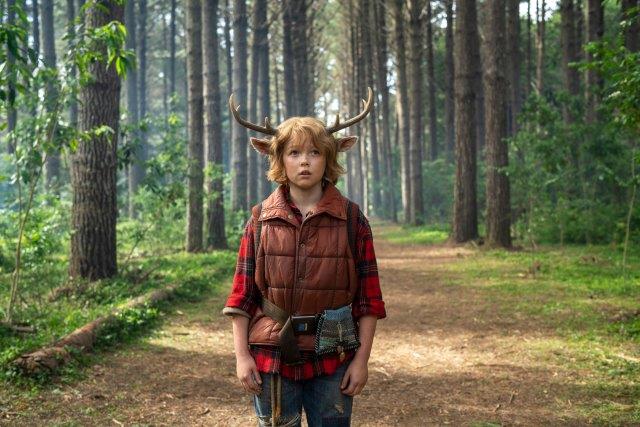 When making a TV show surrounding a pandemic in today’s climate, timing and precision is everything. We kind of like post-apocalyptic pandemic movies/shows (The Walking Dead shows, Contagion, and countless others), but we want it to be a little too far outside our reality. For example, last summer’s pandemic conspiracy thriller Utopia on Amazon proved to be a little too realistic: to the point that the show had to put a disclaimer in the beginning of each episode that it’s a work of fiction. But unfortunately, people weren’t too receptive to a TV show where a pandemic outbreak happens, and the vaccine is a huge global conspiracy to control the masses, now why wouldn’t we want to watch that (sarcasm)? Luckily for us, Netflix found the perfect way to give us an engaging post-apocalyptic thriller, but having an incredible story filled with adventure, charm, and hope in their adaptation of the DC Comic (well, their offprint division Vertigo) Sweet Tooth by comic writer Jeff Lemire.

The story of Sweet Tooth (with perfect narration at the beginning of each episode by James Brolin) begins 10 years after “The Great Crumble,” where a pandemic has pretty much transformed society as most apocalyptic movies/shows usually are. The pandemic also introduces “hybrids,” which are children born part human, part animal. It not clear or known if these hybrids are a result of the pandemic, or the cause of the pandemic. Naturally, this causes some parts of humanity to be distrustful of the hybrids, and a militant group called “The First Men” emerges with the purpose to hunt and kill all hybrid children they can find. It’s how we meet our hero Gus (Christian Convery) under his care of his “Pubba” (Will Forte) hiding out in a fenced-in wildlife park away from society. First off, Gus is adorable. His deer ears and antlers turn up the cute factor to the max. Pubba does his best to care for an inquisitive child who just wants to learn about what lies beyond Pubba’s self-imposed borders, as well as learn about his mother, who Pubba is very cryptic in revealing any information about.

Unfortunately, things happen that force the world to come to Gus’ home and soon enough he learns firsthand about how dangerous the world outside can be. Luckily for him, he also crosses paths with Jepperd (Nonso Anozie of Game of Thrones and Zoo fame), a large loner also wondering the landscape. After Jepperd helps Gus out (and gives him the nickname “Sweet Tooth” after his liking of candy after being introduced to it by the outside world), Gus becomes smitten and wants to hang with “The Big Man” (the nickname Gus gives him) as Gus learns his mother is living in Colorado and asks Jepperd to be his guide. Jepperd, with his own past, that Sweet Tooth slowly reveals wants nothing to do with the child, but knows he’d be dead within a day if he goes alone, becomes his reluctant guide as they trek across the country in search of Gus’ mother.

In addition to our core characters, Sweet Tooth introduces us to very compelling supporting characters. Dr. Singh (Adeel Akhtar) is a former MD who now just wants to live in peace and quiet while caring for his wife Rani (Aliza Vellani) who is infected with “The Sick” as he tries to secretly work on a cure for her in their private community (which also has their own dark little secrets). In addition to Dr. Singh’s adventures, we are also introduced to Aimee (Dania Ramirez), a young woman who lived a very ordinary life as a therapist prior to the pandemic, but in the aftermath has discovered herself and her true purpose in life, which is transformatively different than what it was prior to The Great Crumble. There’s even a great montage at the beginning of the episode that introduces her as she is vegging out on the couch during the stay-at-home order (ordering food delivery and watching TV) during the initial stages of the pandemic that’s all too familiar to our current reality. Slowly but surely, their stories become intertwined with Gus and Jepperd as the series progresses.

Speaking of Gus and Jepperd, they meet Bear (Stefania LaVie Owen) the leader of a small community that’s gone complete “Lord of the Flies” that is absent of adults, where the teens have adapted personas of animals, hunt, fight outsiders, and play video games. Although Bear and her community are not Hybrids, they are very protective of Hybrids. This leads Bear to be very standoffish with Jepperd as she feels he has ulterior motives with Gun. Slowly but surely, Bear joins Gus and Jepperd on their quest for Colorado.

At the same time, there’s a dark cloud over everything in Sweet Tooth. The First Men led by General Steven Abbot (Neil Sandilands) is on the hunt for Hybrids. They’ve chased Gus out of his preserve and interacted with both Dr. Singh and Aimee in their own adventures. But because not only Gus is a Hybrid, but he’s older and can actually talk (something that surprises everyone who interacts with Gus), he’s a top prize for them to get. It’s always a cat and mouse game with Jepperd, Bear, and Gus trying to avoid The First Men. Luckily for Gus, Jepperd is a former professional football player, skilled fighter, and also has a soft spot for Gus and time and time again comes to Gus’ defense to save everyone from certain doom. By the end of the 8-episode inaugural season, there’s a confrontation that raises the stakes and sets the tone for the inevitable second season.

Let’s get the bad stuff out of the way: almost nothing! If anything, it’s too few episodes as Netflix is often known for bloating their shows with 10 episodes. By the end of the 8th episode, you are almost craving an additional two episodes

This is a damn near-perfect first season of a show. While all the headlines will be giving praise to Robert Downey Jr. (still staying in the world of comic books) and his “Team Downey Productions” he runs with his wife Susan Downey for executive-producing Sweet Tooth, a lot of the credit is due to showrunner Jim Mickle, who is best known for Sundance TV’s Hap and Leonard. Sweet Tooth manages to be genre-defying as the show merges so many different types of storytelling elements together. It has the “lone wolf and cub” dynamic that made The Mandalorian so popular, it has incredible world-building to give you a post-apocalyptic world devoid of governments similar to a Walking Dead or a Mad Max, where societies have to really try and figure things out on their own, and plenty of other things that make it extra awesome.

Because we live in a Covid world, Sweet Tooth is also gripping as there are so many traits in the show that feel all too familiar with what we are going through. Flashback scenes show the chaos and confusion at the beginning of the pandemic show overwhelmed hospitals and everyone wearing masks and fearful of who may have the virus and who may not. There’s a scene where Gus and Jepperd encounter a family that refuses to take off their masks, even after it’s been confirmed that they don’t have The Sick. There’s even a comedic moment later on in the series where two people working at a hospital engage in conspiracy theories in regards to the idea of wearing a mask or not. While Sweet Tooth is based on a 2009 comic and most of the production was filmed before a Covid-induced shutdown, plenty of things feel as though the entire story was made during the pandemic as so many things echo real life in the most brilliant way.

In addition to the story and the hyper-realism of a fantasy TV show about animal children, the brightest part of the show is the performances by the chore characters. There isn’t a weak link at all in the cast as everyone brings their A-Game in Sweet Tooth. Will Forte, who’s often known for his comedic performances, is exceptional as Gus’ father “Pubba.” He plays the role completely straight and is a significant departure from what he’s known for (very much like Bob Odenkirk showed how good he can dramatically act in Better Call Saul). Nonso Anozie has given plenty of supporting performances in his career, but his performance as Jepperd “The Big Man” is sure to raise his profile exponentially as he delivers an incredible performance of the gentle (but still very rough) giant who cares for a young boy and by the end of the season you are completely in love with him. Finally, Christian Convery as Gus delivers a career-defining performance. Once again, Netflix opened their “perfect child actor” lab and cast Convery as Gus, who is the heart and soul of Sweet Tooth. Gus is a big bucket of hope and no matter how bad things get for him, Jepperd, and Bear, he’s always hopeful and confident that they will succeed in their adventure. Convery acts with a wisdom beyond his years and truly delivers in this role.

While Netflix is still king of streaming, they have been somewhat needing a big hit to justify their ever-increasing subscription costs. And it looks like Sweet Tooth is it for them. Dare I say, they might have found their next Stranger Things!  The show marvels because it’s an incredibly hopeful post-apocalyptic show with much less doom and gloom that we are used to from the genre. Sweet Tooth almost operates like an adventure fantasy that just happens to be during a pandemic. While there are some moments of horror and terror (the show isn’t without its share of killing and bloodshed (and probably a step above the TV-14 rating it has), it’s the heart, compassion, and soul of the series that makes this possibly the BEST new TV show of 2021 (Yeah, I said it!).