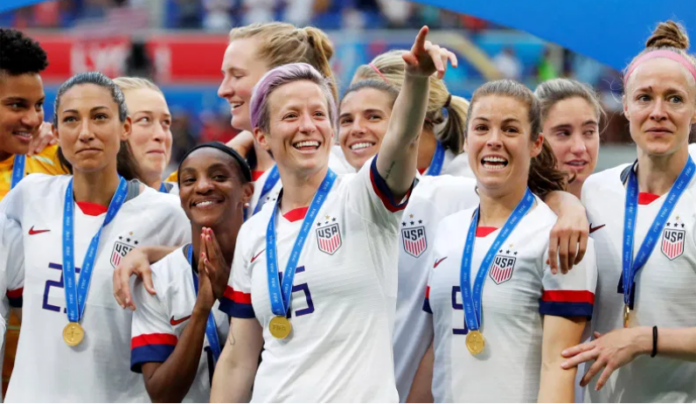 Have you ever watched a documentary to learn about something new? Whether it’s a biography, event, and/or topic/subject matter that sparks your interest? Or do you watch because that documentary pertains to one, if not all the above asked categories that has affected and/or involved you personally? Whatever floats your boat, right?

I am always on the hunt for learning about some one(s)/thing(s) new and even more stoked that I get to do reviews/interviews about them. LFG is a new documentary that I can 100% understand, respect, and mostly relate to regarding the bullshit of what the U.S Women’s Soccer Team have gone through. While I’ve never played for a national team or won any world cups, I do know what it’s like to be told that your sex to the sport of soccer was “entertaining, but not worth the investment” to community college standards. After two years of hard work and dedication on so many levels (even out raising and performing the men by a long shot) the curtain was closed on our small town women’s soccer team, permanently. A metaphorical kick to the vagina that’s still felt to this day!

LFG highlights the kick-ass achievements and the movement that came to be when the U.S Women’s Soccer team fought for equal pay. HBOMax and CNN Films collaborate with award winning filmmakers Andrea Nix Fine and Sean Fine (Innocente, 2012) and feature interviews with Megan Rapinoe, Jessica McDonald, Becky Sauerbrunn, Kelley O’Hara, Sam Mewis and with several others who represent and support the women’s team and plea for equal pay.

Every team sport, regardless of gender, has a battle cry or song that pumps them up before the game.  During my high-school years and at the turn of the millennium, our song was “Eye of the Tiger” by Survivor. For the current U.S Women’s Soccer team it’s the expression “LFG” which is an acronym for Let’s. Fucking. Go!! These expressions/songs motivate and inspire individuals of “getting their head in the game” but are reminding, in the sense of, how and why they’re there in the first place. These badass ladies have to prove their worth just to qualify and work twice as hard only to be provided much less and often unflattering accommodations. This apathetic environment practically force these women into early retirement. Female soccer players have endured these ongoing issues for decades. The current women’s national team declares that “enough is enough”!

A few months before the 2019 FIFA Women’s World Cup, the players filed a class-action, gender discrimination lawsuit against the U.S. Soccer Federation. Setting the documentary stage for LFG. The film interweaves athletically skilled performances, including a record-breaking World Cup victory in 2019, with the players’ ongoing pursuit for equal pay. LFG gives insight to what the players experience as they meet the physical demands and pressures of being some of the world’s top athletes and working women; some even being mothers. These ladies showcase their courage, unflinching spirit and resiliency in an effort to create long-lasting social change with the biggest fight for women’s rights since Title IX. Deservedly so!

Megan, Jessica, Becky and the rest of the team are not just a group of talented women who just happen to be fucking amazing at soccer. They are a group of women who defied the odds, overcoming the sexism and misogyny that tries to kick the legs out of the very platform they’ve worked their asses off to stand on. These ladies are the true inspiration to the rest of us who never got to finish, let alone the chance, to aspire to the greatness they’ve achieved in this sport. Andrea Nix Fine, husband Sean, and their team did an outstanding job of bringing this story to light. They really do care about these wonderful women players and the sacrifices they make for the sport. It truly is all around perfection.  We should all be proud! Definitely worth a watch!!