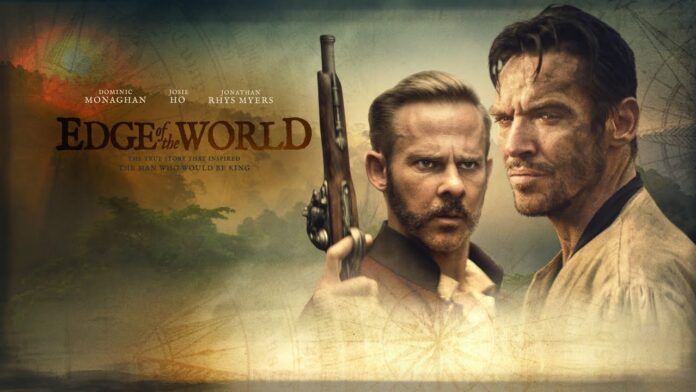 Review: Edge of the World

I don’t know about you guys, but I’ve been dying to finally see a film about the first white rajah of Sarawak in Borneo. I’m talking, of course, about Sir James Brooke, a British explorer from the 19th century who would have been the kind of guy Indiana Jones grew up idolizing. Ok, that first line was obviously sarcasm but, truth be told, cinema was made for stories like this. James Brooke, played impressively here by Jonathan Rhys Meyers, a weathered explorer who traveled to Borneo amid a non-violent power struggle being fought by two cousins. Brooke’s expedition which consists of two others, Arthur Crookshank (Dominic Monaghan) and Charlie (Otto Farant) arrives in Borneo and finds Brooke instantly in love with the world he finds. After helping cousins Badruddin (Samo Rafael) and Mahkota (Bront Palarae), and thereby squashing a rebellion Brooke is named the Rajah of Sarawak by the Sultan of Brunei. Brooke then finds love with a beautiful local named Fatima, and in a perfect world credits would roll. This, however, is not a perfect world and seeing as how this is based in fact there are threats looming that must be dealt with.

The film is, at its heart, about Sir James Brooke’s love of the land he’s discovered in Borneo. What’s even more apparent is the love that filmmaker Michael Hauusman has, or at least the care he took in showing the beauty of, Borneo itself. The film was shot on location and is shown, almost lovingly, throughout. I’ve never once thought of adding that to my destinations of life list but I have to admit, it’s there now. Then there’s Jonathan Rhys-Meyers, an actor that people have lauded for a while thanks to his work on The Tudors, but I’ve never really been sold by him…until now. Much the way Charlie Hunnam impressed in the similar The Lost City of Z, Rhys-Meyers creates a believable and compelling hero for our story with an intensity that lets you believe that he would embrace an entirely new world. It’s one thing to explore, but to set roots takes something else. 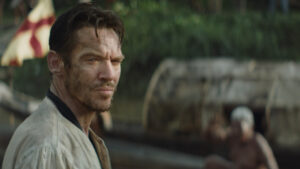 The story itself leaves something to be desired. As epic as it looks the events surrounding never feel worthy of their surroundings. Maybe that’s cynical of me, this was some history making stuff, but it almost feels like a build up to a Braveheart level war that never occurs. What we do get is something we’ve seen many times before, Dances With Wolves, The Last Samurai, or The Last of the Mohicans. That doesn’t take away the recommendation to see it, like those movies this one is also full of strong performances and beautiful visuals that make the time you spend with it worth while.