In the 1980s, the United Kingdom was flooded with video nasties – low budget exploitation and horror films. Enid Baines (Niamh Algar) plays a vital part in keeping British citizens safe from these films in Censor. Enid is a film censor – she watches hours upon hours of video nasties, viewing the atrocities so the public doesn’t have to. Along with the rest of her team, Enid decides what films wouldn’t be too damaging if the public viewed them. Enid is also as professional as they come. She is one of the first to arrive, and the last to leave. Often, she will sit alone in her dark and dimly lit office, pouring over reports, trying to get every detail right. Enid has the ability to separate her work from reality, allowing her to view these horrors without any lingering effects.

One fateful day a producer of one of the video nasty studios, Doug Smart (Michael Smiley), is in the office with a special film. It is an archival movie from a legend in the business – Frederick North (Adrian Schiller). North and Smart want Enid to be the one to watch and score the film. As Enid watches, she begins to uncover suppressed memories from her childhood. Memories from the day her little sister Nina (Amelle Child Villiers) disappeared, never to be heard from again. Memories that she’s watching unfold in front of her on screen – courtesy of Frederick North. As Enid keeps watching, she can’t help but notice how much actress Alice Lee (Sophia La Porta) looks like what she envisioned Nina would as an adult. Enid is convinced this is no coincidence and vows to find her sister. 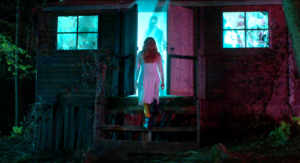 Censor is directed by Prano Bailey-Bond who also co-wrote the film with Anthony Fletcher. Censor is Bailey-Bonds first feature length film and overall was an impressive debut. Bailey-Bond makes numerous cinematic choices throughout the film that work incredibly well. She manipulates colors to not only show the dark and desolate state of the world, but Enid’s inner turmoil. Enid is frequently bathed in red and/or blue mirroring the struggle within her. The meticulous and dependable Enid versus the reckless Enid that is obsessed with finding Nina. Bailey-Bond highlights Enid continuing down this treacherous path through the distortion of sound and sight, with Enid in a hazy, almost dream like state. 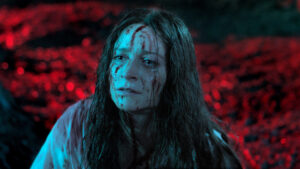 Bailey-Bond and Fletcher weave in flashbacks throughout the narrative to give the audience a glimpse of Enid’s past. As Enid is unearthing the memories the audience is experiencing them as well. These flashbacks not only help move the narrative forward, but they fill in valuable gaps of Enid’s past and what made her the way she is. Bailey-Bond and Fletcher manage to insert brief moments of humor. Just a quick line or statement at various points during Censor, but a majority of the humor lands. As Censor progresses, it devolves into the exact type of video nasty that Enid is trying to keep from the public. The film had an interesting premise and first few acts, but it begins to waiver in the second half. For a horror, the scares are also few and far between. Censor is worth a watch, but make sure to keep expectations in check.

Censor is available in theaters now, and will hit VOD on June 18th.