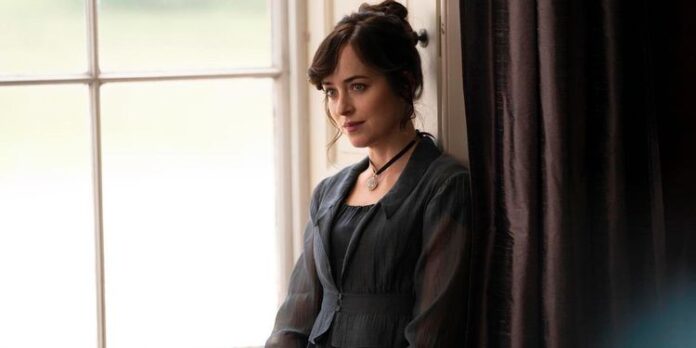 After the success of 2020’s Emma, many studios have jumped aboard the Jane Austen train. Netflix currently has two Austen adaptations in the works The Netherfield Girls, which is a modern retelling of Pride and Prejudice, and Persuasion, a retelling of the book of the same name. The latter stars Dakota Johnson as heroine Anne Elliot, Cosma Jarvis as Captain Wentworth and Henry Golding as Mr. Elliot. Suki Waterhouse and Richard E. Grant’s roles in the film have yet to be announced.

If you are unfamiliar with Persuasion, its the story of Anne Elliot, a middle daughter who is constantly put upon by her once-wealthy family. At nineteen, she falls for a penniless and station-less naval officer, Fredrick Wentworth who then proposes to her. When she approaches her father and a family friend about the engagement, she is advised against going through with the marriage and breaks Wentworth’s heart .

Seven years later, Wentworth comes back from, now a rich and distinguished Captain in want of a wife. Anne is still single, now officially a spinster and still in love with him. However, the reunion is not a happy one as the Captain wants nothing to do with her. Throughout the events of one summer, the two must reconcile their pasts in order to find individual happiness in the future. Yesterday, Netflix dropped the film’s first three stills.

When the project was first announced back in April, the official press release described this retelling as a “modern, witty approach,” which many fans of the novel took as a modern adaptation. This would make sense considering Searchlight Pictures announced all the way back in September that they were releasing a version of Persuasion with Succession’s Sarah Snook taking on the role as Anne Elliot. A few months later it was announced that Joel Fry (Yesterday, Cruella) would be playing Captain Wentworth with Mahalia Belo directing and Jessica Swale writing the screenplay. Like its competition, it will be released in 2022.

Personally, I’ve been more excited for the Searchlight version of Persuasion and these photos prove to me that I’m on the right track here. With Netflix confirming the production will have the traditional setting, it feels more like  Also I hate to say it, this cast is too conventionally pretty! Jarvis will be the most swole Captain Wentworth ever to hit the screen, which isn’t necessarily a bad thing. Also, Anne Elliot is not meant to be conventionally attractive hence why she is a spinster at 27 and no one around her is surprised by it. There’s supposed to be something quiet, a little plain and nuanced about the character. Dakota Johnson is gorgeous and I’m sure she will downplay her charm for the role, but Sarah Snook feels like better casting, understatedly beautiful with reserved sadness. So far based on look and past roles, the leads of the Netflix version feel miscast.

But we will see what both adaptations have in store for us in 2022. Check out the photos below.