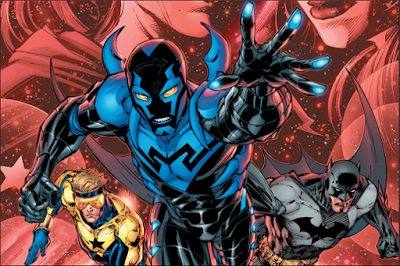 It can’t always be about Batman, Superman, Wonder Woman, and Aquaman. There are loads of superheroes under the DC Comics umbrella for Warner Bros. to pick from, and not all of them are meant for the big screen. We’ve heard previously about mid-budget films like Batgirl that may go direct to HBO Max, and now it appears that Blue Beetle will be one of them, too.

According to the LA Times‘ interview with Warner Bros. Pictures Group Chairman Toby Emmerich, Batgirl and Blue Beetle are skipping theaters entirely and will be exclusive to HBO Max.

Personally, I find it disappointing that a major female hero like Batgirl, and a Latinx hero like Blue Beetle will be relegated to streaming. I wouldn’t be surprised if Supergirl goes the same way. On the other hand, it’s great that WB is diversifying their slate and spreading the wealth, so to speak.

Batgirl has a script by Christina Hodson (Birds of Prey) and directors in Adil El Arbi and Bilall Fallah (Bad Boys for Life), while Blue Beetle will be directed by Angel Manuel Soto (Charm City Kings). No release date has been set for either.

Joe Manganiello Sheds Light On Ben Affleck’s ‘Batman’ Movie, Plus Deathstroke And Batgirl’s Role In It

‘Batgirl’ And ‘Zatanna’ Films Are Apparently Still In The Works