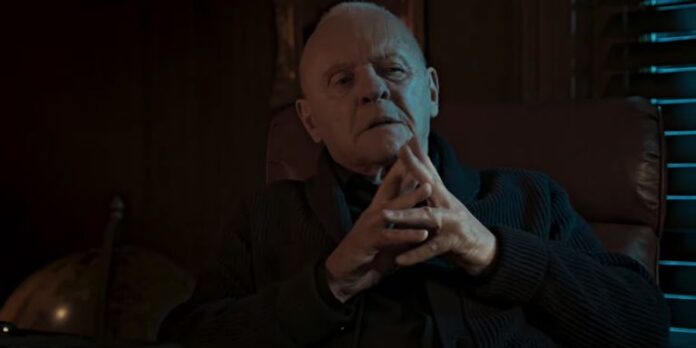 Directed and produced by Nick Stagliano, The Virtuoso is a noir-esque telling from the inside perspective of a wary hitman (Anson Mount, AMC’s Hell on Wheels) who is dispatched to a small town to snuff out his next target. His ominous mentor and boss (Oscar winner Anthony Hopkins) orchestrate the assignment, providing little information for the enlisted assassin to go on. Arriving at his intended destination, a local diner, The Virtuoso must identify his mark amongst several suspected patrons and leave quietly without raising too much attention toward himself. Complications arise when an enticing waitress (Abbie Cornish) of the rustic restaurant may hinder his operation and local law enforcement, The Deputy (David Morse) is seemingly around every corner.

Being a professional hitman and the repercussions that come along with the job, The Virtuoso (written by James C. Wolf and Nick Stagliano) does have an appealing draw when it comes to this action/thriller genre. Possessing a somber tone that could juxtapose the stylings of a dissheveled and brilliantly hot mess of Peter Falk’s sleuthing in murder mystery thriller’s Columbo to the likes of say Guy Ritchie’s and Quentin Tarantino’s crazy ass hitman entanglement films (without the dark humour) instead, flatlining on a majority of key aspects. Underwhelming, highly predictable and simply put, it is an overall disappointment.

The Virtuoso is pretty much all narration. It is extremely long-winded, repetitive and after a while a bit obnoxious. A great degree of narration dialogue went into explaining the importance of how time and precision are to be executed. Going as far to claim by comparison that he is a “virtuoso” which by definition is a person highly skilled in music or another artistic pursuit. An expert assassin who fulfills his agenda and maintains a low key/off the grid profile, competently active and while doing so with NO DISTRACTIONS. Yes, that’s expected! Nearly 40 minutes of this in the beginning, more in the middle and sure enough, ending on the similar notes is unnecessary and takes away from what could have been a better in depth storyline between the male and female lead actors. With minimal spoken words between all characters and even little interaction, there was no stand out performance nor hidden shocks or surprises as each word and encounter is practically a clue; making them easily noticeable.

The cast consists of seven primary-ish dramatis personae, eight includes the adorably one eyed and fluffy white stray dog that pops out on occasion. The Mentor (Hopkins) rarely graces the screen saying almost no words but has one hefty speech that does touch on a cruel yet truthful point. The two men meet up in a cemetery after The Virtuoso’s last assignment had innocent casualties and him ignoring the bosses check-in phone calls. The mentor proceeds to reluctantly tell him of a circumstance having known and served with the Virtuoso’s (Mount) father in prior years while they are standing near his tombstone. It’s in this morbid story that the mentor’s message is beyond crystal clear as to who and what kind of man he is truly capable of and incidentally, gives big insight to where exactly the direction of the film is heading.

As for the remaining roles, The Waitress (Abbie Cornish), The Loner (Eddie Marsan), Handsome Johnnie (Richard Brake), Johnnie’s Girl (Diora Baird), and The Deputy (David Morse) definitely give off a “holding back secrets” vibe that makes the virtuoso’s disposition all the more challenging. Unfortunately, each presentation felt very dry and lacked any real chemistry which made the whole experience feel like attending an amature murder mystery dinner theatre event. Clues stick out like a sore thumb and should be quite obvious to the hitman on his endeavor but tend to go over his head. It may have been written to be that way as he is conflicted with past turmoil and appears to be why he’s on this expedition to begin with.

There really is not much of a soundtrack for this movie either. Given the tone and title of the film, I admittedly was expecting some virtuoso soloist music of either a piano, volin, perhaps a cello or even a single vocalist that would accompany the mood but it did not. Often taking more of the dark and silent persona, the absence of sound in general further adds to its emptiness. Again, maybe that was the intention but I certainly was not impressed. The devil’s in the details and the details are in total disarray.

The Virtuoso does it’s best to portray the day in the life of a hitman and the interpretation of what the job entails however, it fails to really capture the thrill of mystery and intrigue and leaves the desire for wanting a lot more action. This is one film, I’m sorry to say, that I do not recommend at all. Not even if you’re bored and there is literally nothing else to watch or do. You would get more excitement out of reading Agatha Christie’s Hercule Poirot series, watching reruns of The Sopranos or hell, even playing Clue. OK, so maybe I just described my kind of day but you get the point.