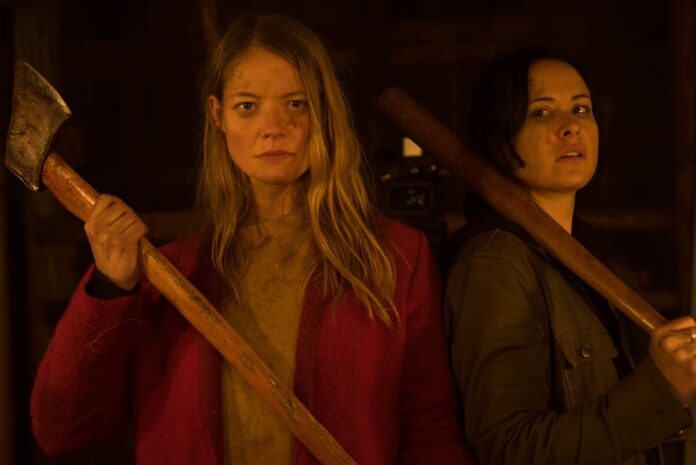 Renee (Tommie-Amber Pirie) and Valerie (Sarah Allen) are a couple who, although happy, have hit a patch in their relationship. Hoping for some peace and a chance to find their path forward they plan a weekend trip away with some friends to a rural cottage called The Retreat. Meanwhile, their friends arrive at the cottage before them and of course, immediately disappear. There’s a backcountry characteristic insight of camo/hunting gear that is sold in a small town convenience store, a metal ballsack (yes, “trucknuts” are very real) seen hanging from a passing truck and awkward exchanges with some locals that are just creepy as hell. It feeds the notion that there is some shit about to go down. [Yeesh, those images take me back to my hometown as a kid growing up.] Renee and Valerie arrive at the cottage and notice that their friends have started to unpack but are nowhere to be found. Assuming they are out and about exploring, the ladies decide to do the same. Their quaint r & r is short lived when it becomes apparent they are being watched. Panic turns to dread when it’s realized that both women are being hunted and must work together to survive.

The Retreat is well written, definitely a badass horror/thriller in its own right and I am genuinely impressed. Alyson Richards (who wrote the film) does a good job of bringing to life a hellish nightmare that more often than it should, ripples fear and plagues the LBGTQ+ community. I love the way the story progresses and builds intensity; pulling you along through the fear, to pure disgust and eventually to revenge brutality. Renee (Pirie) and Valerie (Allen) have great chemistry that stands out throughout the film. Their growing strength and love for each other, given the morbidity they endure, feels realistic and leaves you rooting for their survival. “Time to cull” and “We’re not going to get killed by a bunch of dudes wearing camo” are two of my favorite lines said by Renee and actually do have relevance to the storyline. It’s unique to film dialogue, oddly fuckin’ funny and resonates with me personally having been on a deer hunting adventure(?!) with a girl I was close friends with and her family, mostly men, in my youth. Those memories haunt me to this day and needless to say, it never happened again!

Some of the scenes were so dark that I found myself squinting my eyes and shifting around trying to see what was going on. I don’t know if that was intentional but it was frustrating for sure. This movie does not go to the extreme with a lot of blood and gore (now hang on, there are some awesome moments) and the plot point is pretty simple. Not necessarily a bad thing but, it may come across as a disappointment for those hard-core slasher fans who love that crazy and off-the-wall, twisty-spinny stuff regardless of who or what’s doing it.

The Retreat does, however, expose the true threat and terror of how sadistic and proud bigotted assholes can be and it makes the revenge served all the more sweet. Oh, and don’t underestimate the ballsack truck either! I wouldn’t see this in the theater but it’s worth it to rent on demand. It’s the perfect kind of flick to watch snuggled up with your partner, some microwaved popcorn or whatever movie snacks you like, and enjoy your night, comfortable at home.