Home Reviews Jake Review: ‘The Djinn’IFC’s Newest Horror Will Make You Be Careful What You...
Facebook
Twitter 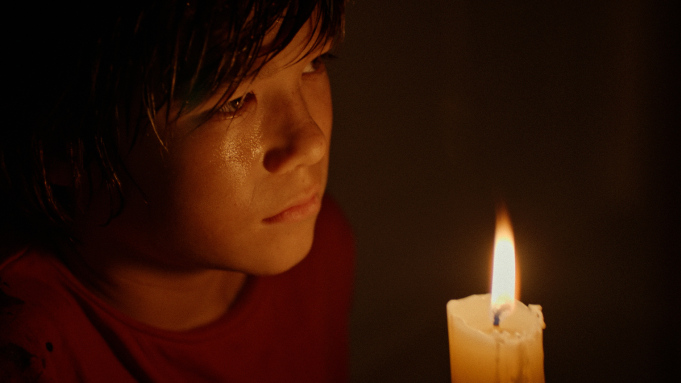 Dylan Jacobs (Ezra Dewey) and his father Michael (Rob Brownstein) are trying to pick up the pieces in The Djinn. It is the fall of 1989 and a few months earlier Dylan’s mother Michelle (Tevy Poe) took her own life. Now it is Michael’s sole responsibility to raise Dylan and look out for him. Dylan has a condition where he has lost the ability to talk, communicating in sign language with those around him. He blames his condition on what drove his mother to commit suicide, a notion that Michael quickly dispels. Regardless of his father repeatedly dismissing it, Dylan can’t help but feel the pangs of guilt. That coupled with his condition have made life challenging, and he longingly watches neighborhood children playing outside.

One fateful evening as Michael is out working a graveyard shift, Dylan is drawn to a closet where he finds the “Book of Shadows”. Almost immediately he stumbles upon the “Wish of Desire” – and wanting nothing more than to be able to speak, he performs the ritual. Unfortunately, it’s not as simple as that and the wish comes with some strings attached. Shortly after, things begin to go wrong as a dark presence known as the Djinn (John Erickson) begins terrorizing Dylan. Dylan must do all he can to survive until midnight to be able to vanquish the Djinn and receive his wish.

The Djinn is the brainchild of David Charbonier and Justin Powell who wrote and directed it together. The film has a very minimal cast and takes place entirely in one apartment. A majority of the film is Dewey trying to make it through the hour against the Djinn. A strong performance was necessary to make The Djinn work and that is exactly what we get from Dewey. He shines from beginning to end and I was incredibly impressed. Not only was Dewey the sole focus for a majority of the film, he had to carry this burden without any dialogue. The audience relied on facial expressions and body cues to convey what Dylan was thinking/feeling and Dewey portrayed this masterfully.

Charbonier and Powell are able to establish an atmosphere of dread throughout the entire film. From exaggerated/almost hypnotic noises of Dylan’s bedroom fan to creaking doors and Dylan’s wheezing breathes – every little noise leaves you on the edge of your seat. They frame shots to just show tiny corners of rooms exposed – and you find yourself staring at them just as much as Dylan – waiting with bated breath for horrors that may be lurking. 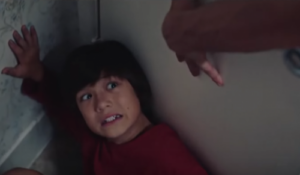 The Djinn has a very short runtime, just about an hour and fifteen minutes, but Charbonier and Powell take full advantage of it. There are numerous scenes that will be stuck in my mind for quite some time. They found the perfect mix of almost dead silence and loud noises mixed with spot on music choices. It is hard to stand out in the horror genre, but The Djinn manages to do so. Charbonier and Powell’s filmic choices combined with the unique elements of the monster itself set The Djinn apart. The film also has a level of heart to it that is not commonly seen in the genre. It dives deeper than scares and gets at family grief and bonding as well. The tension, scares, and acting of Dewey make The Djinn a film absolutely worth checking out.