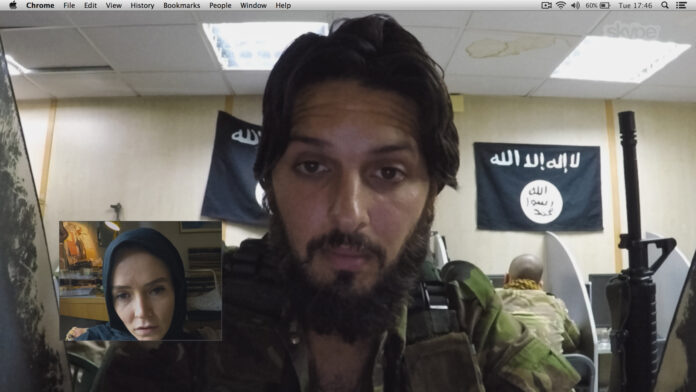 Let’s be honest and say that the ScreenLife genre of films, those which take place entirely on computer screens and devices, is a gimmick we assumed would be short-term. However, with films like Searching, Unfriended, and the newly-released, edge-of-your-seat thriller Profile, we’re seeing just how far they can truly go when applied to a real-life story with actual implications from its core relationship, built as so many are, on a web of lies shrouded with ease by the Internet. That it’s based on a true story, one steeped in the War on Terror, it adds a visceral immediacy that is undeniable.

Profile is indeed based on an actual story, that of a French journalist who used Facebook to make contact with a high-ranking ISIS recruiter in Syria and break. The fictional version from director and ScreenLife purveyor Timur Bekmambetov fiddles with the details, but the gist is the same and no-less timely. In his version, the journo is a British freelancer named Amy Whittaker (Valene Kane), who is scrambling to pay rent in her flat, while also house-hunting with her annoying boyfriend (Morgan Watkins) who insists on the most expensive spot way out of their budget. So she needs a full-time staff position STAT, and so comes up with a scheme so dangerous it might be the start of a horror movie.

Amy will go undercover as “Melody Nelson”, a recent convert to Islam, in in hopes of attracting an ISIS recruiter who will spill all of the details on how they entice young, pretty, white women to be gun-toting jihadists. It’s impressive the speed in which she creates this double-life of hers. A Facebook profile is whipped up in a few clicks, and within a few more Amy has shared multiple videos of ISIS propaganda, including grisly scenes of murder. Before you can say “Extremist Bachelorette”, she’s hit up on Messenger by Bilel (Shazad Latif), who starts spitting game almost immediately. Forget that he’s always got a machine gun in tow and his grainy video footage has him riding through war zones; Bilel is just a guy who really loves cats and is looking for a bride. Melody, YOU are that special someone. Won’t you come fly to Syria and get married up?

This is all set against the backdrop of a recent spate of deaths of young British women who fell for such schemes, only to arrive and be sold into sex slavery, or stoned to death when they tried to flee. Amy’s editor is cool with it, though. I’m sure wildly irresponsible editors like her exist in reality, but she felt like a cartoon character here. The only thing that matters is the story!

Tension arises from the little things we all do when sitting at our computers for too long. We get lazy, reckless, sloppy. For Amy, the slightest misstep would mean more than having her cover blown to Bilel, it could be death. So we bristle as she whisks through her various windows so haphazardly, or rushes to put on her headscarf at the last possible moment. Is that a tattoo on her finger? Make sure the dog in her apartment is quiet. Any of these things could trigger Bilel’s suspicion.

Bekmambetov is an old hand at this genre now, and he knows how to best utilize it. Our perspective is pretty much always from Amy’s view; we see how easily Bilel uses the distance, his surroundings, as means to seduce. It doesn’t hurt that he’s insanely charismatic and charming; so much so that you can almost ignore the awful things he brags about, because the next sentence he’s professing love and sharing cooking tips over Skype.

Have you ever felt a tight bond with someone you’ve only known online? Gamers do it all of the time, and it happens with such simplicity we don’t even think about it. For Amy, it’s unclear for a stretch whether she’s just really dedicated to the illusion, or if she’s fallen victim to the very techniques she hoped to expose? Are Bilel’s feelings genuine? Or is he so dedicated to his mission that he will pass up a possibility of actual love? Is that even a consideration for him? And what happens when this charade is finally exposed, as we know it must because there’s a story that needs to run?

The problem Profile faces is that it constantly needs to up the ante and can’t help taking some ridiculous detours that strain credulity. However, even then there’s an unnerving quality because this isn’t too far out of the realm of possibility from just about every angle. Amy’s willingness to engage in such a sensational gambit, to sell a news article, even feels like a comment on the desperation of online media. It’ll be interesting to see how this film ages, but for this moment in time Profile is incredibly scary and immersive for being so incredibly relevant.

Profile opens in theaters on May 14th.