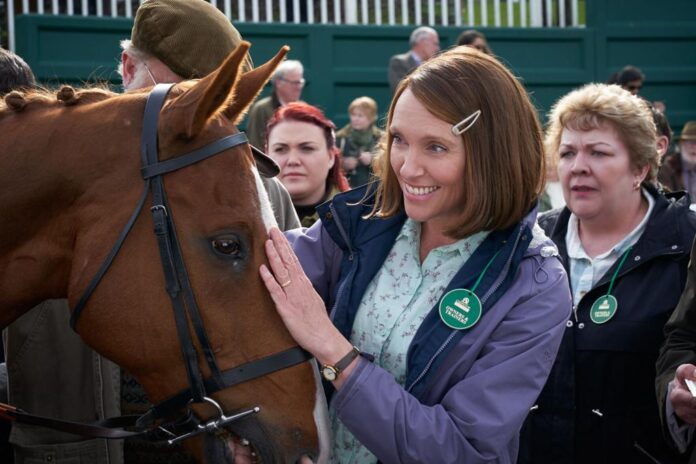 It was inevitable that 2015 Sundance Award-winning doc Dark Horse would become a feature film. How could it not? What with its true story of a group of working class Irish folk gathering what few earnings they could must to breed a racehorse, only for it to become the most unlikely of equestrian champions. It’s the stuff underdog sports dramas are made of, right? And so last year, Sundance was once again home to the story of Dream Alliance with the narrative drama, Dream Horse, and it’s a pure charmer if there ever was one.

I’m going to be honest here in that Dream Horse probably is coming around at just the right moment for me. Horse races were a joy for me growing up, and I like them a lot still. But they’ve barely been given a passing thought during the pandemic, and this movie made me want to go back so incredibly badly. If there’s anything that can be said about the film it’s that all of the characters share a passion for horse racing and a love of the animals.

Toni Collette plays Jane, an overworked and bored housewife in Wales who is in need of something to stimulate her again. It certainly won’t come from her dull, couch potato husband Brian (Owen Teale), nor her aging parents who she cares for despite their complete indifference. Jane’s nurturing side extends to animals, as well; she has a dog to feed, some geese, etc., but she really loves horses. So when hotshot ex-racehorse owner Howard (Damian Lewis) begins shooting his mouth off in the pub, Jane takes it upon herself to look into what it takes to buy one.

Hint: they’re expensive. So she gathers up some of the misfit locals, most of whom barely have two nickles to rub together, and convinces them to pitch in a tenner ($10) a week to form a syndicate, sharing in the costs and winnings of this racehorse that is still just a pie-in-the-sky aspiration. After purchasing the broken down mare Rewbell, the team scrounge what they’ve got to have her mated with a thoroughbred. The result is Dream Alliance, a beautiful brown horse that is like all of their hopes and dreams brought to life.

It’s that last aspect, all of these downtrodden people coming together in pursuit of a common hope, that gives Dream Horse that extra emotional punch. That’s it’s also loosely based in fact leaves you feeling that there are still good, wholesome stories to be told out there. Screenwriter Neil McKay and director Euros Lyn aren’t breaking down any genre walls here; you can predict every turn the story takes. There are wealthy racehorse owners who get a bit prickly at the poors being part of their elitist sport, but the screenplay doesn’t dabble too long into the class divide. Cheesy montages take you through Dream Alliance’s early successes, followed by the syndicate’s triumphant victory parties and eruptions into song. And, of course, there must also come a turn for the tragic and a moment that anybody with a love for horses will dread but also see coming a mile away.

What you might not see coming is Lyn’s dynamic camerawork during the horse racing scenes. While it’s hard to distinguish Dream Horse‘s quiet moments from any of a dozen other Irish films set in rural blue collar towns, on the track there’s a different kind of energy. Lyn’s camera captures the speed and the danger of such close-quarters races, but also the wind going through the horses’ manes, the dirt and mud kicked-up with every gallop. Beautiful stuff. I do wish, however, that they could’ve spent at least some time with the jockeys, especially the one riding Dream Alliance. But with so many characters buzzing around that was probably impossible.

You’re not going to get deep characterizations of the syndicate’s members or anything quite like that. One’s the town drunk, another wears weird socks, one’s a butcher, one lady likes to get dressed up; that’s about the extent of it. They’re all light-hearted, eccentric comic relief meant to liven up a movie that’s meant to leave you feeling happy, and if that’s the goal then Dream Horse deserves the winner’s purse.

Bleecker Street will release Dream Horse in theaters on May 21st.