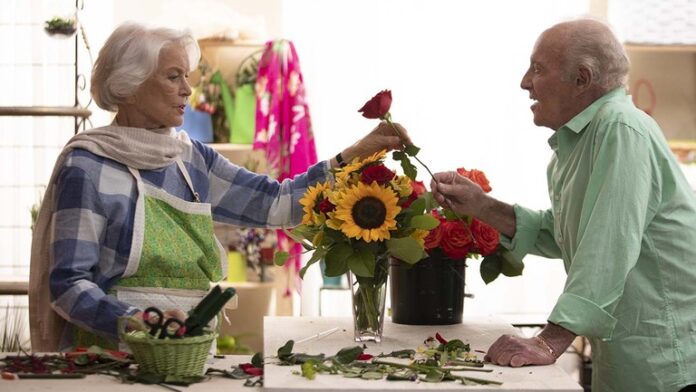 A mean girl in high school might grow up to be a mean girl at the senior citizens home. In the upcoming comedy Queen Bees, Ellen Burstyn plays a fiercely independent woman who temporarily moves into a senior living community, only to face a clique of “mean girls with medical alert bracelets” who really should be old enough to know better. But then, what fun would that be?

Burstyn is joined by James Caan (in an extremely rare role), Ann-Margret, Jane Curtin,
Christopher Lloyd, Loretta Devine, Elizabeth Mitchell and French Stewart. My mom absolutely LOVES this cast, let me tell you.  The film is directed by Michael Lembeck, who has a handful of big hits to his credit including The Santa Clause 2, Tooth Fairy, and Connie & Carla. Okay, definitely not that last one.

Queen Bees opens in theaters and VOD on June 11th.

While her house undergoes repairs, fiercely independent senior Helen (Academy Award® winner-Ellen Burstyn) moves into a nearby retirement community ― just temporarily. Once behind the doors of Pine Grove Senior Community, she encounters lusty widows, cutthroat bridge tournaments and a hotbed of bullying “mean girls” the likes of which she hasn’t encountered since high school, all of which leaves her yearning for the solitude of home. But somewhere between flower arranging and water aerobics Helen discovers that it’s never too late to make new friends and perhaps even find a new love.