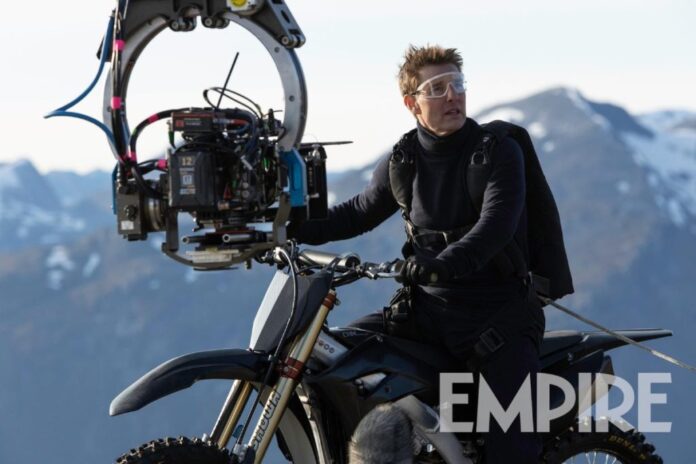 Remember how we used to marvel at the crazy stunts Jackie Chan would pull off and the injuries he endured to entertain us? Well, Tom Cruise has met and surpassed Chan with each new Mission: Impossible movie. Seemingly looking to outdo himself every couple of years to see how close to death he can get, Cruise is really tempting fate with Mission: Impossible 7, which sees his most dangerous stunt yet.

Cruise detailed a deadly stunt in the film that sees him riding a motorcycle.  Okay, so what’s so crazy about that? Well, he rides it over a cliff. And as we all know at this point, Cruise does his own stunts, which must make his insurers go absolutely fucking nuts. He describes it in detail to Empire…

“If the wind was too strong, it would blow me off the ramp,” Cruise said. “The helicopter [filming the stunt] was a problem because I didn’t want to be hammering down that ramp at top speed and get hit by a stone. Or if I departed in a weird way, we didn’t know what was going to happen with the bike. I had about six seconds once I departed the ramp to pull the chute and I don’t want to get tangled in the bike. If I do, that’s not going to end well.”

I imagine the downdraft from the chopper didn’t help, either. All of this sounds insane, and I can’t wait to see how Christopher McQuarrie films it and how everything fits into the movie.

Mission: Impossible 7 hits theaters on May 27th 2022, followed by a Paramount+ release in July.