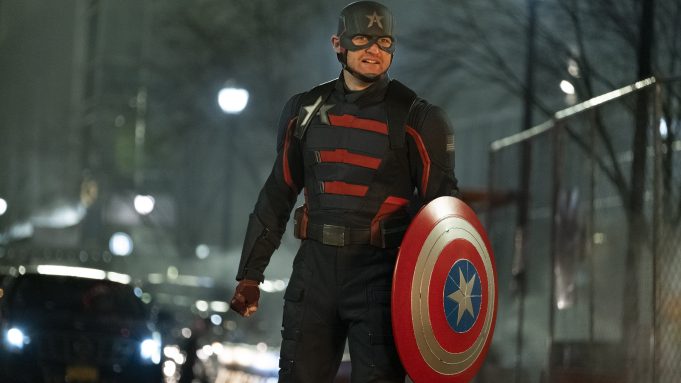 Anybody else stop this final (?) episode of The Falcon and the Winter Soldier after 20 minutes, gasp at the fast pace of it, then look at the time and “WHOOP!!” because there was still 30 minutes left? Just me? Alrighty then.

After six episodes, Marvel’s sophomore Disney+ series has drawn to a close, too soon if you ask me, and with it we get pretty much everything we had been looking for. If you’ve been wanting to see Sam (Anthony Mackie) finally take the step towards becoming Captain America, you got what you wanted; if you wanted to see John Walker (Wyatt Russell) take that step towards becoming USAgent, you got it; if you wanted to see Bucky (Sebastian Stan)…I dunno, save some money by quitting therapy, well, you got it. All this plus a shit ton of fast-paced action, a resolution of sorts to the powerful Isaiah Bradley (Carl Lumbly) storyline, and a reveal of why the heck Sharon Carter (Emily VanCamp) has been here in the first place.

The first 20 minutes of this episode are just wall-to-wall action. Karli (Erin Kellyman) and her Flag-Smashers, joined by hired merc Batroc (Georges St-Pierre) have targeted the GRC and their resettlement talks. Scouting out the area is Bucky, who is joined by Sharon who has borrowed some of that face mask camouflage from Tom Cruise and the Mission: Impossible team. Suspiciously off-screen, but glimpsed flying overhead from afar, is Sam. And we soon find out why they’re keeping him in shadow.

Sam bursts into a fight and holy crap, he’s got sweet new Captain America duds! Basically, they look identical to the suit he wore as Cap in the comic books. I still find it hard to believe that Wakanda would design a Captain America suit without being asked for it, but hey, whatever. They are, I guess, the new Tony Starks and are an easy shortcut when the story requires a character to get a power boost. Explanations be damned.

The new Captain America’s first test is one Steve Rogers had trouble with, too. Batroc is no slouch, and he has the upper hand on Sam for much of the fight, even commenting that the suit doesn’t make the man. While Sam doesn’t have the Super-Soldier serum, he makes expert use of his wings and thrusters (Marvel vs. Capcom fans will recognize a move or two) to keep Batroc off-balance.

Meanwhile, Bucky’s gullible ass gets duped by Karli into a pointless conversation that allows the Flag-Smashers to escape with hostages. Whomp whomp. So that puts Sam in the awkward position of having to bail on his fight with Batroc in order to save the day. I’ll say this; they’re doing some really cool things with the way he uses flying and shield-throwing in partnership. Looks awesome, all of it.

Karli reunites with her gang, who are beginning to look concerned about her kill-or-be-killed tactics. If it comes down to it, she’s willing to die or kill all of their GRC hostages. But before they can really confront her about it, who should show up? Captain America! Not the much-cooler black one, but the disgraced one who isn’t really Captain America anymore.

“I didn’t mean to kill your friend”, Karli says right away. “I don’t want to kill people who don’t matter.”

Walker, as per usual, leaps into a fight he can’t win and gets his ass handed to him by Karli and the other Flag-Smashers. And remember that shield Walker was hammering out for himself at the end of last week? Turns out it’s a piece of tin crap and gets battered into oblivion. See, this is why it’s good to have Wakandans on your side! You get all the cool and sturdy shit.

During much of this, we’re seeing Sam gets brief moments to shine in the public spotlight, almost like a direct counterpoint to Walker’s grisly actions a couple of episodes ago.

Corny, yes, but it’s also such a big thing for Sam that you can’t help but smile.

He’s not the only Captain America getting some shine, either. Walker gets to redeem himself a little bit here, by choosing to help rescue the hostages, who are in a van about to topple over a cliff, rather than throw more punches. To be fair, throwing punches hasn’t really worked out for him, but at least he made the decision Steve Rogers would’ve made. In the end, he’s still shown up by Sam and his newly-rebuilt Redwing.

By now, most viewers have begun to suspect that something’s up with Sharon Carter. And with the Power Broker yet to be revealed, all eyes were on her to be the shadowy villain. Well, they were right. Sharon and Karli have a confrontation where the former reveals that yeah, she’s the Power Broker and wants to bring the young “terrorist” back into the fold. She is, however, disappointed that Karli stole from her, ran off, and started fighting for this greater cause. Batroc, who just doesn’t know when to shut up, decides to use this information to blackmail Sharon, but she decides to just shoot him dead, instead. Well, there goes one badass French mercenary. He had a good run.

Sam arrives and Karli attacks him, only he refuses to fight back. That damn honor code of his! It works in some damned mysterious ways because I sure remember him killing a bunch of folks in the first episode. Whatever. Karli is beating the crap out of him, new Captain America threads or not, and just when she’s got the drop on him Sharon puts a couple of bullets in her. Karli is dead, Sharon is wounded from earlier, and nobody in that room other than her knows she’s the Power Broker. Sneaky!

Sam, looking boss as the new and victorious Captain America, is greeted by cheers from the public and the GRC. However, he balks when they refer to Karli and the Flag-Smashers as terrorists. They were fighting for a cause, one that we know he somewhat believes in, and makes his feelings known…

“We finally have a common struggle now,” he says.

“Every time I pick this thing up, I know there are millions of people who are going to hate me for it,” he says, referring to the shield and the fact that he’s a black man rather than a blonde-haired, blue-eyed white man.

“The only power I have is the belief that we can do better.”

Back in Baltimore, Isaiah Bradley is watching this on the news and it even hits him right in the feels.

Bucky, who hasn’t had a lot to do if I’m being completely honest, does make a funny joke about only hearing “black man in stars and stripes”  out of Sam’s entire speech.

The rest of the episode is essentially cleanup. The remaining Flag-Smashers are about to get away, but are blown up in a truck explosion by Baron Zemo’s butler. Not sure how he got there, but okie-dokie.  Zemo smiled about it from his prison cell at the Raft.

Julia Louis-Dreyfus returns as Valentine Allegra de Fontaine, teasing that she may or may not have been behind the whole thing. Probably not, but she’s got plans that are springing out of it. But first, she brings out John Walker who is decked out in his familiar comic book accurate red & black duds. She even calls him the USAgent and does it with enough bravado we can overlook how stupid that name is when spoken aloud. It’s fine on the page.

“Things are about to get weird”, she says. There won’t be a need for a Captain America in the future she’s planning.

Bucky goes and tells the old man he had been hanging out with that he killed his son. So there goes Bucky’s only friend who isn’t a superhero. He also turns over his book of names to his therapist and thanks her for the help in getting his mind right.

“What are you doing here, Black Falcon?”

Sam isn’t greeted so warmly by Eli Bradley (Elijah Richardson) when he goes to visit Isaiah, who is now okay with him becoming Captain America. The two share a moment, two black men who have fought and bled for this country as superheroes. This story isn’t over. But first, Sam takes Isaiah to the Captain America exhibit at the Smithsonian, revealing that a monument to Isaiah Bradley and his sacrifices is now on display.

The episode wraps up with cookouts, dancing, and laughter at the Wilson household. Of course, that wasn’t the end. You can’t end a Marvel series on good cheer, can you?

A post-credits scene, one of the weakest, really, finds Sharon Carter finally getting that full pardon Sam had promised her. She’s grateful, and agrees to resuming her old job within the government. That’s going to give her all sorts of classified information, secrets, and weapons, which she immediately begins offering to her clientele, right in front of the American flag.

The show ends, not with the regular title credits, but with a new one: Captain America and the Winter Soldier. I kept waiting for the words “Will Return In 2022” to pop up, but no dice. Dammit!

The only problem with these Marvel shows, and the movies for the most part, is that it’s REALLY hard to come up with a fully satisfying conclusion without it being just one big fight. I would say Falcon and the Winter Soldier handled that better than WandaVision, making sure to push forward its major themes between fisticuffs.

Overall, this is exactly in my Marvel wheelhouse and so I loved it. When at its best, exploring racism through the lens of Sam and Isaiah, the global impact of the Thanos Snap and the returns after five years, and John Walker’s storyline, this is some of the best stuff Marvel has done.

Other aspects weren’t always great. Bucky still felt like a sidekick throughout this, and as I’ve said before his “help me be normal” angle simply is repetitive. As much as I liked Erin Kellyman as Karli, the Flag-Smashers never felt like a huge threat. And look, I dug Zemo as much as anybody but feel he’s due for something better after this.

In terms of what this series means to the MCU as a whole? I don’t know. It would be a smack in the face if Sam doesn’t hit the big screen as Captain America soon. I thought the season would end with the announcement of a new Captain America solo franchise.

My big takeaway is that the MCU is a place without the Avengers in it, and that void needs to be filled. I suspect Walker’s evolution into USAgent is where that fits in, possibly to the creation of the Thunderbolts (who in the comics arrived when the Avengers were in another reality) or Dark Avengers. If that’s the case, I’m all for it.