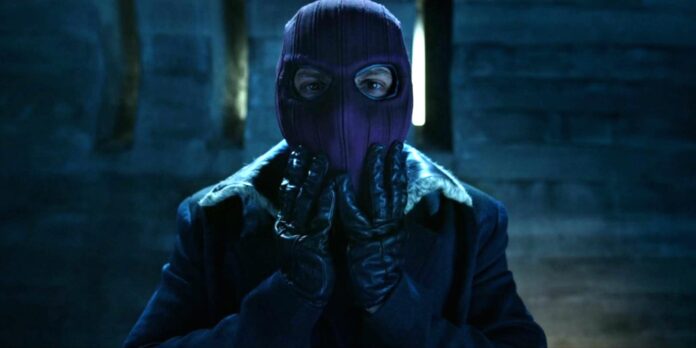 For me, episode 3 of The Falcon and the Winter Soldier was all about one thing: Madripoor. The notoriously crime-infested Asian city is a staple of Marvel Comics, but is famous for being the stomping grounds of a certain short, feral, Canadian X-Man with adamantium claws. After that whole Quicksilver fiasco in WandaVision you can bet I was looking for signs of Logan to show up somewhere.

But of course, there was a lot more going on than just Madripoor. For one thing, Sam (Anthony Mackie) and Bucky (Sebastian Stan) are reunited with Helmut Zemo (Daniel Bruhl), who has been imprisoned since the trouble he stirred up during Captain America: Civil War. Not only that, but another remnant from Cap’s solo franchise returns, Sharon “Agent 13” Carter (Emily VanCamp), the grand-niece of the love he went back in time for, Peggy Carter. There’s some pent-up feelings there as she and Cap also had a romantic tumble, and the only people she can vent at are his old pals who can’t do much but take the brunt of a woman scorned.

Things actually kick off with the new Captain America, John Walker (Wyatt Russell), who is definitely NOT anything like Steve Rogers. He’s off looking for intel on the Flag-Smashers but coming up with nothing, mainly because his bullying attitude is getting him nowhere. Even his sidekick Battlestar (Cle Bennett) sees it. They decide to follow another lead entirely, which means they’re going to be on Sam and Bucky’s tail.

That brings us to the titular duo, who have located Zemo in his holding cell. Bucky goes in alone, facing off with Zemo in a very Clarice Starling/Hannibal Lecter sort of way. While Bucky is no longer under Zemo’s overt control, it’s clear the villainous mastermind still knows how to manipulate him. It’s only a matter of minutes before Bucky has helped spring his old master, telling Sam this after the fact, and the trio are on Zemo’s private plane flying to Madripoor, where info on the Super Soldier serum can reportedly be found.

I’d watch an entire ongoing series of just Bucky, Sam, and Zemo with all of their twisted, complicated dynamics. The journey has a hilarious conversation in which Mackie comments on the tracklist of songs he gave to Cap way back in The Winter Soldier when they first met, pointing out how much Steve loved Marvin Gaye’s “Trouble Man”. Enter Zemo’s undoubtedly racist ass who chimes in, “It is a masterpiece James…complete, comprehensive. It captures the African-American experience.” Sam, puzzled but also sorta appreciative responds, “He’s out of line, but he’s right.”

I also like their conversation about the corrupt city of Madripoor, which has Sam, who seems to be flummoxed for most of this episode, asking the timely question “What’s up with Madripoor? You talk about it like it’s Skull Island.”  Nice King Kong shout out there.

Once in Madripoor, Sam, who complains that he’s dressed like an American pimp, has to take on a separate identity while Bucky has to revert back into Winter Soldier mode. That also means he has to pretend to be under Zemo’s control, an identity he slips into quite easily. Let’s just say Bucky seems more comfortable as Zemo’s attack dog than he does as a regular person trying to figure himself out. They end up running afoul of a local gangster with ties to the Power Broker, and after a violent run-in end up with bounties on their heads. Fortunately, when things start to look bleak, who should come to the rescue but Sharon Carter, who has been going through some shit since we last saw her. 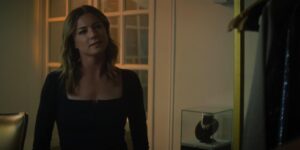 So here’s the deal with Sharon, because she’s quite an interesting character in the MCU. Although we haven’t seen her a ton, she played a big role during Civil War. It was her who stole Cap’s shield and Sam’s tech so they could take part in the final battle. She’s been a fugitive from U.S. justice ever since, and has taken to hiding out in Madripoor, where she’s apparently built quite a life for herself. But it’s weird, because all of the Avengers have been pardoned for their actions. Why not her? The answer probably has to do with her not being a superhero who saved the whole world, but the fact remains she has shouldered the blame for their actions more than they have. Suffice it to say, she’s a bit salty now.

That’s not exactly true, just a bit cynical, maybe. In exchange for a pardon Sharon leads them to a shipping facility that is actually a lab belonging to Wilford Nagle, the scientist who cracked the Super Soldier serum. Nagle, who is just a lab geek basically, gives up the goat on just about everything. He worked for HYDRA to develop the serum, but when they were destroyed he took his work to the CIA. Then he got blipped out of existence like half of the world, only to return five years later with his research gone. But the Power Broker picked up the pieces, and Nagle works for him now. The problem is Karli Morgenthau (Erin Kellyman) and the Flag-Smashers stole 20 vials of the serum, and are on the run.

Zemo, who still hates superheroes and anybody who will create more, promptly executes Nagle. A gunfight breaks out with Power Broker’s goons, the place catches on fire, and Zemo, donning his famous purple mask, gets in on the fight. But is he on the side of good or not? Can he be trusted? Absolutely not, but at least for now he shows up in a hot new car and they all drive away to safety.

If I’m honest, this episode was probably the weakest of the bunch. It felt a little scattered, the entire trip to Madripoor like a side mission in a video game. But there was still a lot to like here, including the closing moments. While shacked up in Riga, which is where the Flag-Smashers are reported to have been, Bucky suspiciously goes off for a walk alone. What he’s really doing is following a trail of familiar-looking beads, which lead him to an alley way…

“I was wondering when you were going to show up.”

Bucky turns around and comes face-to-face with Ayo, the member of Black Panther’s lethal Dora Milaje played by Florence Kasumba. She’s there to get Zemo, who lets not forget murdered King T’Chaka.

Yeah, that ending was hype, and our first connection to Wakanda and Black Panther since the passing of Chadwick Boseman. Ayo’s appearance could clue us in to what the future holds for that franchise, but also it’s just cool to see her showing up outside of that film.

Overall, this was another enjoyable episode that left me with at least one dangling question. Who is the Power Broker? It’s probably someone we’ve already met, and that likely leaves Sharon or Zemo as the prime suspects. This episode was also pretty damn long, nearly an hour in length, and they cram in a lot during that time. Not all of it was interesting; I’m still indifferent to Karli and attempts to humanize her actions as leader of the Flag-Smashers. But I do like everything we learned about Sharon, and what it could mean about her in the future, and Zemo’s manipulations are priceless.