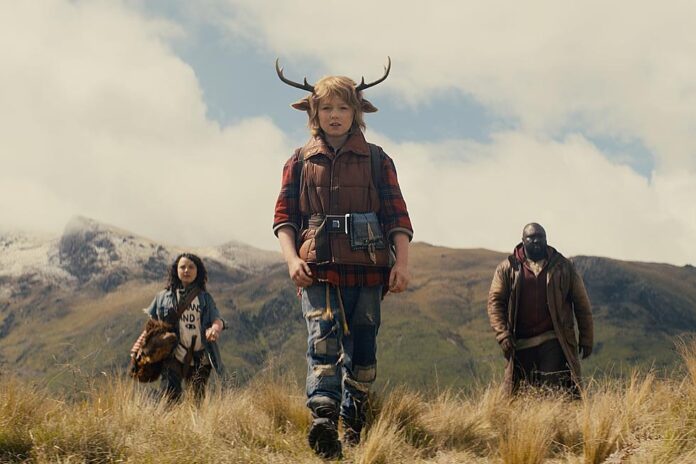 Netflix has made itself a home for adaptations of acclaimed comic books, and they have another with Sweet Tooth. Jeff Lemire’s Vertigo Comics series is a strange mix of Alice in Wonderland, Mad Max, and Bambi, detailing an antlered half-human/half-animal hybrid boy’s journey through a post-apocalyptic wasteland alongside a violent drifter.  And bringing this show is another odd combination, as Robert Downey Jr. produces while Jim Mickle, best known for horror We Are What We Are, thriller Cold in July, and the series Hap & Leonard co-runs the show.

Sweet Tooth stars Christian Convery as Gus, a deer-boy born after the world is ripped apart by a viral outbreak. Upon the death of his caretaker, Gus sets out into the dangerous wasteland to find a new home, joined by Tommy Jeppard (Artemis Fowl‘s Nonso Anozie), a pretty good bodyguard since he’s frickin’ massive and wields a deadly crossbow. Good guy to have around.

Mickle is joined by co-writer and co-showrunner Beth Schwartz.

“We wanted to make a show that offers escape and adventure, where nature is reclaiming the world and in many ways it feels like a fairytale,” said Mickle. “‘Sweet Tooth’ is a new kind of dystopian story, it’s very lush and hopeful. We want people to come into this world where there’s beauty and hope and adventure. This is a sweeping story — we ride on trains, climb mountaintops, run through forests. This is a show about what makes a family, what home really means, and why it’s important to keep faith in humanity.”

Schwartz added, “‘Sweet Tooth’ the series has been in the making since 2016, and the comics existed even well before that, but I think everyone is going to relate to the show and this story even more than we even thought when we first started working on it. When you watch ‘Sweet Tooth,’ you feel hopeful about the future.”

Years after “The Great Crumble” changed everything, a hybrid deer-boy forms an unlikely bond with a wandering loner. Together, they embark on an extraordinary adventure through the lush, dangerous world left behind, searching for the meaning of home.