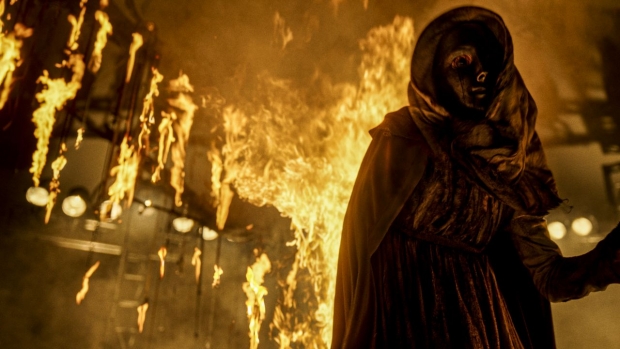 Jeffrey Dean Morgan might want to get himself a traveling priest, because he’s stumbled into another horror film meant to scare the breath out of the devout. The Unholy is a reteaming with Sam Raimi’s Ghost House Pictures, with whom Morgan starred in The Possession years earlier. That film was surprisingly good for an Exorcist knockoff, with a plot that waded into the waters of Jewish myth. But this time Morgan finds himself neck-deep in Catholic symbolism and glimpses of the Virgin Mary. Chances are truly God-fearing will want nothing to do with this movie on this particular weekend, but those of a different disposition will find it satisfying this battle of good and evil and the dark shadow it casts over the faithful.

In a rarity for the genre, The Unholy has a couple of plot lines really working in its favor. Morgan brings his disheveled beard and Negan-like sleaze to the role of Gerry Fenn, a disgraced journalist in the small rural town of Banfield, MA looking for a religious story he can sell for a few bucks. What he finds, instead, is a local deaf-mute girl named Alice (Cricket Brown, a future star), who suddenly enters a trance near a prominent, dead hollow. Suddenly, Alice is able to hear, speak, and heal the sick. She says it was a gift granted to her by the Virgin Mary. She can use these powers only on the most devout, those who pledge their undying faith to Mary, and if there’s even a shadow of a doubt…well, there’ll be some bad mojo.

For Gerry, this offers him a chance to be back in the spotlight again. He not only befriends Alice, but finds himself at the center of this global phenomenon that she has become. What’s interesting about Gerry is that he’s not just a straight scumbag, although he certainly gives that impression. And there’s definitely a side to him that sees this solely for the opportunity it affords him to get back on top. But as a lapsed Christian himself, seeing Alice make a paralyzed boy walk, or witnessing her cure Father Hagen (William Sadler) of his emphysema, offers Gerry another chance; to get right with God. There’s a tug of war going on within him between his personal greed and renewing faith that Morgan conveys extremely well.

Morgan gets upstaged by Cricket Brown, though. The newcomer shows uncommon maturity and the ability to take charge. As Alice, she shows both the awkwardness of your average teenage girl but the wide-eyed vision of someone who has had their connection to the world broadened. But when she’s under Mary’s thrall, Morgan shows Alice to be a fiery, resolute leader. You can see why so many would want to follow, and believe in, someone so young. I think Cricket Brown is going to be something before too long. She and Morgan fare better than their co-stars. Cary Elwes delivers a dubious Boston accent as a shady bishop testing the veracity of Alice’s miracles, while personal favorite Katie Aselton has the most ludicrous role of all as the town doctor who seems to know something about whatever it is the plot needs in the moment.

I’m not going to sit here and pretend The Unholy is amazing. Once you get beyond Gerry and Alice’s inner turmoil it’s slow and pretty rote: statues bleeding from the eyes, a phantasm-like woman shambling in the shadows, quick bursts of evil meant to jolt you from your seat. But there’s very little that’s actually scary, at least not in that way. What does grip you is how easily faith is perverted for causes so common, whether it be the glitz of showbiz or money or politics. All weave their sinister, and very human, tentacles in such a way they supersede the supernatural: the devil has fertile soil with which to ply his trade.

The film marks the directorial debut of longtime franchise writer Evan Spiliotopoulos (Beauty and the Beast, Charlie’s Angels), and he brings those sentiments to a very simple, easy-to-follow brand of PG-13 horror.  He’s not looking to elevate the genre here, but there’s value in his less-is-more mentality. Mary, who is obviously not the Virgin Mary but something else entirely, is scary for what we don’t see of her. Her masked visage makes her resemble a burnt porcelain doll, and is there anything creepier than an evil doll? Well, maybe children. Children are terrifying whether they’re good or bad. The Unholy isn’t out to find new converts, but to maintain the devotion of the genre’s zealots.

The Unholy is in theaters now.