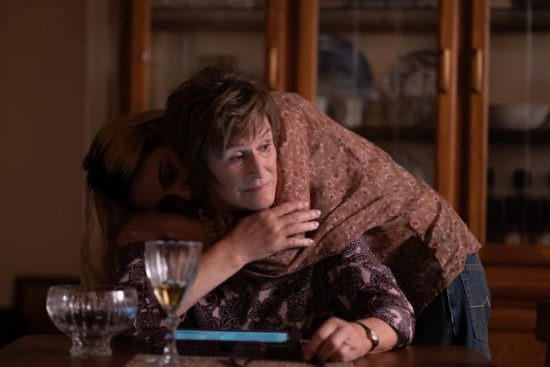 Glenn Close, just recently seen doing “Da Butt” at the Oscars ceremony where she was nominated an eighth time for her performance in Netflix’s opioid drama Hillbilly Elegy, is back in similar territory with Four Good Days. Like that previous effort, this too is based on a true story, captured in a Washington Post article by Pulitzer Prize winner Saslow. The close proximity between the two films doesn’t do it any favors, however, in terms of offering any new insights. However, what it does have are two powerful lead performances by Close and Mila Kunis, the latter as her daughter whose decade-long battle with addiction has left the family in tatters.

Kunis, looking gaunt, frail, and extremely unhealthy with rotted out teeth and sores, plays 31-year-old Molly. In the film’s opening moments, Molly arrives at her mother Deb’s home seeking help. She wants to kick the habit but needs a place to stay so she can do it. Having been through this scenario far too many times, Deb refuses, literally leaving her daughter on the front porch overnight. In those moments we see that Deb has been burned by Molly too often; getting her hopes up that this time will be different, only to have those hopes dashed.

This is a cycle that most movies about addiction grapple with, as well, which is why they can be so repetitive and by-the-book. Credit to Saslow and director Rodrigo Garcia, who previously worked with Close on Albert Nobbs and Nine Lives, that this story keeps a tighter focus to avoid that, while also throwing in a couple of new wrinkles.

It’s clear that, even under the best of circumstances neither Deb or Molly is a saint. Both are combative personalities and we can see them clashing even before the misdiagnosis that hooked Molly on painkillers at an early age. The drugs have only made things worse, and it’s spread to their other relationships. Deb takes out her frustrations with Molly on her husband (Stephen Root), who is supportive but clearly fatigued by the situation. No matter how she’s feeling, the love Deb has for Molly is always present, and being unable to watch her child in such pain, allows her into the home but only to be taken to rehab again, this for the 15th attempt. The doctor says Molly is a perfect candidate for a drug that, when taken in a clean body, will neutralize the effects of getting high and kill the cravings. Since she’s been off the drugs for a little while already, Molly only needs four clean days before she can beat this habit forever. But, if she were to get high and try to take the drug, there would be severe physical consequences.

Four Good Days hits most of the expected, familiar notes of every drug abuse drama. Molly goes through horrible withdrawal, the uncomfortable fevers and chills that accompany it, but also the feeling of being a zoo animal in a cage. She bristles at living under her mother’s roof, and years to get out, a very real danger to her recovery. Furthermore, she has a touchy relationship with her young daughter that needs mending, and an ex (Josh Leonard) who quietly enables Molly’s bad habits. An encounter at a flophouse yields a life-changing secret, but the film doesn’t give it the space it needs to be as meaningful as it should, coming across as a bit of forced drama to make up for conventionality in the script.

Giving Molly something to shoot for, a definable goal, separates Four Good Days from other drug addiction films that go through the same ol’ cycle of rehab and relapse. Every temptation, every quirk in Molly and Deb’s personalities, like the former’s trusting streak, are a potential hurdle to her recovery, and if she fails this time that could be it. Kunis and Close do an outstanding job depicting the high stakes for everyone involved. What would happen to Deb if she were to lose her daughter? Chances are she would never recover, and Close shows the ramped-up anxiety she deals with while that weighs on her mind. A perfect example is a breakfast scene in which Deb chats with another daughter who isn’t hooked on drugs, and she simply doesn’t know how to do anything that isn’t about Molly.

As for Kunis, this is the meatiest role she’s had in ages and she commits to it, not just physically but emotionally. She’s believable as someone who has been so transformed by the years of drugs they no longer recognize themselves, and must now fight to become that person again. But Molly is also imperfect, and besting addiction is tough. Four Good Days makes no bones about how hard this is, and the compromises that might need to be made to accomplish it.

There’s little that the film has to add to any discussion on the opioid crisis, it’s been attacked by pretty much every angle in the last few months. But Four Good Days has remarkably lived-in performances by Kunis and Close that invest us in this sensitive story of self and familial healing.