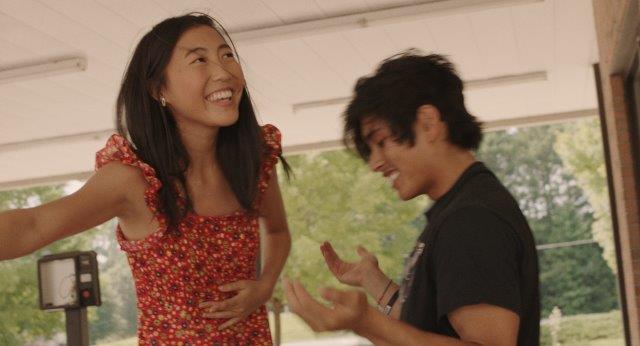 When we think of the current generation in pop culture, we often think of them as either hypersexual drug users (like in such shows like Euphoria), or self-obsessed narcissists (like… everywhere on the Internet, have you seen Tik Tok???). However, like every generation before them, being a teenager is, well being a teenager. You want to be the popular kid, have fun, and meet someone attractive to connect with. Of course, the advent of the internet (and primarily social media) has made being a young teen nowadays even more chaotic. Writer-director Danny Madden tries to capture a little bit of what being a high-schooler in our current age in Beast Beast.

Beast Beast follows the lives of three separate high school kids in a small nameless southern town. The first one that we get to meet is Krista (Shirley Chen). She’s a theater kid who has had the acting bug ever since she was a tiny tot. In her local drama class, they begin class by doing a chant to pep them up for acting “Beast Beast, ready to act,” hence the title. Krista seems like she has her head on her shoulders. As a young teen, she’s incredibly isolated from her parents, to the point that they may have five lines together throughout the film. She explains to her friend that her parents go to bed at 8:00 as she gets ready to sneak out to a party. Most of her passion and her drive are with her acting, but of course, she can be just as angsty as any other teen, especially when she keeps getting hit on by the local douchebag.

Also in Beast Beast is Nico (Jose Angeles). He comes across as a loner who often is skateboarding in his apartment complex. While we never get to see either his mother or father, it’s clear that whoever he lives with (probably some guardian), he doesn’t have a strong relationship with, to the point that we only see Nico talk to the man through a closed door. If you’re seeing a parental alienation problem, then you guessed one of the themes of Beast Beast. Nico does keep himself busy by posting Youtube videos of himself doing some sick skateboarding moves, which catches the attention of Krista and her friends. Nico meets a guy in his apartment complex and they strike up a friendship. The friend like partying, drinking, smoking weed, and robbing stores after hours, so of course, Nico starts to pick up that habit as well.

Nico and Kristen’s paths collide a little early in Beast Beast as they are both at a local house party. While they are doing the usual friendly flirting, when the cops arrive to break up the party, the douchebag she keeps trying to get away from tries to assault her. Nico pretty much dons his Superman cape and comes to save her. After the cops arrest him for beating up the guy, he’s now her knight in shining armor and the pair start to have a courtship.

The third person that Beast Beast follows is Adam (Will Madden). Adam is not in high school, but a recent graduate who is a little aimless in what he wants to do for the next stage of his life. He is a super gun nut, so he decides to become a YouTube personality and have a channel about his love of guns. And he’s got A LOT of guns. If his demeanor didn’t scream “school shooter” when you first meet him, the film hammers that idea down a lot through the numerous videos he makes. By the way, Beast Beast also shows a little bit into the “content creator” side of social media and what goes into trying to become an “influencer” of some sort. Adam thinks he has what it takes to become a big YouTube celebrity for his gun vlog, and he’s pretty good with videos and editing. Of course, he’s not prepared for “the comments,” which feeds his rage.  He and Kristin are next-door neighbors and both participated in acting when they were young, but now he’s turning towards guns, and like, religiously. To the point that his parents are worried about him. The difference between Adam and the other two is that he has active parents, he just doesn’t care for their love and prefers isolation.

Towards the end of Beast Beast, there’s a predictable turn where the three collide in a not so pleasant way. While it may come across as a little preachy, but then there’s a twist to the twist that actually in interesting and creative. It’s something that is incredibly subtle, but rewards the viewer for paying attention to the film. While the twist is predictable (as is most of the plot), the filmmaking style is very good. It comes across as a documentary style of filmmaking that makes you at first wonder if this is real and not a made-up drama.

The other big plus for Beast Beast is the performances, especially by Shirley Chen as Krista who is the heart of the film. Both Adam and Nito have moments of goodness, they are both morally gray characters but Krista is truly a nice and wonderful person who just wants the best in everyone. All three of the main performances are acted well by the cast. The only real criticism is that while the nameless town is billed as “Southern,” nothing really jumps out that this is a story told in the south, except that Adam is a gun nut. This story could have been told in any Small-Town America location without trying to scream out loud that it’s in the South. Overall Beast Beast is a good tale of interconnectedness, loneliness, and being a young teen in our current age.