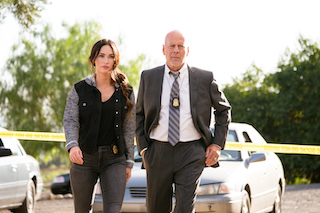 Bruce Willis has crossed paths with just about every star under the sun, but for the upcoming crime thriller Midnight in the Switchgrass he teams up with Megan Fox for the first time. Oh, and she’s bringing along her real-life boyfriend Colson Baker aka Machine Gun Kelly.

Lionsgate has dropped the first images from Midnight in the Switchgrass, a serial killer film in which Willis and Fox play federal agents on the hunt for a murderer who stalks women. Also in the cast are Emile Hirsch, Lukas Haas, Sistine Stallone, Michael Beach, Caitlin Carmichael, Jackie Cruz, and Alec Monopoly.

Interestingly, the film is directed by Randall Emmett, a big-time producer as part of Emmett/Furla/Oasis Films. This marks his feature directing debut, after helping to back many of Willis’ projects over the years.

Midnight in the Switchgrass opens this July.

Bruce Willis (Glass) and Megan Fox (Transformers: Revenge Of The Fallen) star in this gritty and intense crime thriller. While in Florida on another case, FBI agents Helter (Willis) and Lombardi (Fox) cross paths with state cop Crawford (Emile Hirsch, Once Upon A Time… In Hollywood), who’s investigating a string of female murders that appear to be related. But when Lombardi herself is kidnapped, it’s a race against time before she becomes the serial killer’s next victim. Also stars Colson “Machine Gun Kelly” Baker (The Dirt) and Lukas Haas (Inception).