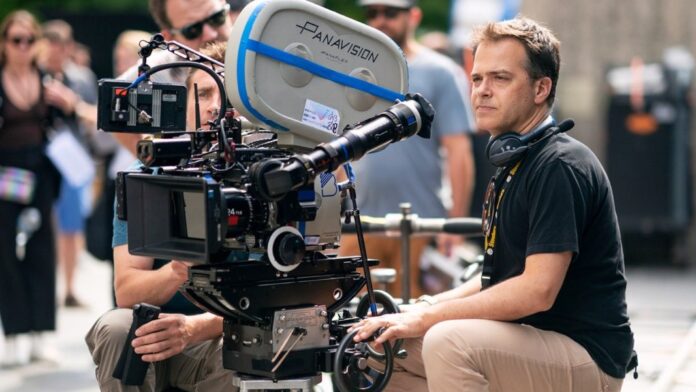 There’s that D.C. saying that everybody moves here and that no one is really from here. Well one notable exception to that rule is cinematographer Matt Jensen. From going to movies on Wisconsin Avenue to taking advantage of the Smithsonian filmmaking camps, Jensen’s future film success is rooted in our capital city.

After high school, Jensen graduated from the University of Southern California and worked on independent and short films in-between working on shows like N3mbers, CSI, and True Blood. Eventually he gained the attention of Game of Throne’s production team, shooting four episodes of the hit show. His work on 2013’s Filth caught the eye of director Patty Jenkins who was gearing up to shoot the first Wonder Woman film. Since then, he reteamed with Jenkins on the Black Dahlia miniseries I Am The Night and Wonder Woman 1984.

Having grown up in the area in the 80s and with Washington D.C. being a major part of the film, Jensen was the perfect person to shoot Wonder Woman 1984. I had the opportunity to chat with Jensen about his earliest filmmaking memories, filming in Landmark Mall, and recreating a beloved D.C. shop.

Matt, you’re from DC, I’m from DC. You actually first discovered your passion for filmmaking through taking classes here at the Smithsonian Institute as a child. Talk to me a bit about that experience. What was that like starting out here.

Matt Jensen: I think I can pinpoint the moment I started loving movies. I saw Raiders of the Lost Ark at the K-B Studio on Wisconsin Avenue. I remember I waited in a block-long line and it was a hot day in May or June of 1981 and I was young. I was a kid and that was just a huge auditorium and you would walk on street level and then go down into the theater. It was in 70 millimeter and it was a packed audience. I think not only did I love the movie, but the experience of watching it was so transformative and the crowd was really into it and laughing and, and cheering. It just was such an overwhelming experience for me, that I really got interested in the power that a movie can hold over a collective audience like that. As I got interested, my mom was a member of this Smithsonian associates program and they had the Young Associates Program where they offered classes for kids in filmmaking. So I signed up and took several over the course of four or five years and they were all amazing and interesting classes. We made stop motion animation, you science fiction movies…

You made one about time travel, right?

MJ: Yes! We did. I think that was the last class I took.I think I was 14 or 15 at the time. It was a summer camp and we would spend time, not only learning about performance and doing kind of acting classes, but we also were learning about film and how to understand how each shot propels the narrative forward. Then the last two weeks of the class, we all made this movie together. It was fantastic and a great learning experience for me, but also gave me the confidence to know that maybe I could do this in film school and maybe beyond. I didn’t think much beyond film school and college really, but those early experiences certainly laid the foundation for what I do now.

What was it like coming back? You’ve made a career for yourself working with James McAvoy, on Game of Thrones and the first Wonder Woman film, and now you’re filming in the Smithsonian Institute on Wonder Woman 1984. I imagine that was kind of like a full circle moment for you.

MJ: Absolutely. It was an incredibly emotional time for me when I was back there. You know, I took classes in the basement of the Natural History Museum, which was great. It was sort of behind all these doors that had access to all these classrooms. Then cut to 2018 and I’m lighting the rotunda of the Natural History Museum early in the morning. You know, I’m shooting Kristen Wiig on her way to work. And I thought, “Who gets to do this?” I almost wish that, as an adult, I could sort of reach back in time and tell my 12 year old self that everything was going to be okay and that “you are going to get to do what you love doing.” That would have been amazing. But to sort of realize that, at the time, was huge.

Talk to me a little bit about pre-production and location scouting. Obviously you’re a DC native. How did you, your team and Patty Jenkins decide which parts of DC you wanted to feature?

MJ: Well, Patty had grown up in DC or had spent some time in DC as well. I think she was here in her late teens and early twenties, so she knew DC and she had a very distinct idea of what pockets of DC she wanted to shoot. We were looking for the sort of iconic buildings on the National Mall and wanting to go to the Hirshhorn – the Hirshhorn was really Patty’s idea – and the Natural History Museum and also the Air & Space. All these things were woven into the script because of what Diana and Barbara do, so the locations were kind of natural to the characters.

Then we had very good local location people who were instrumental in showing us pockets that maybe we had overlooked. I think it was one of our location people and Patty that kind of had the same idea at the exact moment to bring back Commander Salamander (a popular 80s punk rock boutique in Georgetown that closed in 2010). I remember we were walking up Wisconsin Avenue at night scouting and they said “What do you think about Commander Salamander?” And my eyes just bugged out of my head. I was like, “We got to do it! We gotta do it! We absolutely have to do it.” You know, it was stuff like that. There were a lot of people involved in making those decisions and we have an amazing production designer (Aline Bonetto, Amélie) who’s French and then the whole art department was from England. So they were seeing DC with new eyes and they were very struck by the architecture and how the city works and how beautiful it was. They offered some insight to what was striking to them visually.

Landmark Mall in Alexandria, Va is heavily featured in Wonder Woman, 1984. Did you frequent there much as a kid and talk me through the process of filming that action scene there?

MJ: Ironically, I didn’t ever go to Landmark. I used to go to Springfield mall, Beacon mall and Tyson’s corner, that sort of thing. So Landmark was one that I never frequented, but what it did [for the film], because it was closed, it offered us full control. The ability to bring back all these periods stores on three levels and give us this sense of scale and scope. It provided us just full access because we knew we were doing a big stunt and action sequence. We needed a lot of infrastructure in order to pull that off. At one point the producers were like, “Maybe we should look at a mall back in England, because we shot the rest of the movie in London. And we looked at one mall and Patty kind of looked around and went, “Nope, there’s no way.”

Is there a big difference between English malls and American malls?

MJ: Oh yeah. Oh yeah. They do not have the scale and the scope that our malls do and particularly those malls that were built at that time [the 80s]. So Patty won that fight and we had a great time recreating that whole place.

I think it surprises people to know that DC, along with being the politics hub of the nation, has quite the art scene. Dave Grohl is from this area and obviously Dave Chappelle and Patton Oswalt, and now you – so many other notable People from this area. DC also has a very, very rich film history from The Exorcist steps in Georgetown. All the president’s Men and Forrest Gump and many political dramas were filmed here as well. Besides Wonder Woman 1984, what is your favorite film depiction of DC?

MJ: There are so many really. All The President’s Men, of course. It’s such a brilliant movie. The Exorcist steps of course, and The Exorcist has special meaning to me because I went to a Catholic middle school right across the street from those steps. From fifth through eighth grade, I walked by those steps being terrified of them for years. Of course I love D.C. Cab! St. Elmo’s Fire kind of holds a special place in my heart because of some of the locations. Although I was always upset that they all went to Georgetown in the movie, but they shot Georgetown at the University of Maryland. So that was always weird. Oddly enough, there’s one point where Ally Sheedy is outside of an antique furniture store and where that location was is right off of Wisconsin. And it’s kind of in the exact area, the exact place where we shot Diana having her dinner alone in Georgetown. [St.Elmo’s Fire] happened to be trending on Twitter the day that we were shooting. So I have a bizarre connection we didn’t know and to think that we were there at the same, at the same place so many years later! It was great.

Wonder Woman 1984 is still playing in select theaters and available for digital download and DVD purchase.