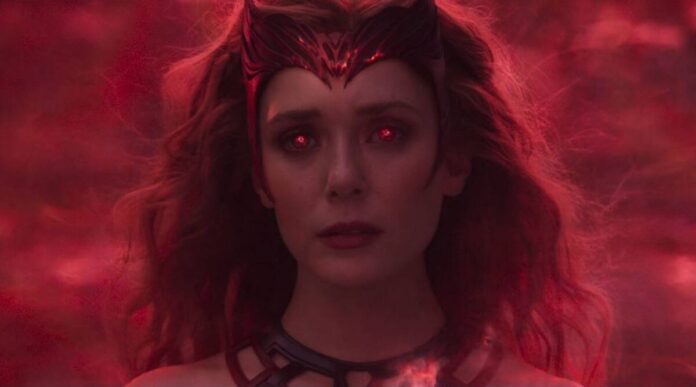 Man, it feels like only yesterday I was reviewing the first three WandaVision episodes and complaining that it was too slow and leaned too hard on sitcom tropes rather than pushing forward a story.

I was an impatient idiot, who forgot to trust in Marvel.

WandaVision grew leaps and bounds from that point, bringing in wider elements of the MCU, introducing new characters like Monica Rambeau (Teyonah Parris), reintroducing some old friends like Darcy (Kat Dennings) and Jimmy Woo (Randall Park), while exploring grief in an It’s A Wonderful Life kind of way. All this, and it gave us one potentially great new villain in Kathryn Hahn’s Agatha Harkness. Although…perhaps she’ll be less of a villain now?

Episode 9 of WandaVision wraps up the first (only?) season, and whereas last week was basically an information dump, this one is all about big emotions and big magical action scenes. Both director Matt Shakman and star Paul Bettany lowered expectations (The word “disappointed” has been thrown around a lot), and perhaps some will be. There is no gigantic, mind-blowing cameo to speak of, that’s true. There is no Internet-breaking reveal. However, it does a good job of tying up this traumatic and weird chapter for Wanda (Elizabeth Olsen), while setting up what we know the rest of Marvel’s Phase 4 is going to be all about.

Picking up right where things left off, it’s a pitched battle of witches all across the town of Westview. Wanda’s novice abilities are made up for by raw power, and she gets the upper hand on Agatha by using things around her as weapons, like a car that she slams into Agatha’s face. But Agatha has the skills to match Wanda’s strength. She reveals that Wanda has an entire chapter written on her in the Darkhold, which is an evil book of magic. Meanwhile, the arrival of the emotionless white version of Vision (Paul Bettany) that we saw last episode arrives and nearly kills Wanda until her Vision arrives to even the scales.

There’s just one problem. Wanda’s version of Vision isn’t a flesh-and-blood creation, but the one rebuild on the outside definitely is. This becomes a recurring problem as Agatha releases the people of Westview from Wanda’s thrall, with the citizens pleading to either be set free or to have their loved ones allowed into the sitcom. Others would rather be dead than trapped in Wanda’s screwed-up version of reality.  Anguished at the torture she’s put these people through, Wanda begins to lift the veil so they can escape, only to realize that would mean the end of Vision and her two children, Billy and Tommy. Instead, Wanda gives in and keeps the hex as it is. Some hero!

Meanwhile, another mystery gets wrapped up by shooting down any hope that Evan Peters would be sticking around as Quicksilver. He’s basically keeping Monica captive in his room, using his speed powers to hold her at baby. But in a quiet moment she discovers that he’s not Pietro Maximoff at all, just some slacker dude with a really stupid name. She gets the upperhand on him and jets off, using her cool new powers. Those same abilities come in handy when she shows up just in time to save Billy and Tommy from S.W.O.R.D. Director Hayward (Josh Stamberg)  and the military, who have finally breached the hex. He then has his truck slammed into by Darcy in the old ice cream truck from last week. I’m guessing if Hayward were Ultron, as I predicted, he might’ve done something about that.

Speaking of Ultron, what had been a battle of laser beams and molecular warping between Visions has now become a philosophical debate about Greek mythology. Specifically, it’s about Theseus’ ship and whether it can be considered the same if all of the planks were removed and reassembled into something new. This thought perplexes the new Vision, who decides that his imperative to kill Vision doesn’t hold up considering all that has happened. Well, that’s convenient.

The showdown between Wanda and Agatha gets ramped up now that all of the other chess pieces are off the board. Wanda tries her confusing mental tricks, the same ones she used to fuck up the team in Avengers: Age of Ultron, but they backfire when used on Agatha. The evil witch keeps absorbing all of Wanda’s chaos powers, soaring high into the air as the Avenger fires off one magical blast after another. While we think she’s trying to take down Agatha, what Wanda is really doing is setting up runes all across the sky.

What was that Agatha said last week about runes? Oh yeah. Within a certain space only the one who created the runes can use their powers. After all of this time, all along Agatha was just a common supervillain who gives away the tools of her own defeat.

From here, Wanda fully embraces her power as the Scarlet Witch, donning the familiar headdress with a modified costume. Rather than destroying Agatha, she simply rewrites her back into nosy neighbor Agnes, to exist in Westview as a nuisance forever. But before she does it, Agatha has a warning. Wanda doesn’t know anything about her powers, and someday she will need Agatha’s help.

Vision and Wanda return home with Billy and Tommy, the hex unraveling behind them. After putting the boys to bed one last time, Wanda reveals the truth to Vision, that he is borne from a small piece of the Mind Stone that resides within her. That he is made of her sadness, hope, and mostly of love. They share one last kiss before he vanishes, and the rest of Westview returns to its natural state, albeit with a lot of devastation in Wanda’s wake.

The final moments are a bit corny and overwrought, but I doubt it’ll bother anybody. It’s funny that Wanda and Vision were such a poorly-developed couple before this series, and for the entirety of it they’ve spent in a completely fictional existence. But now as WandaVision closes I’m so invested in them that all I wanted was for them to have their “Happily Ever After” moment. I expect some fans will find what they get to be bittersweet at best.

This episode leaned heavily on The Wizard of Oz as a visual and thematic cue. During the fight with Agatha, the evil witch is hit by a car and smashed into the side of a house, leaving only her feet sticking out from underneath.  Playing in the Westview movie theater, as always, is Oz the Great and Powerful, which deals with false realities and a power that exists behind the curtain.

So while there may be some disappointment by those who were expecting an earth-shattering conclusion, Marvel has you covered with two credits sequences setting up future stories.

The first involves Monica Rambeau, who after reconnecting with Jimmy and learning that Darcy has fled, is told by an agent that she is wanted in the Westview movie theater.  When Monica arrives, the agent reveals herself to be a Skrull, and there representing an old friend of her mother’s, who would very much like to meet her. When Monica asks “Where?”, the agent simply points up to the sky.

Clearly, this is a Nick Fury reference and could indicate Monica will be part of the Secret Invasion series with Samuel L. Jackson and Ben Mendelsohn as Talos. I’m all for this. Sign me up now, please.

The other scene is a little more confusing, but will probably have greater implications. We find Wanda off in a remote cabin, not unlike the one Thanos retired to after Avengers: Endgame. While it looks as if she’s quietly taken herself off the grid, we see that it’s all just a cover. Wanda is actually inside researching the Darkhold, and before the scene ends we hear the cries of Billy and Tommy.

Is Wanda researching a way to bring back her children? Something tells me this is exactly what she will be doing in Doctor Strange in the Multiverse of Madness. And if Wanda still has the Mind Stone within her, as she said earlier in the episode, she can almost do anything in conjunction with her chaos magic.

Overall, I stand by what I’ve said before, that WandaVision is the most creatively ambitious project Marvel Studios has undertaken. If nothing more, it has set an incredibly high bar for the rest of their Disney+ programming, and if there’s any “disappointment” to be found it’ll be if/when Falcon and the Winter Soldier is just a fun action series with no higher aims. Even if it is, I’ve learned my lesson. Trust in Marvel. They haven’t steered us wrong yet.