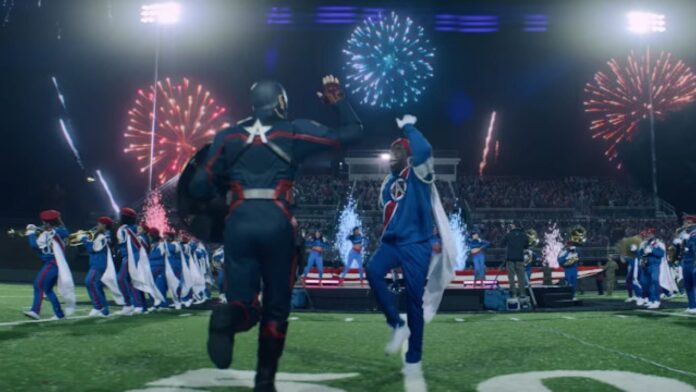 If the memes birthed from last week’s reveal of the new Captain America, John Walker (Wyatt Russell) are anything to go by, fans do not like this new guy carrying the shield. So you can only imagine how he’ll clash with the guys we think SHOULD be carrying it. Episode two of Falcon and the Winter Soldier gives us the oil and water dynamic between the three patriotic heroes we were hoping for, alon with the buddy comedy component that was missing in the somber premiere.

But at first, you might find yourself liking the new guy a little bit. Or at least respecting his come-up to the big leagues. He actually seems like a decent dude! We’re introduced to him this episode in quiet fashion, thinking over the decisions that have led him to be the new Captain America. An ex-football star and elite soldier who rates off-the-charts in physical and athletic ability (he wields the shield like Cap himself), Walker comes across like an ordinary guy who just wants to do right by Steve Rogers and his country. He’s not at all like the a-hole USAgent we know from the comics, although something tells me a few episodes of disrespect will bring that out of him.

Because sure enough, disrespect is about all he gets. Not from the American people, mind you; they seem to love having anybody back in the costume. But when it comes to Sam “Falcon” Wilson (Anthony Mackie) and Bucky Barnes (Sebastian Stan), they ain’t having it. Sure, Walker can parade around and shake hands with folks, sign autographs, take selfies, do commercials (it’s eerily remisicient of The First Avenger’s depiction of Captain America as a marketing tool), but he’ll never be the hero Steve Rogers was.

This episode is largely about drawing contrasts and similarities between John Walker and Steve Rogers. Both appear to be humble, salt-of-the-earth types who just want to “get the job done”. But as Walker’s pal and sidekick Lemar Hoskins aka Battlestar (Cle Bennett) tells him, all of this glad-handing IS part of the job now. “You can’t just punch your way out of problems”, he says, which is pretty much a lesson Rogers had to learn himself.

The major difference between Walker and Rogers, at least that I see, is arrogance. Walker has always been treated like he is gifted, whether it was on the football field or in the military, so now that he’s got actual power there’s a good chance he will abuse it. Whereas Rogers was a puny pipsqueak who was bullied all of his life, and never had the power to make the kind of difference in the world that he wanted. When he gained strength, courtesy of the Super Soldier serum, he never took it for granted because he had known weakness. Isn’t this, essentially, what Dr. Erskine (Stanley Tucci in The First Avenger) said when he chose Rogers in the first place?

We finally get to see Sam and Bucky team-up, but no, they aren’t happy to see one another. Bucky has been watching this new Captain America and he’s not happy. He won’t get off Sam’s back for giving up the shield. The two can barely stand to be around one another, but Bucky invites himself to be part of an operation to investigate the terrorist Flag-Smashers. This observatory mission goes bellyup, though, when they end up overwhelmed by the group, who appear to be pumped up on Super Soldier serum.  It’s a pretty one-sided beatdown until who should come swooping in to the rescue but the new Captain America and Battlestar. How Goddamn embarrassing can it get? The Flag-Smashers get away, Cap invites Sam to be his “wingman” just like he was for Rogers, and it’s that last arrogant crack that both hints at Walker’s arrogance but also drives a wedge with Sam.

This idea of giving power to those who never had it is a theme that carries through into what I think is the most consequential addition to the MCU yet. Picking up on another lead, Bucky takes Sam to Baltimore, MD and the home of…Isaiah Bradley, known to Marvel Comics fans as the “black Captain America.” Introduced in the seminal Truth: Red, White & Blue series, Bradley was part of the government’s attempt to recreate the Super Soldier serum by experimenting on Blacks.  Bradley was one of the few who survived, donned a costume, and operated as a hero for years. However, the price he paid for that was mistreatment by the U.S., being captured and tortured by Nazis, and then mental illness caused by the serum itself.

Here in the MCU, Bradley is played by the great characte actor Carl Lumbly, and much of that story remains. However, Bradley isn’t childlike here; he’s old and angry at the mistreatment he suffered by a government that imprisoned, poked, and prodded him for years despite his service to the country. Suffice it to say, he’s not offering Bucky and Sam any of his help. The knowledge of Bradley’s existence, though, shakes Sam up and seems to back-up his feelings as to why he never took Cap’s shield. If this is the way our government will treat someone like Isaiah, what would they do to him?

As if to drive that point home further, Sam is then racially profiled by a couple of Baltimore’s finest. Oops. It’s Bucky who gets arrested, though, only to be set free by…guess who, John Walker. The quartet of star-spangled men (The episode is actually titled “Star-Spangled Man”) still can’t get along, though, and after an impromptu therapy session they go their separate ways.

“Word of advice, then… stay the hell out of my way,” Walker says with…is that an evil smirk on his face? Kinda looks like it.

For Sam and Bucky, next is a visit to Baron Zemo (Daniel Bruhl), who might know something about where these Super Soldiers are coming from.

This is one of my favorite hours of Marvel television, I think. Not only does it combine some great fisticuffs action between the heroes and the Flag-Smashers, but I love the way they’re weaving Sam’s, and now Isaiah’s, experiences as Black superheroes. Their stories should not be like that of other MCU characters, and I’m happy to see that point being made here so well.

We also get some great squabbling between Sam and Bucky. Their conversation about the “Big Three”, which are the Androids, Aliens, and Wizards they always face is damn hilarious. Even better is their mutual dislike for this new Captain America, no matter how earnest he may be.

A couple of things that seem small now but are sure to be big later:  the Flag-Smashers are on the run from the Power Brokers, who in Marvel Comics are an organization that gives superhuman abilities to anyone who can pay for it. So we have an idea who has given them their powers.

Also, fans will want to note the brief appearance of Elijah Richardson as Eli Bradley, Isaiah’s grandson and the future Young Avenger known as Patriot. This definitely won’t be the last we see of him.

I’m hoping future episodes will reintroduce some plot threads from the first episode. I need to see how Sam’s financial woes tie-in to this, for one thing. I hope that wasn’t dropped for good. And what about Bucky’s attempts to have a normal life? Does he still care about that? The promise of Baron Zemo is pretty exciting, though, as well as the return of Emily VanCamp as Sharon Carter, another who was very close to Steve Rogers. I feel like all of this leading to a cameo by Chris Evans, and perhaps that’s what Marvel wants us to think. I’m down for the ride, either way.