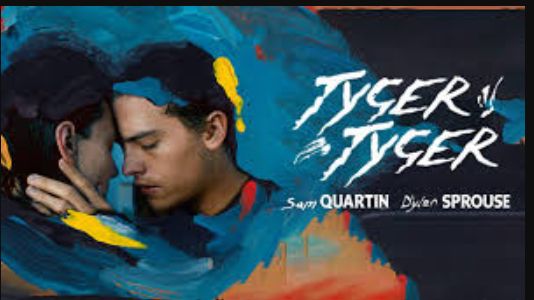 COVID-19 hasn’t even slowed and already we’ve had a handful of pandemic films of varying quality, but we haven’t had THE pandemic movie yet. It’s really not fair for me to put Tyger Tyger in that group, yes it does have a devastating pandemic at the heart of it’s story but the film was made in 2019, so it’s not exactly relevant to our current situation. 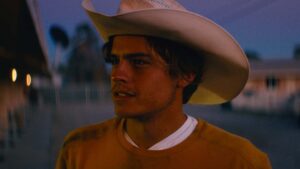 Kerry Mondragon’s film about a near-future, almost post-apocalyptic hellscape ravaged by disease felt like it had a ton to say but got distracted by all the pretty pictures. Imagine if COVID decimated the population and a group of people had to steal medicine and deliver it to an outpost, but to do so they had to cross through Burning Man first. That is the best way I can describe Tyger Tyger. Blake (Sam Quartin) and Bobby (Nekhebet Kum Juch) are tasked with robbing a pharmacy and delivering their score to “Free City”, the film opens on the robbery in a Sherman Oaks pharmacy after which they nab Blake’s love, Luke (Dylan Sprouse) to take him along for the ride. Of course, Luke’s not exactly onboard for the joy ride due to his crippling heroin addiction and is forced to go cold turkey after the duo destroy his stash and throw him in the back seat. The trio journey’s through a fever dream of characters and events while crossing the desert to Free City. 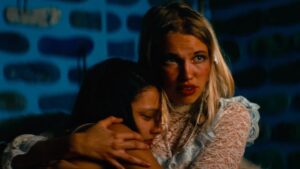 There is something very Avant Garde about this film, which may be why I simply did not get it. It remains unclear to me whether each group of odd folks met on the journey were supposed to represent something, or not. The whole thing felt like Fear and Loathing In Las Vegas with less humor and no clear direction for the story to go. The real let down was the abandonment of themes that would have really hit home in a world where pharmaceutical companies are applying a 3000% profit margin to a world-saving vaccine (that’s our world, to be clear), and how the oppressed will always band together to rise up and fight the power to save each other. Nope, instead it’s a road trip movie on acid. We never even get to see “Free City”, instead the story quickly becomes a showcase for the odd characters and the mission to deliver life-saving (presumably time sensitive) medication takes a back seat.

While the story was a big miss for me, I will say that Kerry Mondragon definitely has an eye for striking visuals. While the use of the California desert does not produce anything ground-breaking the film knows how to combine visuals with color palettes to deliver something that will keep your eyes entertained. I can’t say that this will be a worthwhile purchase for most, but if your more concerned about something pretty then something that makes sense I’m sure Tyger Tyger will be available on Prime Video or another free service sooner rather then later, if you really want to see for yourself it’s a low-cost purchase, currently available for $7.99 from Prime.