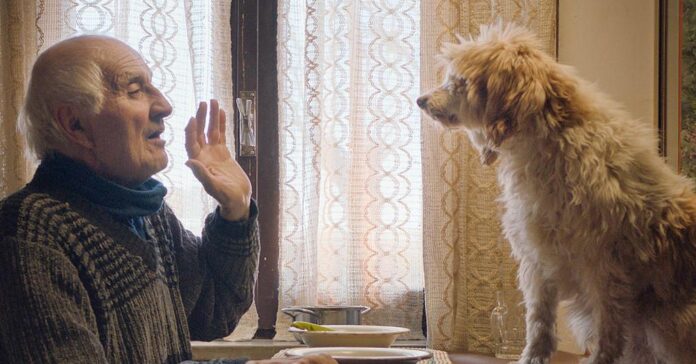 As someone who’s not necessarily a “foodie,” truffles are not on my radar for the most part (other than the occasional chocolate truffle one may get for their significant other). However, truffles turn out to be a delicacy, and like with anything that we love to consume, there’s an industry that caters to that need. Sony Pictures Classics and directors Michael Dweck and Gregory Kershaw explore the truffle industry through the ground-level eyes of the people in the woods searching for the rare fungus in The Truffle Hunters.

Right off the top, one interesting aspect of The Truffle Hunters is that the documentary while beautifully shot, kind of just drops us into a new and unique world devoid of music, archival footage, or a narrative overview complete with a voiceover. Instead, The Truffle Hunters drop us in the middle of a village in Northern Italy and follow a variety of different people within the truffle-hunting industry. All of the subjects of the documentary are gentlemen in their twilight years, who absolutely love searching the woods (mostly at nighttime to the annoyance of their spouses) to collect truffles to then sell.

At first, The Truffle Hunters seems like it may expose the exploitive nature of these old men using their canine companions as beasts of burden to sniff out the truffles and are able to then sell it and keep the cash for themselves. However, it instead showcases that these dogs truly are these guys’ partners who they love dearly. Anyone who is a dog lover will absolutely love the care and dedication these men have to their best friends. There’s even a point where one of the subjects says he has no need for a girlfriend or a wife and long as he has his dog to keep him company. The Truffle Hunters show us once again how symbiotic man and dog truly are: as these men absolutely love their dogs.

While the men and their dogs are the chief subjects of The Truffle Hunters, it also touches the industry themselves. The fact remains, truffles are worth a lot of money. There are countless scenes in the documentary where there are literally underground truffle purchases in shady-lit street corners. There are also moments where different people are hunting on another person’s “territory” as well. It almost seems as though people are dealing drugs, instead of them selling rare delicacies. And with it being a lucrative industry, there’s always a rich guy in an expensive suit that ultimately is raking in the dough. If anything, the exploitive nature of the documentary is how the businessmen use these older gentlemen’s hard labor to enrich themselves. While the older fellas in the trenches seem to be making good enough money, they aren’t the ones who in turn sell the product to presidents, executives, and corporations overseas.

Speaking of the subjects of The Truffle Hunters, they are a unique bunch, full of interesting qualities that make them entertaining to watch. One can’t help but hold their breath while one guy is giving his dog a bath and uses a hairdryer while in the tub, knowing one slip would electrocute him and his canine pal. Another guy constantly makes his wife nervous as he’s getting too old to go out at night looking for truffles alone. She constantly is screaming his name out at night looking for him, even though he promised he wouldn’t go out at night anymore. And there’s one person who’s just fed up with the industry and does nothing but drink, smoke, curse, and complain about everything. He proves to be the liveliest of the bunch. Towards the end of the film, one of the hunters’ dogs dies after ingesting a poisonous plant, and you can see his pain bleed out on the screen as once again, The Truffle Hunters is a documentary about guys and their dogs.

If you aren’t a fan of truffles, or they are out of your price range, it doesn’t matter. The Truffle Hunters is an incredible documentary really about men who should be living in retirement, but have too much passion to quit what they love doing, and their love of their dogs who they are doing it with. It helps give a perspective for you when you go and buy your food the amount of love, care, and sacrifice that goes to your food enjoyment.

The Truffle Hunters is currently available in New York and Los Angeles.