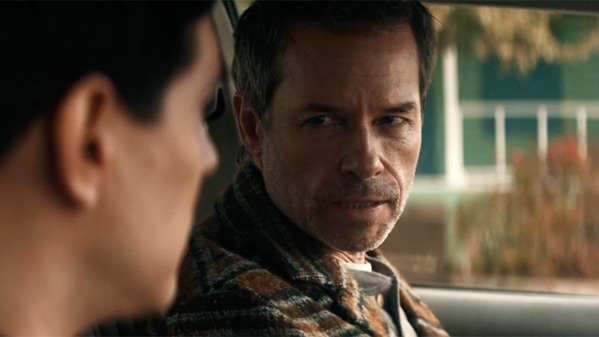 The Seventh Day chronicles those in the fight between good and evil that has been raging behind the scenes for centuries. Unbeknownst to the average person, demonic possessions have been rampant and on the rise. The Catholic church has tried to distance themselves from this sect of the religion. Under the Vatican’s orders, the rites of exorcism will no longer be taught. The problem is – the demons didn’t get the message. Good thing a small number of brave priests like Father Peter (Guy Pearce) have continued the practice under the radar. Peter is part of a clandestine group that has ignored the Vatican’s directives and continued studying, training, and preforming exorcisms. 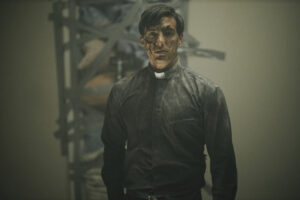 A promising new priest straight from the academy – Father Daniel (Vadhir Derbez) – wants to contribute to the cause. He excelled in his studies and the archbishop believes he can be a real asset to the team. He has asked Peter to train Daniel, showing him the ropes and imparting his wisdom. Decades earlier, Peter’s own mentor Father Louis (Keith David) met an untimely end. Since then Peter was thrown into a prominent exorcist role before he felt truly prepared. Peter knows what it takes and what horrors lie ahead of Daniel. He knows that true experience and not classroom study is what matters in the real world when dealing with possessions. He instills that idea in Daniel from the jump and immediately pushes him out of his comfort zone. As they dive deeper into Daniel’s training, the stakes and dangers only amplify even more.

The Seventh Day is a hybrid of Training Day and The Exorcist. Unfortunately, it is a poor man’s version of both films individually and that doesn’t change when mixed together. However, the Training Day aspect is much stronger than the horror. Pearce’s performance is the highlight of the film and that is on full display in the first half. As Pearce is training Derbez he delivers quick and witty lines perfectly. He is certainly arrogant and rough around the edges – making for the perfect bad boy priest that toes the line. Father Peter curses, smokes cigarettes, and mocks the church’s trainings – which Pearce knocks out of the park. The issues arise as we start to get away from the interactions between the two priests and into the “horror” aspect of the film. 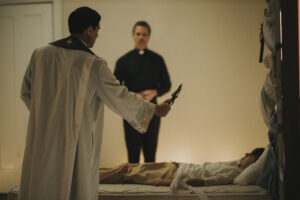 The first and second half of The Seventh Day are entirely different. Not to mention by the end of the film it is spiraling out of control into nonsense. The Seventh Day is lacking on originality and scares which is not a good sign for a horror film. There are a few jump scares, but only one or two images that truly stand out. Even worse than that is twists that can be seen a mile away. I give writer/director Justin P. Lange credit for trying to keep the audience guessing even if it didn’t hit. Not only are the scares basically nonexistent – some of the ones we see look so fake they ruin the atmosphere. The Seventh Day cannot capitalize on it’s solid start and Pearce’s performance relegating it to another forgettable possession film that lacks true scares.