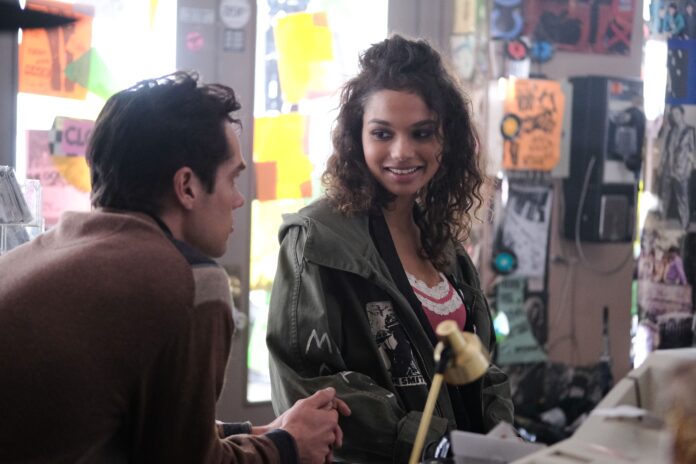 The influence of music varies from person to person. Whether it be that one song that touches you or a group/artist you can’t get out of your head. For Cleo (Helena Howard) that connection was with The Smiths in Shoplifters of the World. Yup The Smiths – the English rock band out of Manchester who rose to fame in the early to mid-80s. Although the band had a short shelf life, only about 5 years, they had a devoted following. It was this following that felt the shock in 1987 when The Smiths abruptly broke up.

Cleo was just aimlessly floating through life in Denver on that fateful day in the late 80s. Her home life wasn’t the best, many of her friends had gone off to college, and she seemed to be stuck. Working at a grocery store, avoiding college at any level, and dreaming of her fake French boyfriend to save her. At least she had the music of The Smith’s to escape to. Their lyrics and sound resonated with her and perfectly described her teenage angst. Until the soul crushing news came out that is. 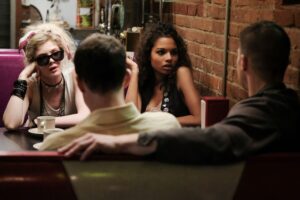 Cleo’s friends Sheila (Elena Kampouris) and Patrick (James Bloor) happened to be back in town. Sheila and Patrick have been dating since middle school, but their relationship is at a crossroads. Sheila is incredibly sexually frustrated as Patrick doesn’t like sex and Patrick is unsure of his sexuality. The last member of the group – Billy (Nick Krause) – is madly in love with Cleo and leaving for the army the next day. They all got back together to send Billy off in style with a romp through their old stomping ground. That might just be what the doctor ordered to ease the pain of The Smiths breakup as well.

On the other side of town Dean (Ellar Coltrane), who also is in love with Cleo, has other plans. Dean works at the local record store and has a more optimistic take on The Smiths breakup. He wants to celebrate all the music they were able to get from the band, not harp on no more coming. In an effort to impress Cleo and leave his mark, Dean has decided on a more dramatic approach. He wants to share The Smiths music and send a message. Dean heads to a local Metal radio station and forces DJ Full Metal Mickey (Joe Manganiello) to play The Smiths all night at gunpoint. 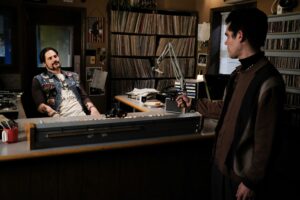 Shoplifters of the World is “based on true intentions.” There is an urban myth that Dean’s plan in the film was actually conceived and almost carried out in Denver in the late 80s. The person ended up chickening out and not commandeering a radio station by gunpoint, but the story lives on. This myth becomes the central focus of Writer/director Stephen Kijak’s (and based on Lorianne Hall’s story) film.

Kijak intertwines Dean and Cleo’s stories throughout Shoplifters of the World. He allows us to see what is happening in both their worlds simultaneously and how their actions impact each other. In addition, Kijak also breaks the film up into chapters – all based on The Smith’s lyrics of course. The music, script, old footage, and easter eggs throughout are all homages to the band. For someone that is a fan of The Smith’s it may be the ultimate experience. Kijak goes as far to say that there is “enough buried treasure to keep the avid fan digging in for months on end, trying to connect all the dots and solve all the puzzles.” That’s great for The Smiths fanatics, but what about the average fan or regular ole movie lover? 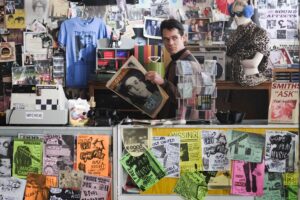 Kijak may have been too focused on revolving the script around song lyrics and forcing them in. Aspects of the script fall flat and drag on. Many of the characters deal with the complexities of life and finding more about themselves. The issue is the audience doesn’t truly care or connect with any of them. We see transformations abound and self-reflection, but it ultimately doesn’t provide to be meaningful for the viewer. That’s not to say the entire script doesn’t deliver. There are a few hilarious jokes and moments. On top of that, the relationship/dialogue between Dean and Mickey was enjoyable to watch unfold. Manganiello’s Mickey steals the show and is a joy whenever he’s on screen. For fanatics of The Smiths, Shoplifters of the World might just be the cult classic you’re looking for. For everyone else, it is a disappointing coming-of-age teen dramedy that you can pass on.