Home Reviews Khalil Review: ‘Phobias’There’s Little To Be Afraid Of In This Horror Anthology About...
Facebook
Twitter 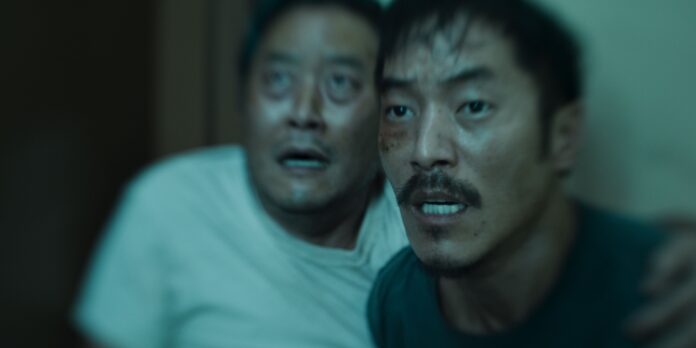 When we think of “fear” in horror movies, it’s generally the usual suspects: monsters, serial killers, etc. After all, they tend to generate the most scares as they are fantastical things that exist outside our normal everyday life. When’s the last time you saw a werewolf? That’s why they terrify some people when seen on the big screen. However, when you actually think of fears (or the clinical term of phobias), there are a huge plethora of things that disturb you. Hell, I didn’t even know what trypophobia is, but I sure as hell know that the sight of multiple holes makes me itchy and I desperately hate the visual. Even thinking about holes can fill me with dread! So, there are all sorts of real-life phobias that exist in our real world, and that’s what the Vertical Entertainment film Phobias tries to explore.

Operating as an anthology film, Phobias is directed by 5 different directors as it centers on 5 different types of phobias. Director Joe Sill takes a stab at “Robophobia” (fear or robots, drones, robot-like mechanics or artificial intelligence). Director Maritte Lee Go tackles “Vehophobia” (fear of driving). Director Chris von Hoffmann showcases “Ephebiphobia” (fear of teenagers). Director Camilla Belle explores “Hoplophobia” (fear of guns and firearms). Finally, director Jess Varley films “Atelophobia” (fear of not doing something right or the fear of not being good enough) as well as scenes filmed at the “Outpost 37” location, where mad scientist Dr. Wright (Ross Partridge) is trying to force his patients to relive their fears over and over in the hopes of weaponizing fear as a gaseous weapon. Who does he think he is, Jonathan Crane???

In the first phobia presented: Robophobia, actor Leonardo Nam is a computer programmer who’s constantly bullied and beaten up for being Asian by racist locals in his area (talk about poor timing), when he starts to be contacted by a mysterious AI that wants to “be his friend,” but at the same time, commits heinous crimes on his behalf. The film first seems like it’s solely going to be about Nam’s character, but then he wakes up at a facility where we get to meet the other unwilling patients at the mysterious Outpost 37. In the Vehophobia segment, Hannah Mae Lee plays a young woman who’s having car issues and constantly freaking out after her boyfriend leaves her. At first, it feels like we are going into Christine territory as this car is doing very strange things all on its own, but slowly but surely her backstory is revealed, and we find out that maybe she’s not as innocent as one would believe. The Ephebiphobia portion explores a woman (Lauren Miller Roge) who’s on the receiving end of a home invasion by a bunch of Children of the Corn type of teenagers who are ready to slice and dice her up. As this part of Phobias is explored though it’s revealed that she also is not as innocent in her actions and the kids kind of have a point (they just shouldn’t go on a murderous rampage to make it though). In the Hoplophobia segment of Phobias, reluctant patient Alma (Martina Garcia) is a former SWAT officer who now has severe PTSD after a raid goes bad and she kills an innocent kid for shooting blindly (again, talk about poor timing) and as a result, is now is forced to relive that worst moment of her life and how it affects her everyday life with her son. In Atelophobia, a manager (Macy Gray, yes that Macy Gray) at an architecture firm is dealing with new employees as she demands perfection. She just happens to go through extreme lengths in order to achieve it. As each of the patients has to explore their phobia for the sake of the cruel doctor’s experiments, they decide they have to find a way out of this place.

While each of the segments is directed well by each director and has some strong performances throughout each segment, Phobias has a weird “episode of the week” feel that would work for Black Mirror or some sort of television show that could focus on one phobia each episode, but not as a feature film, especially when it tries to tie everything together at the end. But making it an anthology film that then tries to tie everything together doesn’t work overall. Unfortunately, Phobias definitely has a “too many cooks” feel to it. It is interesting that the premise of the film can also shed light on the idea that there are different phobias that affect people in their everyday lives, and offer a different perspective on mental illness and mental health.

While the gore is well done and bloody when needed, Phobias also doesn’t really deliver in the scare department. For a film to be titled Phobias, it should be scary and perhaps delivers one semi-effective jump scare through its 1 hour 25-minute runtime. In addition, we are supposed to identify with these patients, but as their phobia is explored and we learn each of their backstories, it’s very hard to have sympathy for any of them as they all have done heinous things that led them to end up at Outpost 37. Sure, Dr. Wright and the soldiers detaining them are horrible, but they really aren’t that much better people than their captors. And that’s probably the biggest fallacy with Phobias, there really are no real “heroes” in the film. The only one close is the Robophobia character, and he has a pet AI that kills people for him without his consent. The characters in the film are just a bunch of bad guys that you have to kind of pick, who is more terrible than the other.

Overall, Phobias is challenged to make an engaging film showcasing different talents to provide a new perspective of fear, but unfortunately also tries to do too much and too little at the same time. And the film will probably not have the desired effect that it wants to have.

Phobias is currently available On Demand and in select theaters