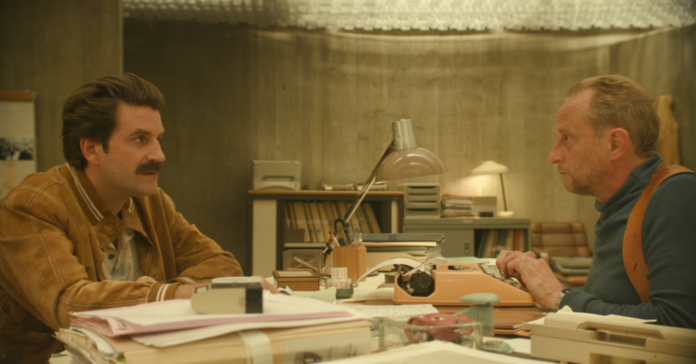 Louis Fugain (Gregoire Ludig) was going about his life when he stumbled across a body in Keep An Eye Out. It started out as a simple pedestrian night just like any other but ended up being far from it. Little did he know that reporting the body to the police would lead to him becoming the main suspect! Now the quirky Le Commissaire Buron (Benoit Poelvoorde) is on the case and interrogating Fugain. Buron likes to work at night, all night if need be, and has a hungry Fugain in for questioning. As the two men go back and forth, the peculiar Buron feels something is amiss – but what could it be? 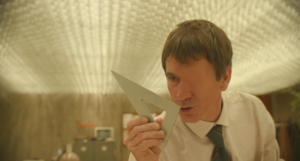 Keep An Eye Out is driven purely through dialogue. It couldn’t be more important that the script and the actor’s rose to this challenge. Luckily for writer/director Quentin Dupieux – Poelvoorde, Ludig, and the rest of the cast gave his excellent script justice. There are only a few characters in Keep An Eye Out and the film really focuses on a conversation between the two leads. Their chemistry is fantastic, and it truly looks like they had a joy making the film. The way they bicker with each other is entirely believable and the facial expressions, especially from Poelvoorde, are spot on. Poelvoorde’s Buron joins a long line of ridiculous detectives, one of the most recognizable being another French detective in Clouseau. Poelvoorde does such a great job as Buron that I wouldn’t hesitate to watch another film chronicling his exploits. 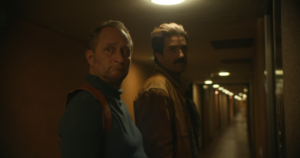 Keep An Eye Out is quite absurd, but in a good way. It has the feel of a Saturday Night Live sketch combined with a script playing with language reminiscent of Airplane!. Dupieux is able to take only a couple of settings, a very limited cast, and no shiny bells or whistles – and make a fun and memorable experience. Keep An Eye Out does leave you scratching your head at times, but that fits perfectly with the atmosphere Dupieux creates. Not all of it is supposed to make sense, and that’s okay. Dupieux has many little touches throughout – manipulating flashbacks, adding absurdities to characters to make them stick in your mind. By adding these, Dupieux is able to make a unique and refreshing product. In a world of sequels and remakes, Keep An Eye Out stands out and is absolutely worth a watch (and read).

Keep An Eye Out is available in select theaters and and virtual cinemas on March 5th, 2021.