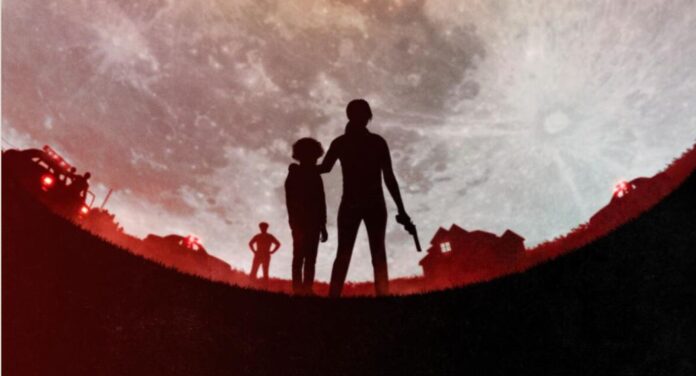 While we already have the American Horror Story franchise which gives us a fun semi-anthology horror series that focuses on a specific theme, Hulu and Blumhouse’s Into The Dark television series is a singularly fascinating concept. We most definitely get our horror fix, but instead of episodic television, each season of the show gives feature-length episodes according to a specific holiday. In the first season of Into The Dark: Halloween, Thanksgiving, Christmas, New Years’, and even the first day of school were explored. The second season has explored even more unique with horror films centering around Pet Appreciation Day, Easter, Saint Patrick’s Day, and the season finale centers on the Spring Full Moon in Blood Moon.

Esme (Megalyn Echikunwoke) and her son Luna (Yonas Kibreab) arrive in a small town in the hopes of finding some peace and quiet. But as we see in the opening of the film with her wielding a shotgun and some ungodly scream is in the background, it’s clear that they aren’t going to have any peace or quiet. As things unfold, it’s clear that Esme and Luna are “different.” She doesn’t allow Luna to make friends, she homeschools him, oh and she had to build a giant steel cage in the basement to house her son once a month when there’s a full moon.

If you were guessing we’re going into werewolf territory, good guess! And that’s a good thing too as often when we revisit monsters, we’re always stuck in the slasher phase of bringing the genre back. It’s cool once again to be fearful of shape-changing lycans.

Esme tries to keep a low profile. Of course, she befriends the local hardware store owner (Marco Rodriguez) she buys the steel cage from, which she says is for a chicken coop. She also must get a job to pay for the “chicken coop,” so she becomes a waitress at a nearby job. This brings the attention of the local sheriff (Gareth Williams), who might as well be wearing the words “bad guy” on his badge. After an encounter at the bar and his subsequent harassment, you know these two are going to collide, and not in a good way for him. Throughout Blood Moon, we get flashbacks of Esme and her romance and relationship with Luna’s father (Jack Yang). It’s a sweet courting, until he lets her in on his secret. While most people would turn and leave as soon as they find out their partner turns into a wolf once a month, she continues to love and support him, which gives an interesting window into how she loves and cares for her family, no matter what. And that’s primarily what Blood Moon is about. It’s really about a mother caring for her child, willing to go on the run and leave a trail of bodies in her wake, just to make sure that her son is okay.

It’s clear Blood Moon was filmed during the pandemic. The filming by director Emma Tammi, while great, is clear there was a limited number of people there. The cover of a small town works for the sake of the story as there are not many actors in the film, including barely 10 extras throughout the entire film. Unfortunately, this also possibly contributed to issues regarding actually seeing “the wolf” in the film. Much like the xenomorph in the original Alien film or Bruce in Jaws, you never get to really see the monster until the end of the film. Unlike those films where there’s a payoff, Blood Moon feels a little bit like a letdown. Throughout the film, you see all sorts of carnage in the wake of the wolf come every full moon (kudos to the makeup department), but when you finally see the monster in its final form it’s not as exciting as the buildup.

That said, Megalyn Echikunwoke and Marco Rodriguez give very good performances. Echikunwoke’s desperation as a mother who simply wants her monstrous son to be ok and Rodriguez as a worried neighbor work very well for the film as it prefers characters over spectacle. Blood Moon is entertaining regarding the dramatic elements as well as some of the suspenseful moments.

Into The Dark: Blood Moon is currently streaming on Hulu.

‘Only Murders In The Building’ Teaser: Steve Martin, Martin Short, And Selena Gomez Team Up For Hulu’s Murder Mystery Series