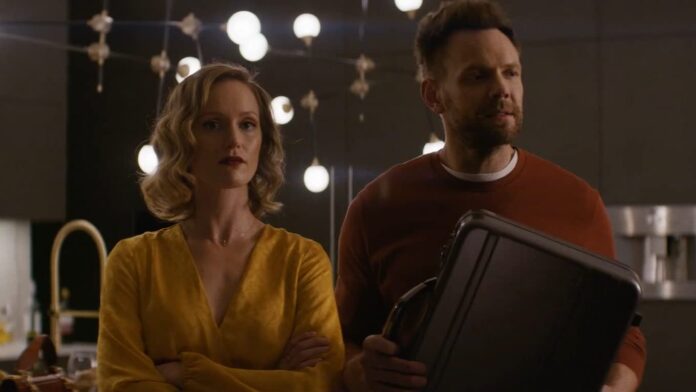 You never really know what people think about you, even your closest friends. Janet (Kerry Bishé) and Tom (Joel McHale) find that out the hard way in Happily. A married couple of 14 years, the two still act like newlyweds. They sneak away at parties to fool around, they never fight, and they seem happy. All of that really pisses off their friends, who can’t for the life of them figure out what is going on with the two of them. The couples in the group are constantly at each other’s throats and have lost that romance and magic years ago. Watching Tom and Janet has become insufferable and they are sick of it. So naturally when a couple’s getaway weekend approaches, the group decides to revoke their invitations. Cooler heads do prevail, but the awkwardness of getting un-, and re-, invited still lingers over the group.

Right before Tom and Janet are supposed to head to the couple’s retreat, they are visited by Goodman (Stephen Root). After a strange encounter Tom and Janet race to the house with more questions than answers. They are greeted by Patricia (Natalie Morales) and Donald (Jon Daly). Patricia seems happy to see them while Donald is just a dick. Shortly after Maude (Kirby Howell-Baptiste) and Carla (Shannon Woodward) arrive – neither of whom are happy to see them. Last to arrive is Richard (Breckin Meyer) and his newest boo Gretel (Charlyne Yi). Richard just wants to do puzzles while Gretel is too high to know what’s going on. They carpooled with Karen (Natalie Zea) who wants to sleep with Tom and Val (Paul Scheer) a famous chef who never wants to cook. With everyone there, Tom and Janet have no idea who to trust or who it was that sent Goodman.

Happily is the brainchild of BenDavid Grabinski who both wrote and directed the film, with support from Jack Black as one of the producers. Even more impressive is that Happily is the first feature film that Grabinski directed and only the second he wrote a screenplay for. This lack of experience is far from apparent. Happily not only has a smart and stellar script for most of the film but is easy on the eyes. Grabinski has a unique style that is fresh and is able to transform even mundane actions into a viewing pleasure. The film is full of comical moments and lines. The dialogue is witty, and the pacing is spot on. Grabinski also throws in topical references that connect you to the characters and add an extra humorous element to Happily.

The entire cast in the film does a wonderful job, especially Bishé and McHale. Everyone delivers their lines perfectly, nailing the comedic timing. As a film driven by dialogue, timing and chemistry are everything and we get that in spades. That being said, Happily isn’t perfect. The intelligent script and premise fall apart towards the end of the film and you are left scratching your head. A couple questionable narrative choices by Grabinski do stick with you. There was a chance for Happily to really set itself apart and have staying power in the dark comedy genre. The narrative wavering towards the end hurts this, but that doesn’t mean that Happily is not worth a watch. It’s an enjoyable and hilarious trip that you shouldn’t pass up. Make sure you stay watching through the credits for a little extra cherry on top.

Happily is available in theaters, on digital & on demand March 19th.