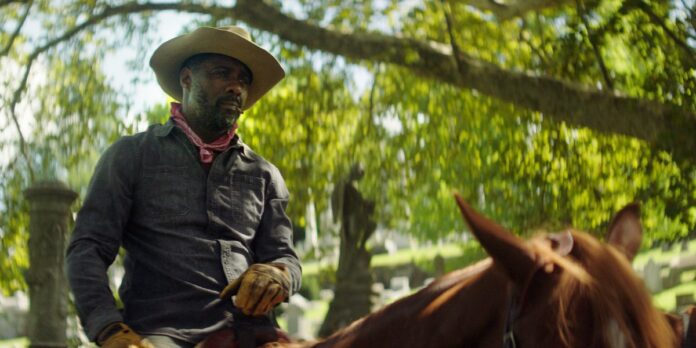 *NOTE: This is a reprint of my review from the Middleburg Film Festival*

On some level, I think we always knew there were black cowboys, but depictions of them on the big screen have been practically non-existent. That’s why a film like Posse, which featured a mostly-black cast and was released in 1993, caused such a stir because it disrupts the Hollywood idea of the cowboy as always a heroic white man. What I didn’t know is that black cowboys exist in the cities, and ride horses in the streets and run stables right there on city blocks. Ricky Staub’s directorial debut Concrete Cowboy embeds a fairly ordinary coming-of-age story within this fascinating subculture, but with the help of some great performances leaves you wanting to learn more about these modern-day frontiersmen.

Stranger Things actor Caleb McLaughlin is Cole, a kid who can’t stay out of trouble and his mother had had enough of it. So she scoops him up from the police and drives him from Detroit to stay with his father, Harp (Idris Elba), in north Philadelphia. Harp, like all of his friends and neighbors, is an urban cowboy, running the Fletcher Street stable just blocks away. Cole isn’t about that life at all; one of hard work and responsibility. On the other hand, he reconnects with old pal Smush (Jharrel Jarrome) who offers something different; a life of drugs, crime, fast money, but also a familiarity that Cole is desperately in need of.

Concrete Cowboy sets up a fairly straight-forward narrative for Cole to follow. He rejects the discipline and work ethic that Harp and others try to instill in him through working the stables (aka shoveling horsecrap), and instead slides into a dangerous life running the streets with Smush.  He’ll have to learn his lessons the hard way. We’ve seen this story before and Staub, who directs and co-writes the screenplay, doesn’t do much to give it any novelty. The bigger issue is that it also doesn’t do much to flesh out Cole as a character beyond his feelings of abandonment. While McClaughlin does an admirable job in the role, there’s simply not much to Cole for us to take much interest in, other than his connection to Harp.

Where Concrete Cowboy reaches wondrous levels is in Harp’s story and that of the cowboys he surrounds himself with. Mostly played by the real-life riders themselves, their stories are so rich with history that you could listen to them talk for hours and never get bored. At the same time, these people resent the way that lineage has been white-washed, erased so as to never exist. All of this is made tougher by the continued gentrification of the neighborhood, which has ruined the other stables and threatens to wipe them out for good. These cowboys are the last of a dying breed, fighting for a way of life that few know exists, but means a lot to those who do.

It makes you wish Concrete Cowboy focus could have been on them. Elba is a charismatic, quiet force as Harp, who not only feels the weight of the cowboy legacy on his shoulders, but a recognition of Cole’s pain and his part in causing it. The burden he carries is akin to the Old West sheriff who alone is charged with protecting the people of his town. His story and that of the horse-riders of Fletcher Street is what Concrete Cowboy should’ve been ALL about. Fortunately, as the real-life cowboys speak over the closing credits, we’re led to believe that this is just one of many stories and that there are more to come. Let’s hope.