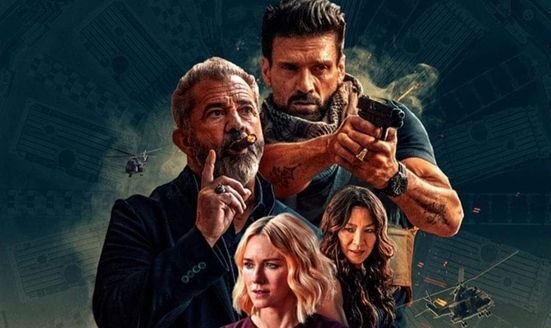 The other day I was playing (really, getting my ass kicked) by a new version of the video game Ghosts ‘n Goblins. I mean, this thing is hard as shit. It’s one of those side-scrollers we loved back in the day, where you slog through a seemingly endless wave of enemies to reach a boss. And if you die along the way, or even at the end, you basically have to start way back at the beginning or a far-off save point.  It’s infuriating, repetitive, but ultimately rewarding when you beat it, making you feel the destination was worth the struggle. That’s the feeling Joe Carnahan is grasping at, quite successfully, with Boss Level, the long-awaited action flick that finally gives Frank Grillo the spotlight role he deserves.

While the video game callbacks are great, including a whole sectiong where Grillo’s ex-Delta Force dude Roy Pulver plays 8-bit games with his son (Rio Grillo, yep, Frank’s real-life kid), in movie terms Boss Level is a little like if Source Code and Kill Bill had a bastard child. There’s a man-on-a-mission aspect, wrapped in a time-loop adventure full of crazy, colorful villains, including a sword-swinging Asian badass who speaks in the third-person, a tiny person with a bomb fetish, and a pair of German brutes played by MMA fighters Quentin “Rampage” Jackson and Rashad Evans. There’s even Rob Gronkowski wielding a giant helicopter machine gun. And Mel Gibson, hamming it up as the “final boss”, Colonel Clive Ventor.

While it’s the promise of Carnahan-directed action led by the credible Grillo that is the selling point, Boss Level has a legit story to tell when it probably doesn’t need to. Yes, we’ve seen our fill of time-loop films but Boss Level expertly uses it not only give Roy some actual human dimension, but to make some really funny gigs at his expense. Roy wakes up every day the same way. Some dude with a machete trying to take his head off, a helicopter raining bullets into his leased apartment (that it’s leased is a sticking point), only to escape and face wave after wave of goons out to kill him. Roy has no idea why the redneck dude keeps putting a harpoon through his chest, or why Guan Yin (Selina Lo) keeps slicing his head off. But he does find out, through, oh, a few hundred attempts, that it involves a secret project being worked on by his ex-wife (Naomi Watts), who he still holds a candle for. In the midst of all of this, Roy not only wants to reconnect with her, but also prove himself worthy of being a father to his son. In the midst of so much over-the-top carnage, Carnahan offers up a pretty good father/son story, as well. It’s a tough balance that Carnahan gets just right.

It’s clear that Carnahan, Grillo, and the entire cast, many of which Grillo has worked with before, are having a killer time on Boss Level. The script by Carnahan, Chris Borey and
Eddie Borey is jammed with one-liners and sight gags, but also inside digs like a shot Roy takes at Liam Neeson (who Carnahan worked with on The Grey and The A-Team) for being a fake tough guy. Of course, when you’re dropping jokes a mile-a-minute like Boss Level does, they aren’t all going to work. Repetition is to be expected in this kind of film but a bar sequence (involving the annoying version of Ken Jeong) is repetitive in the wrong way, and where a lot of the film’s tiring exposition takes place. There’s too much of it slowing things down and keeping us from what we want to see, which is Grillo kicking ass in increasingly bizarre scenarios. On the plus side, the bar scenes do give us Michelle Yeoh as a master swordfighter, and she can do more with a few minutes of screen time than most can in an entire movie.

Boss Level isn’t going to occupy a lot of space in your brain, and that’s fine. It’s the cinematic equivalent of the quarter-munching arcade games of the ’80s. You’ll be totally spent by the time it’s over, but the fun you had makes it all worth it and something you’ll want to play again and again.