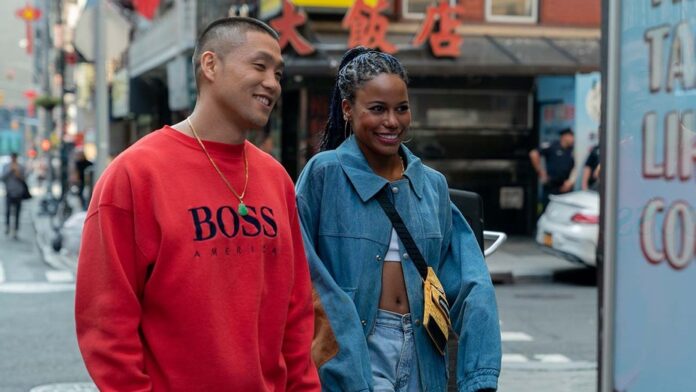 Alfred “Boogie” Chin is not Holden Caulfield. Boogie writer and director Eddie Huang goes out of his way to make it clear that his lead Alfred doesn’t have the privileges as the protagonist from J.D. Salinger’s quintessential coming of age novel The Catcher in the Rye. In fact, Alfred aka Boogie lacks many of the advantages needed in order to forge his own path, away from his dysfunctional family. In Boogie, Huang takes the coming-of-age story, long used as troupe for stories about young white men, and transforms it into an original yet faulty first feature.

Boogie (Taylor Takahashi) is a hotshot basketball player, in his senior year of high school, trying to figure out what he wants to do next and how to please his always at odds parents. In order to reach his dreams of being in the NBA, Boogie knows racism and tokenism lurks around every corner. His first obstacle is beating one of New York’s best high school basketball players (Pop Smoke). It’s a lot to handle for any kid and add a girlfriend into the mix – and  Boogie just feels overwhelmed.

Eddie Huang, known as a culinary giant in the food world, is no stranger to the screen. Since 2011, he has hosted many food-based television shows including Unique Eats and Cheap Eats for the Cooking Channel and Huang’s World for Viceland. His 2013 memoir, chronicling his childhood living in Florida in the 90s as the son of Taiwanese immigrants, was turned into the ABC hit TV show Fresh Off The Boat. Soon after the show’s premiere, Huang publicly renounced the show saying the network “tried to turn [his] memoir into a cornstarch sitcom and [Huang] into a mascot for America.”

With Boogie, Huang has complete ownership and control over this story. Huang brings us a fresh take on being the son of Chinese immigrants and the difficulties of balancing two conflicting cultural identities. Huang takes these previously done troupe and finds the nuance, showing us tea ceremonies traditions, not as big events but ingrained practices in Boogie’s family life. As a blogger and host of his own shows, Huang’s way of explaining is was always accessible without sacrificing his own identity. He applies this approach to Boogie. However, his script and direction teeter on melodrama. These moments don’t last long, but is perpetuated by lead actor’s Taylor Takahashi’s inexperience.

In his first major role, Taylor Takahashi falters as the titular character, giving us an inconsistent performance. Takahashi’s acting choices are too understated or over the top. However, Takahashi hits a middle ground when reacting to Huang’s character Jackie or Pamelyn Chee and Perry Yung’s Mrs. and Mr. Chin.

Takahashi at his best when he’s opposite Taylour Paige. Soon to be a household name with the upcoming Zola, Paige’s biggest role to date is as Ma Rainey’s girlfriend in the recent Ma Rainey’s Black Bottom. As Boogie’s love interest Eleanor, Paige milks everything she can out of the typical “girlfriend” role. With every glare, head turn and sarcastic remark, Paige is clearly in the process of mastering her craft.

Despite some cringey dialogue, including “My d*** might be trash,” Boogie is a strong attempt at a first feature from Eddie Huang. With a strong supporting cast, Huang is able to tell a completely authentic story. He hits the rim, just not the basket.

Boogie is available in select theaters. Watch the trailer below